Ford Motor Company (NYSE:F) said earlier this year that it will move production of the next-generation Focus compact, due in about two years, overseas -- mostly to China. Now we know the price tag for that move: $248 million.

Ford said this past week that it took one-time charges totaling $248 million against its second-quarter earnings to cover the costs of its decision to move production of the next-generation Focus out of North America.

Now, we should keep that in perspective: That's likely just a fraction of what Ford will save by making the upcoming all-new Focus in China. But here's why the decision to move the Focus cost Ford so much money. 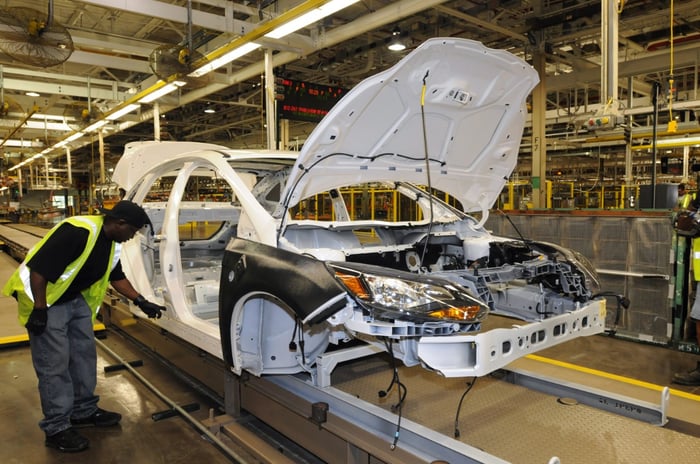 Ford's compact Focus is currently built at its Michigan Assembly Plant near Detroit. The next Focus will be built in China, freeing Michigan Assembly to build the more profitable Ranger and Bronco instead. Image source: Ford Motor Company.

Why Ford is moving the Focus to an overseas factory

First, some backstory. The current Focus is built in Michigan, but we've known for about two years that the next Focus would be built somewhere other than the United States. (That Michigan factory isn't closing. In fact, it might get busier: It'll build the new Ranger pickup and Bronco SUV instead.)

Ford had originally hinted that the next Focus would be built in Mexico, possibly in its existing factory in Hermosillo, where the Fusion sedan is made -- and possibly in a new  factory it planned to build in the Mexican state of San Luis Potosi.

But then two things happened: First, the market for small sedans in the U.S. began to shrink, with more buyers favoring SUVs instead. Second, Donald Trump got elected as president of the United States -- on a platform that promised to strongly encourage (to put it mildly) U.S. companies to build in the United States.

The upshot: Early this year, Ford canceled that planned factory in San Luis Potosi and said that it would move some products originally intended for Mexico back to its U.S. factories.

But those products don't include the next Focus: Ford said last month that the upcoming all-new Focus will be built in China instead. Why? Because U.S. sales of the Focus have been declining for years, and it doesn't make sense for Ford to commit a high-cost factory to making it for North America (or South America, as it turns out).

Why that decision cost Ford $248 million

So why did all of that lead Ford to take a $248 million charge? I asked Ford's chief financial officer, Bob Shanks, to explain:

We made announcements [earlier this year] around not building the Focus in Mexico, at Hermosillo. Instead, it'll be coming primarily from China, where we have our biggest global footprint for Focus production in the world. Some will come from Europe as well, but a little bit later than the initial job one. We had already done some work on the next-generation Focus in Hermosillo, so this [one-time charge] is a recognition that while we can reuse some of the tools and some of the other things that we had started to invest in there, some of what we did we can't or won't reuse. This is just the write-offs of that.

And there's a little bit of that also in South America, because we have decided we're not going to invest in South America for local production of the next-generation Focus.

Long story short: Ford had begun ordering new tooling or doing some work at the Hermosillo factory to build the Focus, and some of that work and tooling is now being written off, as is a small amount of work that had been done in South America. Those write-offs are the reason for Ford's $248 million second-quarter charge.