Is it David versus Goliath -- or a fairy tale versus reality?

It's not hard to make a case for Toyota Motor Corporation (TM -0.62%) as the world's best automaker. Toyota's relentless focus on manufacturing excellence has delivered outstanding quality and value for decades -- and won it a loyal following all over the world.

In fact, Toyota's methods are so well-regarded that the Toyota Manufacturing System (as it's called) has become the industry's standard. But some say that Tesla (TSLA -2.45%), with its sleek cars, electric technology, and talk of revolutionary new manufacturing processes, is set to disrupt Toyota and become the world's leading automaker.

That raises a whole slew of questions, but for now let's look at this one: Is Toyota or Tesla the better stock for investors right now? 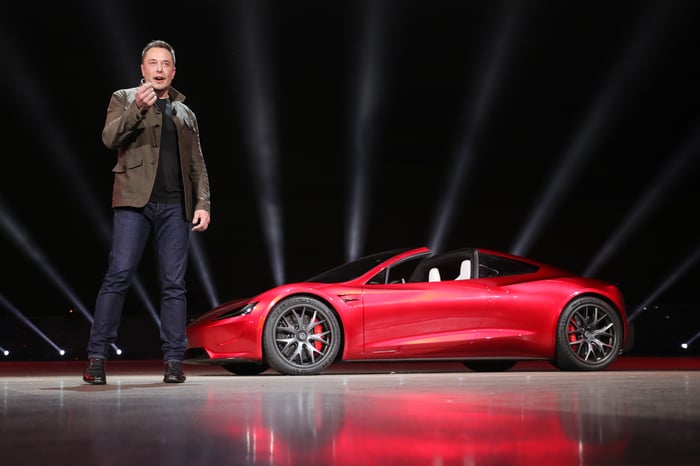 There's no doubt that Tesla CEO Elon Musk knows how to get fans excited about the future. But so far, his track record of delivering on his future promises is mixed. Image source: Tesla, Inc.

Tesla and Toyota: By the numbers

Data sources: Tesla, Toyota, and Thomson Reuters. Toyota's sales are rounded to the nearest thousand and include sales by unconsolidated joint ventures in China. Tesla's sales are its global deliveries as reported by Tesla at the end of each quarter.

The numbers tell us that at this point in its history, we can't fairly evaluate Tesla with the same metrics we'd use with an established global automaker.

Instead, we need to look at what's really driving Tesla's stock price: its story.

With Tesla, it's all about the story

It's hardly a secret that Tesla didn't get to a market cap of over $53 billion because of the strength of its current numbers. Frankly, its recent numbers have been awful: Huge (and growing) losses, and sales that have fallen short of its ambitious goals.

Tesla's market returns have been driven almost entirely by its story. As corporate stories go, it's a doozy, one of the most exciting in years. As its fans see it, CEO Elon Musk is inventing the clean-energy future right before our eyes. Tesla's promise isn't just about its cars, it's also about solar electricity and low-cost energy storage -- a whole clean-energy ecosystem that "just works," Apple-style. To those fans, Tesla's growth potential seems unlimited.

When I say "unlimited," I'm not exaggerating much. This past spring, Morgan Stanley's auto analyst, Adam Jonas, issued a note estimating Tesla's eventual total addressable market at $15 trillion. As I said at the time, that's about 20% of the gross domestic product of every single country in the world, combined.

Of course, Jonas has been one of the loudest Tesla bulls on Wall Street, and even he has tempered his near-term expectations as Tesla has struggled to get its long-awaited "mass-market" vehicle, the compact Model 3 sedan, into full production.

At one time, Musk had predicted that Tesla would build 100,000 to 200,000 Model 3s by the end of 2017. It's clear now that the company is going to fall far short of that goal: InsideEVs estimates that Tesla managed to ship just 712 Model 3s through November.

That's an example of the conundrum that Tesla presents to skeptical investors. On the one hand, its potential seems huge. On the other hand, the company has repeatedly fallen far short of its (admittedly wildly ambitious) goals.

So far, those missed goals haven't dented the company's story enough to really hurt the stock. But given Tesla's exceptionally lofty valuation, that's a question that has to be on our minds: At some point, will the story lose credibility?

There's another concern: The U.S. new-vehicle market is likely past its cyclical peak. How will Tesla fare in a recession, when demand for new vehicles (electric or otherwise) falls significantly and capital markets tighten? It's not an exaggeration to say that such a scenario could call Tesla's survival into question.

Meanwhile, Toyota is just cruising along

Nobody (aside from a few ill-informed Tesla fanatics, perhaps) seriously thinks that Toyota's survival is likely to be called into question any time soon. Toyota is a giant global automaker with steady profits and a much-envied (and rightly earned) reputation for quality and value, the products of its vaunted and much-imitated manufacturing system. It's hard to beat Elon Musk as a showman, but Toyota CEO Akio Toyoda is no slouch on that front -- and few question that Toyota will deliver on his promises. Image source: Toyota Motor Corporation.

And while Tesla's green story is one for the ages, Toyota is hardly a green slouch: It's the world's leading manufacturer of gasoline-electric hybrids, at the forefront of hydrogen fuel-cell research and development, and gearing up for a major push into battery-electric vehicles -- possibly with some new and proprietary battery technology.

It's entirely possible that 10 or 15 years from now, Toyota will be one of the world's leading builders of electric vehicles. I would even say it's likely. But as for profit growth, there will probably be some over time, but it's nothing compared to what Tesla investors are expecting.

So where does that leave investors?

I've always been skeptical of Tesla's story. It's just too... big, too ambitious, and far too quick to discount the strengths of the established auto giants. The realities of manufacturing electric vehicles aren't different enough from manufacturing internal-combustion vehicles to confer any sort of significant advantage on Tesla.

So which is the better buy? With Tesla, you get a chance at a big payoff, but it's still very much a long shot: There's a real risk of bankruptcy, especially if a U.S. recession sets in before the company gets to full-scale production. Toyota, on the other hand, doesn't have much profit-growth potential, but it's a well-run company that pays a decent dividend -- and while its profits will shrink when that recession arrives, it's not at any real risk.

Long story short: At this particular moment, at current valuations, I'd choose Toyota over Tesla for my portfolio without hesitation. But this might be one where you have to make the call yourself.