2017 was a rough year for American Outdoor Brands (NASDAQ:SWBI), both from an operational and a market perspective. Sales plunged as the year went on as demand for guns dropped, and starting in June the stock began a nosedive that doesn't seem to have stopped.

As the calendar rolls over to 2018 and investors assess their portfolios, it's worth asking if American Outdoors is a value stock at this point. The answer may surprise you. 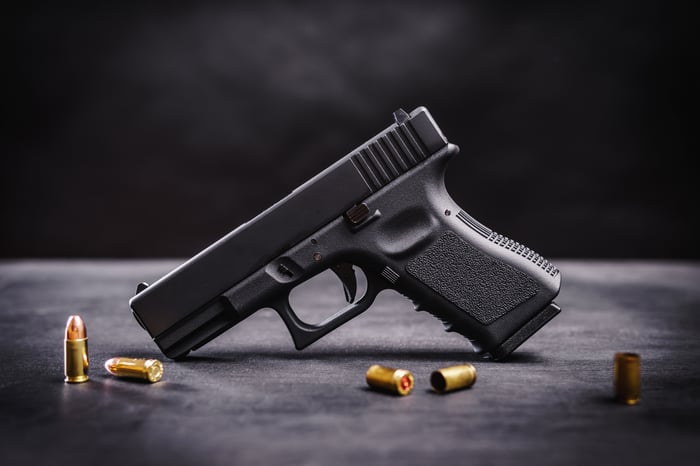 Fiscal second-quarter sales at American Outdoor Brands dropped 36% versus a year ago to $148.4 million, and net income plunged 90% from $32.5 million to a measly $3.2 million. The drop in results can be directly attributed to the national political environment, which is very favorable to gun owners.

It may seem counterintuitive, but gun sales typically jump when people fear gun regulation, and the fear of regulation under President Obama (and potentially Hillary Clinton) has subsided under President Trump. Here's what CEO James Debney had to say about the surge in sales ahead of last year's election:

Total revenue for the quarter faced a challenging comparison to last year, when we believe strong consumer demand was driven by personal safety concerns and pre-election fears of increased firearm legislation.

President Trump's term lasts another three years, so it's unlikely there will be much of a political threat for gun control in the next few years. That'll keep sales and profits down for American Outdoor Brands.

Inventory is now a problem

With demand down, gun manufacturers who have increased supply in recent years are now stuck with both excess inventories and excess manufacturing capacity. Management said they're reducing production and they've outsourced capacity to adapt to the market.

The challenge overcapacity and high inventory create is a race to the bottom for manufacturers. It's costly to just shut down capacity, so it may be more effective to discount products to increase production and keep plants running. But discounts lead to lower margins and erodes pricing power.

Inventory just started to become a problem in mid-2017, so investors should watch for this to be a big headwind in 2018. That's what happens when years of growing production are met with a sharp cut in demand.

No value for investors

Fiscal 2018 guidance is now for $0.33 to $0.43 per share in GAAP earnings and $0.57 to $0.67 in non-GAAP earnings, which pulls out the writedown of acquired assets. Even at the top end of that range, the stock trades at nearly 20 times forward earnings, which is a steep price for a company that's shrinking.

If a recovery were around the corner, or if American Outdoor Brands's stock seemed like a great value, I could see buying shares. But right now the political environment will keep gun sales down for the foreseeable future, and that will be a drag on both operations and the stock.