Income investors know that finding great investments involves more than just picking stocks with high dividend yields. You have to consider a company's long-term growth potential, and its ability to consistently pay -- and raise -- its dividend as well. To help with that task, we asked three Motley Fool writers to pick three top dividend stocks with yields higher than 2% that they'd recommend for income investors' portfolios today. They came back with Intel (NASDAQ:INTC), International Business Machines (NYSE:IBM), and Verizon Communications (NYSE:VZ). 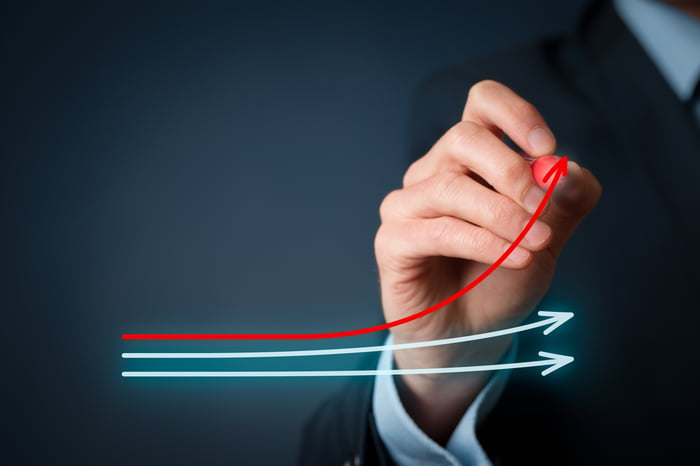 Tim Brugger: (Intel): The self-proclaimed "data center first" provider is coming off its third straight record-breaking quarter. Yet despite its stellar performance in 2017, the headway it is making in burgeoning markets, and its solid 2.3% dividend yield, Intel's stock is valued well below shares of its peers.

At 16.7 times trailing  earnings, Intel is a bargain compared to its peer average of 27.1. It may not be reflected in its share price, but the company's sales of components for the Internet of Things (IoT), cloud data centers, and memory solutions are growing  at record levels.

Last quarter, data center revenue rose 7% to a record-breaking $4.9 billion. The memory solutions group's revenue soared 37% to $891 million -- another record. IoT sales were up 23% to $849 million for -- you guessed it -- a quarterly record. Results from its legacy PC unit, by contrast, were fairly flat at $8.9 billion.

Add in the programmable solutions unit's 10% increase in revenue to $469 million, and total sales climbed 6% to $16.1 billion. It wasn't long ago that the company couldn't have booked top-line growth when its PC results were so-so, but Intel is now an IoT and data center provider, and it shows.

Intel is also focused on becoming more efficient, and its initiatives in that vein are on track. It cut operating expenses 11% over the past year to $15.76 billion, and the third quarter's $4.94 billion in overhead was a 10.5% year-over-year decline. Those improvements helped propel a 36% jump in earnings per share to $0.96 and a 15% improvement in operating income to $5.1 billion, both new Intel records.

Growth, value, and income are nice combination, and Intel offers them all.

Danny Vena (IBM): International Business Machines has been in the Wall Street spotlight for several years now, and not in a good way. It has produced 22 consecutive quarters of year-over-year revenue declines, and investors have grown impatient for its turnaround to materialize.

In its most recent quarter, IBM's revenue was flat compared to the prior year quarter, leading some watchers to suggest that the company could return to growth this year.

IBM has been reinventing itself, making significant investments in AI, and banking on its strategic imperatives units -- which also include cloud computing, data, cognitive computing, and security -- to lead it back to growth.

Those initiatives are beginning to bear fruit: The strategic imperatives businesses produced $35 billion in revenue over the trailing 12 months, and grew to account for 45% of IBM's total sales. In the most recent quarter, those business lines grew 10% year over year and produced $8.8 billion in revenue.

While investors wait for the transformation to gain more steam, they can benefit two ways. IBM has been aggressively repurchasing its stock, spending $3.7 billion in 2017 for nearly 23 million shares, and has $1.5 billion remaining on its current authorization. IBM has also paid $4.1 billion in dividends, with a current yield of 3.84%. The company is currently only paying out a healthy 48% of its profits, so it has room for increases.

Big Blue is also cheap at 13 times trailing earnings, so it shares offer a rare combination of value, growth potential, and an above-average yield.

The long-term stability of a leading telecom

Chris Neiger (Verizon Communications): Sure, Verizon may not be a fast-paced growth company, but there's a lot to love here for dividend investors. Its dividend yield is currently 4.4%, and it has raised its dividend for 11 consecutive years.

That should be tempting enough for income investors, but the telecom giant's dominance in wireless connectivity should help convince the skeptics. It's the nation's No. 1 wireless carrier by customer count, and though rivals T-Mobile and AT&T have made recent gains, they still don't match Verizon's reach.

The company was able to propel itself ahead of its competitors by making early investments in 4G and LTE connections, and now it's making similar moves in the 5G arena. 5G wireless promises to make home broadband connections faster, and with less data lag and infrastructure hassle than copper lines.

Verizon tested its 5G wireless broadband in 11 cities in 2017, and will roll out a commercial product in five markets in 2018. AT&T is conducting its own 5G trials as well, but Verizon is on track to beat its rivals to 5G like it did with LTE; that first-mover advantage could give it an edge over its rivals in the coming years.

Additionally, Verizon launched the very first nationwide Internet of Things network in 2017, which lets data-sipping IoT devices (from smartwatches to industrial shipping containers) access LTE networks for data transmission and analyses. An estimated 24 billion IoT devices will be online by 2024, and Verizon is gearing up now to profit from that growth.

If all of that weren't enough, investors should remember that Verizon has also been busy expanding its content opportunities as well, through its purchases of AOL and Yahoo!. With all of these moves, it has positioned itself for continued dominance, while consistently raising its dividend payout.