Artificial intelligence, augmented reality, driverless cars, and myriad other tech trends fill up the news feeds these days. But there's a more subtle tech transformation that's happening right now that's actually making many of these technologies a reality (or, at least helping them grow).

I'm talking about the Internet of Things (or IoT), which is the connection of formerly unconnected things to the internet. A thermostat that connects to your home's Wi-Fi is an IoT device, as are internet-connected semi-autonomous vehicles, smartwatches, and smart-home speakers.

All of these devices -- and the services connected to them -- have created a nearly $2 trillion market this year, and they're just getting started. By 2020 there will be nearly 20 billion things connected to the internet, with a total market size of about $3 trillion, according to research firm Gartner.

All of this potential is why investors need to take notice of what Alphabet (NASDAQ:GOOG) (NASDAQ:GOOGL), Amazon.com (NASDAQ:AMZN) and Skyworks Solutions (NASDAQ:SWKS) are doing with the IoT right now. None of these companies are IoT pure plays, but each is dominating the IoT in ways investors shouldn't ignore. 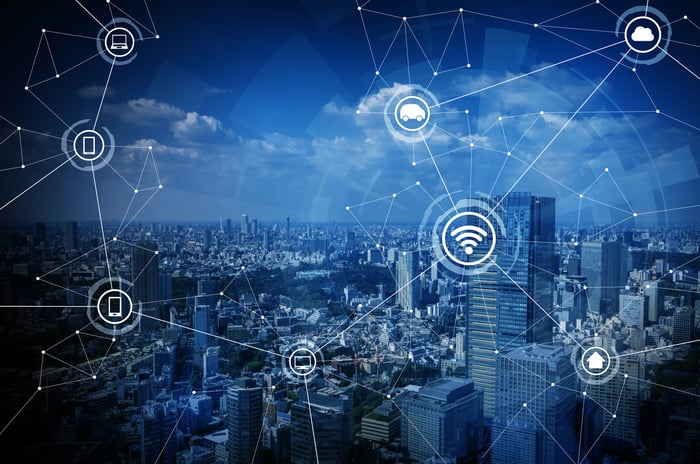 Alphabet's Google knows that typing search queries into a webpage isn't going to be a primary way of navigating the internet very soon. Voice searches are taking over and accounted for 20% of mobile searches last year. And that's why Google has begun focusing its attention on voice-enabled IoT devices.

Google Assistant -- the company's voice-enabled virtual assistant -- is packed inside of the company's new Google Home, Home Mini, and Home Max smart-home speakers. Each of these devices sits in your home and lets users do things like ask about the weather, search Google, and use voice commands to connect to other IoT devices in the home.

The IoT potential here for Google is two-fold. First, the company can sell devices in the growing smart-speaker market. These devices will be in an estimated 75% of U.S. homes by 2020 and become a $13 billion market by 2024.

But the second, and most important, opportunity for Google's smart speakers comes from its online search -- and advertising -- dominance. Think of it this way: When you make any type of Google search (text or speech), Google uses that information to serve you more relevant ads. So as Google Assistant is used by more people through its smart-home speakers, the company has access to even more information about what its users are interested in, what they're buying, what they're searching for, etc. That information can then be used to serve users even more precise ads.

That may seem like a very subtle play in the IoT -- and it is -- but that's exactly how Google works. It gathers as much information about its users as it can so it can serve ads to them, and brings in 88% of its total revenue doing it.

Amazon has some of the same opportunities in the smart-speaker space as Google, except it's in an even better position to benefit. The company now has about seven different versions of its popular Echo smart speaker, each with its own focus on smart-home connectivity.

Amazon's Echo devices come with the company's Alexa virtual assistant, and Amazon is dominating the smart-speaker space with 70% market share right now. That's good news for Amazon as the smart-speaker market expands, but it also offers additional upside for the company.

That's because the Echo not only answers questions and can control smart-home devices like Google's IoT speakers can, but it also can order things directly from Amazon's platform. The company has made it easy to reorder items its Amazon customers have already purchased -- or make a new purchase -- with just a simple voice command. And analysts at RBC Capital believe that sales of Echo devices and sales through the devices could add $10 billion to Amazon's top line by 2020. 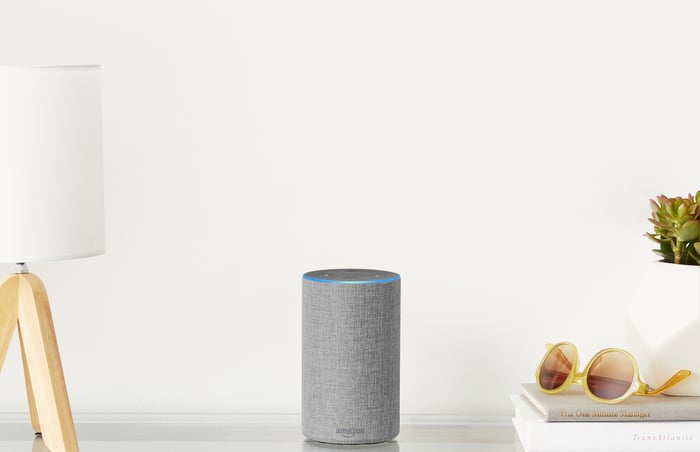 Amazon also has a huge opportunity in the cloud IoT space, which is expected to be worth $7 billion by 2021. The company is the leader in the public cloud right now and even has its own IoT platform within Amazon Web Services specifically for creating and launching IoT devices. Because of its current position, Amazon's AWS will likely be the service many developers and companies choose as more IoT devices are brought online.

The small, but strong, IoT play

Skyworks Solutions may seem out of its element on this list of stocks, but don't underestimate this IoT connectivity play.

Skyworks is a key chipmaker for the likes of Apple, Amazon, Samsung, Cisco, and plenty of others. The company makes most of its top line from sales of connectivity, power amplifier, and other chips for mobile devices.

But Skyworks has already begun an important shift to IoT chips, primarily for connected vehicles, and it's already paying off. The company brought in 26% of its sales from "broad market" chips (which includes the IoT) in its fiscal fourth quarter 2017, and it's betting that demand could explode over the coming years.

He added that there will be 75 billion connected devices by 2025 and that the company is well-positioned for the shift from 4G to 5G connections. He also said on the same call that:

There's more to do. But what I think about really is we can call it mobile, we can call it connected, but there's definitely a big change in this industry, it's cloud-to-client, it's driverless cars, it's IoT, it's 5G smartphones. There's no question that the opportunity in those markets is unmatched.

The company's connectivity chips in vehicles are used for things like collision avoidance, but they're increasingly being used to connect cars to the internet for semi-autonomous and autonomous capabilities. These vehicles, and other IoT devices, will need the latest 5G cellular connectivity chips for data transfers and analytics -- and Skyworks has the technology to make it happen.

As with any investment, you should take the long view with the IoT. There is plenty of evidence showing that the Internet of Things will be huge, but  the IoT's expansion will likely be more subtle and slower than, say, the explosion of smartphone sales over the past few years. Alphabet, Amazon, and Skyworks are already at the forefront of the IoT -- and their current positions will likely keep them there as this market expands.