The S&P 500 (SNPINDEX:^GSPC) posted a better than 20% gain in 2017, giving investors in the index their best year since 2013. Yet even though many stocks had extremely strong performances over the course of the year, a few laggards didn't participate in the rally. In fact, three companies that were in the S&P 500 at the beginning of the year managed to lose half or more of their value during 2017. Below, we'll look at the two stocks that are still in the S&P 500 and the one that got booted out of the index to see whether any of them has a good chance to recover in 2018. 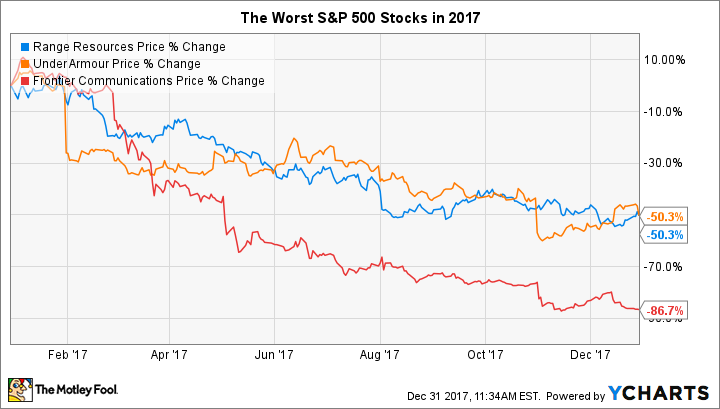 Frontier Communications (OTC:FTR) was the worst performer by far among these stocks, and its poor performance earned it a ticket out of the S&P 500 early in the year. The overseers of the index noted that Frontier's market capitalization had fallen below the acceptable range in March, even before the telecom company suffered the worst of its losses.

Frontier suffered a horrible 2017, with its major acquisition of assets in the key markets of Texas, Florida, and California turning out far worse than investors had hoped. By May, the company had decided to slash its lucrative dividend by more than 60% amid high customer churn rates and continued net losses. A 1-for-15 reverse split also highlighted Frontier's difficulties in keeping its share price high enough to avoid delisting concerns. With ongoing trends toward cord cutting, many investors have a hard time seeing much hope for Frontier's future.

Range Resources (NYSE:RRC) managed to stay in the S&P 500 throughout the year, but its 50% drop wasn't a pleasant experience for shareholders. Even though crude oil prices continued to rise during 2017, Range Resources concentrates more of its attention on natural gas production, and prices in the natural gas market failed to keep up with their counterparts on the oil side of the business. 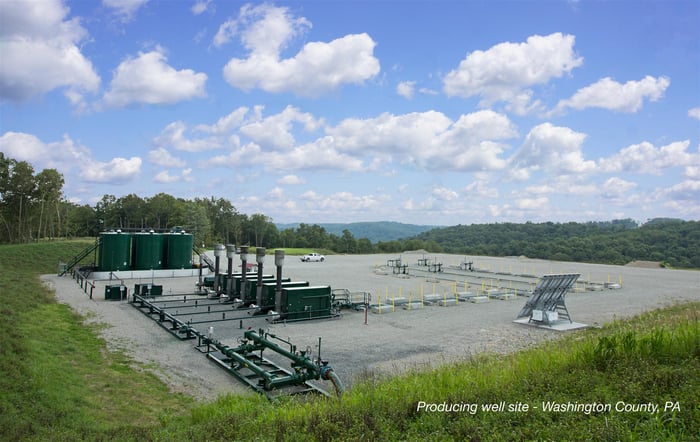 Investors are far more hopeful about Range Resources' prospects for 2018 than they are about Frontier's. Range has a strong presence in the promising Marcellus shale area, which could bring stronger production in the coming year. Longer term, investors in natural gas hope that the rise of exports through liquefied natural gas terminals could support prices in the domestic market, giving companies additional options beyond selling their gas production to U.S.-based consumers. If the cycle turns for natural gas, Range Resources' low costs could make it a big winner.

Under Armour stays under attack

The athletic apparel industry has been a huge growth driver in recent years, and Under Armour (NYSE:UA) (NYSE:UAA) has been one of the most impressive new entrants to the business. Standing up to much larger competition, Under Armour had strong stock performance coming into 2017, but this year proved to be a difficult one. The primary culprit: rising competition from overseas giant Adidas, along with changing trends that have detracted from Under Armour's youth, women's, and outdoor areas. Difficult conditions in the retail space have also hurt Under Armour, with one major sports-oriented big box retailer going bankrupt and others seeing sales pressure.

Under Armour has bounced back in the past month from its worst levels of the year, as those following the stock see promise for the company to mount a comeback in 2018. Yet even after its big decline, Under Armour stock is still richly valued compared to the larger companies in the industry. To succeed, Under Armour will have to figure out how to deal with consumers who are more interested in getting products directly from producers rather than through retail partners -- all the while figuring out how to preserve the fashion value of its brand.

2017 was a great year for the S&P 500, but these stocks missed out. Frontier Communications looks like it's running out of options, and Under Armour faces major challenges, but Range Resources might be in the best position to rebound in 2018.