After a rough couple of years, SunPower (NASDAQ:SPWR) is starting to find its way. It's focused on supplying its high-efficiency X-Series solar panels to the residential and commercial markets, where customers with limited space to install panels value the greater power output. It is also able to add complementary services like energy storage; it has a $60 million pipeline for commercial projects in that segment alone.

But it has long lagged in the power plant business, where low-priced Chinese panels were more cost effective for developers than SunPower's high-efficiency panels. To compete meant accepting thin margins on power plant sales, so eventually, SunPower gave up on selling its high-efficiency technology for those uses. Instead, it acquired technology that it developed into its P-Series solar panels, which are made of cut-and-shingled cells in a way that offers higher efficiency than standard panels, but at a competitive cost. The company sells these panels in combination with a fully engineered system of racking, inverters, wiring, and cleaning called Oasis that's intended to be a full solution for developers. A new P-Series panel could change SunPower's fortunes and turn its power plant business into a winner again. That makes it the company's most important product of 2018. 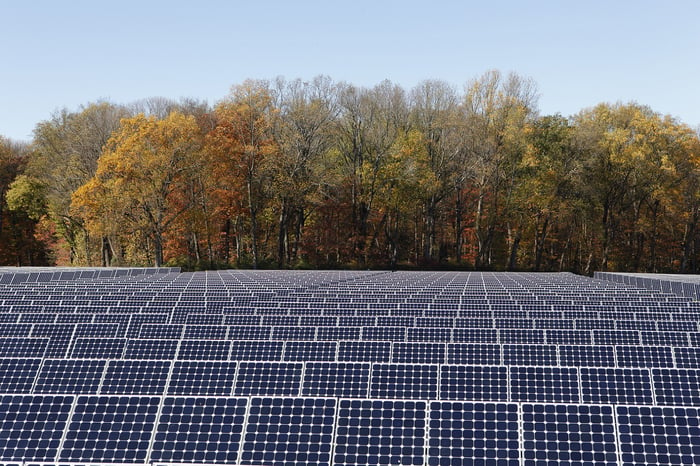 The P-17 panel, which peaks at 17% efficiency, has been around for about two years, but SunPower's management said earlier this year that it would soon be launching its P-19 model. The implication was that the panel would be 19% efficient -- less than the 23% efficient X-Series panels but still more efficient than First Solar's 17% efficiency offering -- or most multi-crystalline panels, which are between 15% and 17% efficient.

SunPower hasn't officially debuted the P-19, but I recently found a data sheet that asserts that it ranges from 18.7% efficiency all the way up to 19.6%. Cells that form the panel are mono-crystalline, which are more efficient than standard multi-crystalline cells, and are also the base for SunPower's X-Series panels.

What I found interesting about the data sheet is that it doesn't indicate that the P-19 panels are made with mono-PERC cells, which are more efficient than mono-crystalline alone. SunPower's joint venture in China owns a 1.2 GW mono-PERC plant, and management has indicated that they'll eventually use cells from that plant to make P-Series panels.

If SunPower can make a 19.6% efficient panel with mono-crystalline cells, then its results with mono-PERC would likely be higher, perhaps 21% or more. That could provide the kind of differentiation that would lead to both high demand and high margins for its power plant business.

Is a financial turnaround coming?

If improving efficiency in P-Series solar panels and the Oasis power plant design can increase margins to even the mid-teens, it'll be a huge win for SunPower. The company should have around 1.6 GW of P-Series production capacity at the end of 2018, and as much as 6 GW in 2021, which could drive $3 billion or more in sales annually (assuming a conservative $0.50 per watt), but it will have to achieve higher margins for the product to be a success.

Watch production and bookings for P-Series in 2018, particularly the new P-19 product. If it brings higher margins, it could be SunPower's key to unlocking profitability and potentially strong returns for investors.

Not only do I own shares of SunPower, I'm keeping a bullish CAPScall on my CAPS page, where you can track my picks and how they perform versus the market in the long term.