It's no secret that 2017 was a terrible year for retailers. Amidst the rise of e-commerce, brick-and-mortar stores saw more closures than any year on record. All told, there were at least 6,700 store closings announced last year, according to retail think tank Fung Global Retail & Technology, as talk of a "retail apocalypse" swept the market. While much of the stock market boomed, retail stocks, especially department store and apparel chains, slumped, with the valuations of even solidly profitable companies falling into the single digits.

The chart below shows a few of the stocks that got hammered. 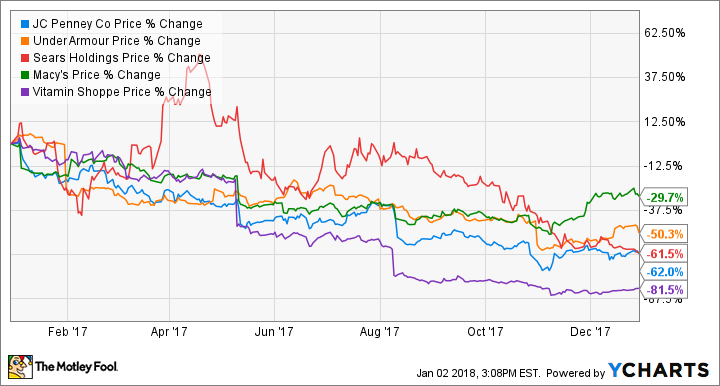 However, 2018 is a new year, and retail stocks are already flying out of the gate, with the SPDR S&P Retail ETF up nearly 2% on opening day. Let's take a look at a few reasons why retail stocks could be in for a better year in 2018. 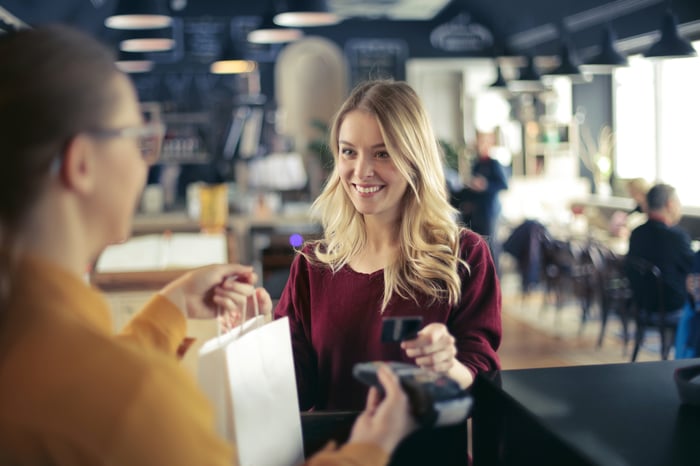 Something unexpected happened in November: retail stocks suddenly started moving higher. An upbeat earnings report from Macy's (NYSE:M) kicked off a better-than-expected third-quarter earnings season, and retailers including Walmart (NYSE:WMT), Gap, Abercrombie & Fitch, and Urban Outfitters all flew higher after turning in strong results. Though comparable sales growth was modest or even falling at several big-name retailers, the round of reports seemed to indicate that the retail apocalypse has been exaggerated and that mall-based chains are finding ways to adapt to shifting consumer habits by embracing omnichannel selling and having more employees ready to assist customers when they come into a store. Best Buy offers an excellent example of this strategy.

Then, retail stocks got another jolt after Black Friday weekend after a number of research outlets reported that it was the strongest opening weekend to the holiday season in years. ShopperTrak found that online sales jumped 18%, counteracting a 1.6% decline in store visits on the Thursday and Friday of Thanksgiving week, and the National Retail Foundation said that 174 million Americans went shopping over the Black Friday weekend, more than the 164 million it had projected. Retail stocks jumped again the day after Christmas, indicating a strong finish to the holiday shopping season, and rose again to start the new year. Department store chains are expected to report holiday sales later this week or next week. If results meet or exceed expectations, sector stocks should continue to rise.

2. Americans have more cash to spend

The macroeconomic environment these days leaves little to be desired for retailers. Unemployment and gas prices are low; the stock market is at a record high; consumer confidence is up and the economy is strong. Such an environment is generally ideal for retailers, as it encourages more Americans to shop.

Thanks to the tax bill passed by Congress at the end of last year, Americans are likely to see their paychecks rise as tax rates fall. While it's not totally clear how much the average American will save, most households will see their tax rates fall, and the average household will get a big initial cut, according to the Tax Policy Center (though the difference will moderate over time). Still, employees should start seeing bigger paychecks this month, which could lead to a windfall for retailers.

Additionally, 18 states raised their minimum wage on January 1, and while some states will only see a modest uptick each year due to cost-of-living adjustments, others are implementing sizable increases. Some large states raising the minimum wage significantly include California and New York, which make up close to 20% of the country's population. In New York City, the minimum wage for companies with 11 or more employees just went up from $11 to $13, and the minimum wage in the rest of the state jumped from $9.70 to $10.40. Meanwhile, in California large companies will now pay a minimum wage of $11, up from $10.50. Those wage hikes should put some extra pocket change in the hands of those ready to spend.

3. Taxes are going down

American consumers aren't the only ones getting tax breaks. Corporate taxes are also going down, from 35% to 21%, and those, unlike income taxes, are permanent. Retailers (and restaurants) will benefit more than any other sector from the tax break, as those companies, unlike other industries that already benefit from a bevy of tax breaks, usually pay 35% if not more in taxes when state and local taxes are factored in.

As I've explained previously, a tax cut from 35% to 21% will lift net income for retailers by more than 20%. That increase in profits should not only lift stock prices as it helps valuations, but also amounts to real cash that companies can use to improve operations and make themselves more competitive, or return to shareholders in the form of dividends or share buybacks, which would also help boost stocks.

The political win is quite a turnaround from a year ago, when retailers were fearful that a border tax would force them to raise prices on goods.

With tax savings and tailwinds from a booming economy, retailers could be in store for a surprisingly strong 2018. While e-commerce will continue to grow and take share from brick-and-market chains, companies like Walmart, which is opening 1,000 more grocery pickup locations, are adapting to the changing nature of consumer spending, using their store base as an advantage over competitors like Amazon.

Keep an eye on holiday sales reports coming up and earnings reports in February. A strong round of results could set the tone for a retail recovery this year.