Floating 4.4 light-years from Earth is the Alpha Centauri star system, a trio of stars labeled Alpha Centauri A, Alpha Centauri B, and Proxima Centauri. At a distance of just 24.9 trillion miles, these three stars collectively constitute our sun's nearest neighbor.

In 2016, astronomers in Chile detected the presence of an Earth-sized planet orbiting in the habitable zone surrounding the smallest of these three stars, the red dwarf Proxima Centauri. And now, NASA wants to pay it a visit. 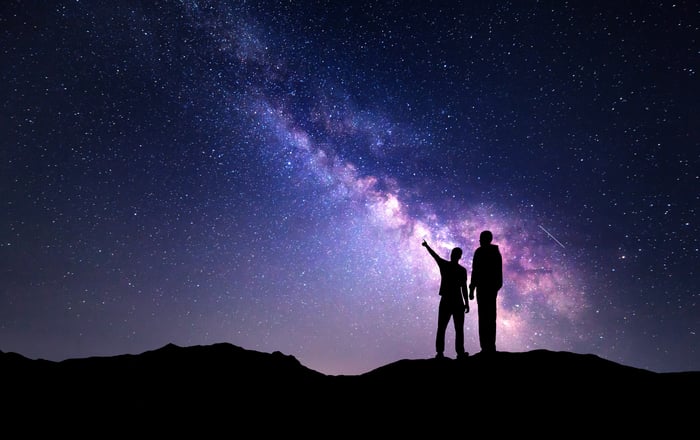 Congress wants a space engine that can travel to the stars. Three stars in particular. Image source: Getty Images.

Late last year, scientists at NASA's Jet Propulsion Laboratory (JPL) presented a plan to the American Geophysical Union conference in New Orleans, proposing that in honor of the 100th anniversary of man landing on the Moon we launch a mission to Proxima Centauri in 2069.

This would almost certainly not be a manned mission. (Currently, the fastest spacecraft ever launched from Earth would need 18,000 years to travel the distance from here to Proxima Centauri, which is somewhat longer than the average astronaut's shelf life.) Still, in 2016 Congress instructed NASA to study the potential for building spaceships capable of much faster speeds -- as much as 10% the speed of light, or roughly 250 times faster than anything built to date. Should something like that be possible, it's conceivable that a mission to Proxima Centauri and its neighbors could take place within the lifetimes of a handful of the very youngest readers of this article today.

A spacecraft traveling at a tenth of the speed of light could reach the Alpha Centauri system in roughly 44 years, then beam back a transmission informing us of what it found -- signs of life, or evidence of artificial structures indicating that life once existed there -- in less than four and a half years. From start to finish, such a mission could take less than 50 years to complete.

Experts by and large agree that a probe sent to Alpha Centauri would probably be very small, and propelled by capturing the energy from ground-based lasers on larger "solar sails" that precede and pull the craft. But there are other options, ranging from advanced nuclear propulsion systems to the almost mythical EmDrive, which in apparent violation of Newton's Third Law of Motion has been observed moving small objects without burning any fuel at all.

Don't be a naysayer -- go ahead and dare to dream

And that's OK. For investors in the burgeoning field of space exploration, it's not necessary to identify companies actually building spacecraft to profit from them. Simply researching the technology (with funds Congress seems willing to provide), developing and testing prototypes, and working toward a build-able spacecraft could provide revenues and profit-dollars for decades to come.

In fact, if NASA is serious about mounting a mission to Alpha Centauri and its neighbors, and if Congress backs up its words with cash, then there's a reasonable prospect that companies beginning this work today could continue doing it, and profiting from it, for the next 51 years (when the mission would launch) ... and for another nearly 50 years after that as they help to manage the interstellar mission to Alpha Centauri ... and for years after that as they help to analyze the data and prepare follow-on missions.

How much money might we be talking about here? That's really anybody's guess. The answer would be as speculative as many of the technologies being talked about. But to give just one example, in 2015 NASA awarded Ad Astra Rocket Company (a company so speculative itself that I'll bet you've never heard of it) $9 million in funding to try to develop a 200 megawatt ion engine to power the spacecraft of tomorrow. That same year, Aerojet Rocketdyne (NYSE:AJRD) won an $18 million  contract to develop a similar "Evolutionary Xenon Thruster-Commercial" ion engine. That's $27 million in funding in a single year, and all to fund development of technologies that might never pan out.

Even if 51 years from now we don't end up launching a spaceship to Alpha Centauri, well, $27 million times 51 years of trying adds up to ... hundreds of millions of dollars worth of possibilities.