NASA is going to Mars, perhaps as early as 2033. It won't be a short trip, however, at least not with current technology.

According to a recent Boeing (NYSE:BA) presentation on NASA's plan for a manned mission to Mars, the best time to launch a spaceship from Earth to Mars is during "Mars Opposition," the time of year when Mars is closest to Earth, and directly opposite Earth in relation to the Sun. Such approaches come only once every 26 months, however. And even then, at the point of closest proximity between the planets, current engine technology relying on the burning of liquid fuel to propel a spaceship means a trip to the Red Planet will take at least six months -- one way.

But what if there were a better way to travel? 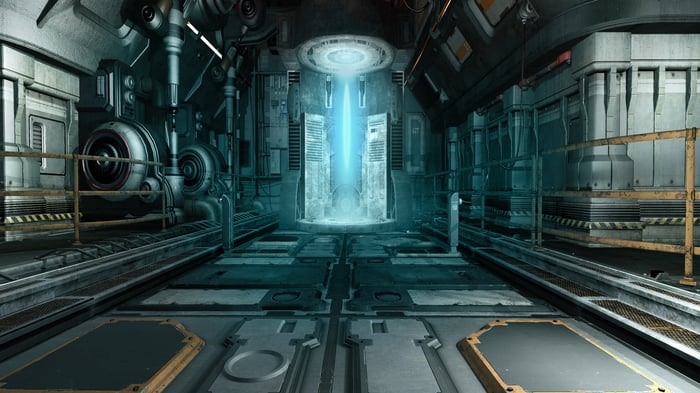 One technology NASA is evaluating to power such a Mars mission is called "EmDrive," short for Electromagnetic Drive. We first introduced you to EmDrive last year. Simply put, it's a device for converting electrical energy into microwaves, which in turn provide thrust to move a spaceship through space.

Initially, the thrust produced is minuscule -- about 1.2 millinewtons per kilowatt. (So one kilowatt produces enough thrust to accelerate one gram of mass one meter per second per second.) But as the thrust continues over time, speeds increase. Ultimately, it's believed that an EmDrive-powered spaceship might permit Earth-to-Mars travel in as little as 10 weeks.

And here's the most amazing part: Scientists still can't quite nail down how EmDrive jibes with Newton's Third Law of Motion, as it appears to create thrust without any need to expel propellant. Electricity alone (generated from an on-board nuclear reactor or solar panels, for example) appears able to propel the ship. Thus, there's no need to spend millions of dollars, and millions of gallons of fuel, lifting propellant out of a planet's gravity well to fuel and power a spaceship.

Too good to be true?

Propulsion without fuel? An "engine" that runs without "gas"? EmDrive sounds too good to be true, but try as it might, NASA hasn't been able to prove that the EmDrive is a hoax (yet).

Not that it hasn't tried. First proposed by Britain's Satellite Propulsion Research Ltd in 2001, and later tested in China, NASA's "Eagleworks" Advanced Propulsion Physics Laboratory began studying EmDrive in 2013. Last month, The Christian Science Monitor confirmed that an Eagleworks report on EmDrive "has survived peer review" and has been published in the American Institute of Aeronautics and Astronautics' Journal of Propulsion and Power.

The Monitor goes on to clarify that merely passing review does not conclusively prove that EmDrive works as described. It does, however, confirm that Eagleworks' methodology was "sound," and lends support to NASA's plan to next test EmDrive in space.

That's where things could get interesting for investors in the space arena. Currently, multiple companies are pouring billions of dollars into developing conventionally fueled engines to power spaceships on interplanetary flight -- everything from Aerojet Rocketdyne's (NYSE:AJRD) RL10 engine and its successors to the new interplanetary engines that Elon Musk is designing for his Mars Colonial Transport at SpaceX.

On one hand, if EmDrive survives testing in space, and continues to prove out the concept of fuel-less propulsion, this could render all those other investments in conventional engine technology obsolete. On the other hand, development of a working EmDrive propulsion system could open up new avenues for space tech companies to research. And by making space travel more efficient, and cheaper, it could further advance the creation of private companies seeking to develop space commercially.

In short, EmDrive may sound a lot like "Star Trek tech," and far-fetched to boot. But as long as EmDrive keeps passing every test NASA can throw at it, it remains a technology worth watching.