The company, which was spun off from parent Yum! Brands (NYSE:YUM) late in 2016, has enjoyed initial success with the Mexican food-inspired brand -- which is great news for investors.

In early 2017, Yum China relaunched the Taco Bell franchise in Shanghai, marking its grand reentry into the world's most populous country after closing down a handful of stores back in 2008. The lone store, opened near the Oriental Pearl Tower and close to a new Pizza Hut concept store with robot greeters, has been in testing mode for the last year.

One of the reasons for splitting Yum China off from Yum! Brands was to give the former more flexibility to tailor its approach to the local customer base. In keeping with that thinking, the new Taco Bell's menu caters to Chinese tastes, has alcohol on tap, and exudes an upscale feel.

After 12 months in operation, management is pleased enough with results that it feels it's time to expand. It was announced at the end of December that two more stores similar to the first will open in Shanghai in upscale university and shopping districts. 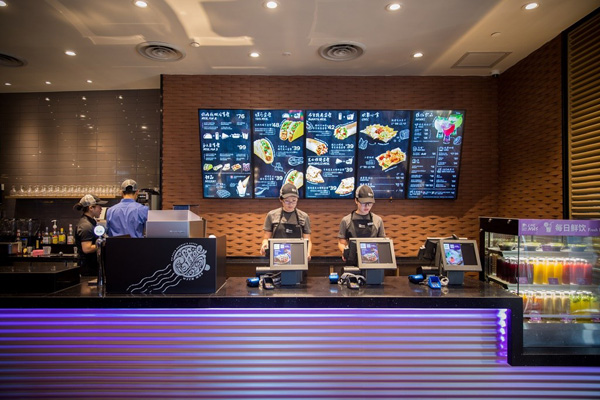 The inside of the first of three Taco Bells in Shanghai. Image source: Yum China.

Mexican food could be huge

Taco Bell has the possibility to be a big deal for Yum China. Whereas KFC and Pizza Hut have a broad global presence and appeal, Taco Bell is more of a U.S. phenomenon. There are about 7,000 Taco Bell stores worldwide, the vast majority of them in the U.S. Maybe that says something about Americans' taste in food, but Yum! Brands doesn't think so.

Yum! Brands believes it can get 1,000 international locations built by 2022, up from the less than 400 in existence outside of the States right now. Yum China could play a big role in helping the Taco Bell brand hit that target. The country is a big fan of American-style fast food -- KFC being the largest chain, and Pizza Hut the largest casual dining chain there. In total, there are over 7,700 locations.

By contrast, KFC, Pizza Hut, and Taco Bell have over 18,000 locations in total in the U.S. Yum China's management doesn't think there is any reason China should have fewer than that. And why not? China has more than four times the population. Besides continuing to grow its existing footprint in the fried chicken and pizza business, Taco Bell could help the company achieve that lofty long-term goal.

Three locations in a country of 1.3 billion people is insignificant, and as mentioned before, Taco Bell previously dipped its toes in China. Those attempts failed, so why take on the daunting task of cracking the Chinese market again?

This time around, the country is in a different place economically. There is a large and still fast-growing middle class, and with that newfound wealth has come the desire to have new experiences. Thus the new spin on the Taco Bell brand, complete with a custom menu and trendy feel.

Will fast-food burritos and tacos gain the ubiquitous popularity they enjoy here? That remains to be seen, and it will take some time. It looks like a worthy investment for Yum China, though, and the Chinese consumer might be up for the change of pace this time around.