Shares of MoneyGram International (NASDAQ:MGI) climbed as much as 12% early Thursday, while Eastman Kodak (NYSE:KODK) was down 23.8% and Cogint (NASDAQ:FLNT) had dropped 10.5% as of 1:00 p.m. EST on blockchain-related events. Blockchain is the digital-ledger technology underlying many crytpocurrencies.

Kodak and Cogint soared nearly 55% and 7%, respectively, on Wednesday -- though at one point, Cogint had climbed nearly 30% -- after both companies announced their own unique entrances into the blockchain industry. So it's not terribly surprising to see shares give back some of those gains. On the other hand, MoneyGram International is up thanks to a newly announced partnership with enterprise blockchain company Ripple. 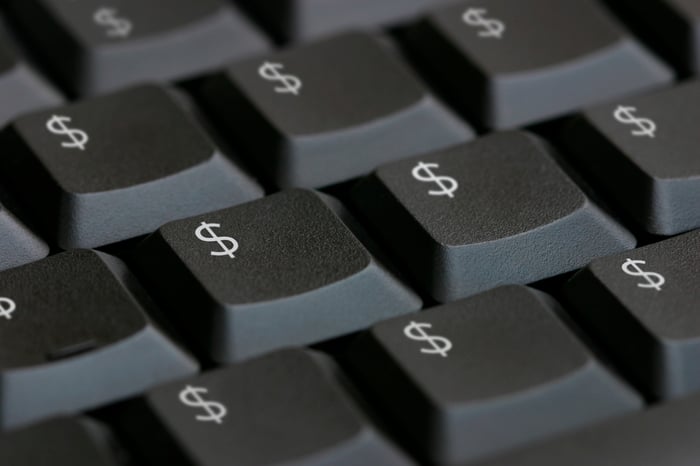 Essentially, nothing has changed with Kodak since yesterday, when it announced a partnership with blockchain developer WENN digital to launch a new image-rights management platform (dubbed KODAKOne) that will use blockchain technology. Kodak and WENN also introduced a new photo-centric cryptocurrency called KODAKCoin. Kodak hopes that the two new products will allow "photographers and agencies to take greater control in image rights management," namely by enabling them to both archive and register new images that can be licensed, tracked, and paid for on the secure platform.

"For many in the tech industry, 'blockchain' and 'cryptocurrency' are hot buzzwords," explained Kodak CEO Jeff Clarke, "but for photographers who've long struggled to assert control over their work and how it's used, these buzzwords are the keys to solving what felt like an unsolvable problem."

Kodak will hold an initial KODAKCoin offering to accredited investors at the end of this month.

A new player in blockchain analytics

Similarly, there have been no new negative developments for Cogint since it announced a new blockchain-solutions division on Wednesday, calling it "Red Violet Blockchain and Analytical Solutions." That said, the data-analytics platform provider appointed  LDJ Capital founder -- and blockchain and cryptocurrency expert -- David Drake as the chairman of the new division's strategic advisory board. However, that's not an unfavorable move that could explain today's drop.

"Red Violet's identity verification and Know Your Customer solutions, and analytical capabilities, have wide-ranging applications across the blockchain landscape and I look forward to driving Red Violet's expansion," Drake stated.

Validation for a promising new cryptocurrency

Finally, MoneyGram announced it will pilot the Ripple's XRP digital asset in its payment flows through Ripple's xRapid on-demand liquidity solution. Moneygram further noted that XRP is drastically more efficient than other cryptocurrencies "with transaction fees of fractions of a penny" compared to fees of $30 per transaction for Bitcoin. XRP's average transaction times are also significantly faster at two to three seconds compared to between 15 minutes to an hour for many other leading digital assets.

It's unclear the extent to which any of the above products, developments, and partnerships will contribute to the top and bottom lines of Kodak, Cogint, or MoneyGram in the near future. I think investors would do well to tread carefully here, or better yet -- as Kodak and Cogint investors learned today -- to avoid the dangerous practice of trying to trade around blockchain-centric news.