Shares of the clinical-stage gene-therapy company bluebird bio. (NASDAQ:BLUE) gained a stately 188.7% in 2017, according to data from S&P Global Market Intelligence. The market's glowing enthusiasm for the biotech was sparked by the unprecedented clinical trial results for its chimeric antigen receptor T-cell (CAR-T) candidate bb2121 in patients with relapsed/refractory multiple myeloma. The cell-based therapy is being co-developed with Celgene Corp. (NASDAQ:CELG). 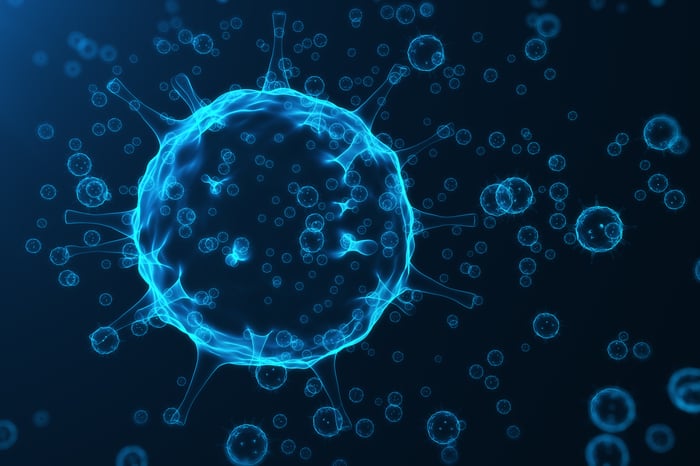 At the American Society of Hematology Annual Meeting last December, bluebird and Celgene provided an extremely encouraging clinical update on bb2121's ongoing dose-escalation study. The two companies reported that 17 out of 18 patients exhibited an objective response when treated with bb2121, far outpacing the response rates for other FDA-approved treatments for advanced multiple myeloma. In other words, bluebird and Celgene appear to have a big winner on their hands with this experimental cell-based cancer therapy.

At this year's J.P. Morgan Healthcare Conference, bluebird bio.'s management said they are hoping to have bb2121 under regulatory review in both the United States and Europe by 2019. Meanwhile, the company is planning on filing for approval for its transfusion-dependent beta thalassemia candidate LentiGlobin in Europe later this year. And last but not least, bluebird is aiming to have its cerebral adrenoleukodystrophy candidate Lenti-D under review by 2019, as well.

So, this developmental-stage biotech definitely has a number of major catalysts on the calendar to keep investors' interest moving forward. And with over a billion in cash and investments in its coffers, bluebird certainly has the financial resources necessary to make good on this aggressive regulatory timeline. As such, investors shouldn't be surprised if bluebird continues to outperform the broader markets in 2018.