Friday showed investors what the stock market might do throughout the coming earnings season, as the initial releases of results from key banking institutions were extremely favorable. The Dow climbed more than 200 points, and the S&P 500 and Nasdaq Composite also rose to new highs on hopes that other sectors of the economy will fare as well as financials did. In addition, some companies reported good news that drew investor interest and spurred outsized gains for their shares. Lowe's (NYSE:LOW), Sears Holdings (NASDAQ:SHLDQ), and Travelport Worldwide (NYSE:TVPT) were among the best performers on the day. Below, we'll look more closely at these stocks to tell you why they did so well.

Shares of Lowe's gained 5% after reports surfaced that D.E. Shaw might be building up a substantial share position in the stock of the home improvement retail giant. Bloomberg reported that Shaw intends to play an activist role in pushing Lowe's toward adopting more shareholder-friendly initiatives. Given that the company has long trailed its primary rival among home improvement retailers, it's not surprising to find interest in helping Lowe's do better. Yet a solid 2017 reflected the strength of the overall industry, and that could make current shareholders less open to dramatic changes from an activist. 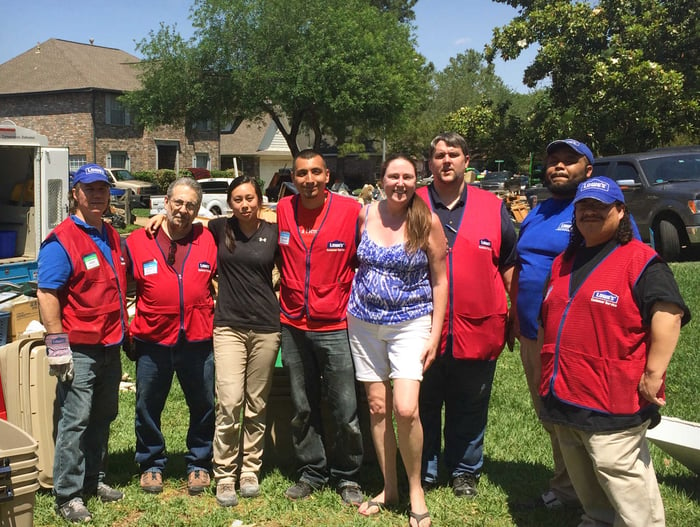 Sears Holdings stock was higher by more than 8% as investors continued to parse the news that the retail giant has dealt with during the past week. Despite signs of recovery among its department store peers, Sears suffered a tough holiday period, with comparable sales plunging between 16% and 17% during November and December. Yet some believe that failures of rivals in key niches could free up competitive room for Sears, and financial moves to buy time have also inspired bullish investors to hold out hope for a better future for the long-struggling department store stalwart.

Finally, shares of Travelport Worldwide gained 6.5%. The travel commerce platform provider found out yesterday that its stock will join the S&P SmallCap 600 Index immediately prior to the open of trading next Wednesday, Jan. 17. The move comes as Post Holdings purchases current S&P SmallCap 600 member Bob Evans Farms, leaving an empty spot for Travelport to fill. The company has had to deal with tough conditions in the travel industry, but as Travelport moves more aggressively toward the high-value online segment, bullish investors believe that faster growth could spur an earnings recovery that could last well into the future.