Please ensure Javascript is enabled for purposes of website accessibility
Log In Help Join The Motley Fool
Free Article Join Over 1 Million Premium Members And Get More In-Depth Stock Guidance and Research
By Nicholas Rossolillo - Jan 13, 2018 at 10:36AM

CES always promises exciting new ideas, and this year’s event was no different.

Tech enthusiasts flocked to Las Vegas and CES 2018 this week to get a look at the best and most forward-thinking ideas consumer electronic companies had to offer. Highlights included home assistants, autonomous vehicles, and  devices in the always crowded smartphone and tablet field.

A bad joke on the photography business?

While debate about a potential bitcoin bubble simmers, photography technology company Eastman Kodak (KODK -1.81%) said it was going to launch and begin mining its own cryptocurrency called KODAKCoin. The company said it wants to use the currency to help photographers control rights to their images.

In tandem with the launch of KODAKCoin, the company said it will set up miners of its newly minted digital currency at headquarters in New York. Shares of the beat-up camera company went bananas in response. If this isn't a sign that cryptocurrency is a bubble, I don't know what is. But I digress.

The smart-home assistant battle between Amazon's (AMZN 0.25%) Alexa and Alphabet's (GOOG -1.29%)(GOOGL -1.34%) Google Assistant has been heating up, and CES 2018 was proof of that. Everything from voice-activated TVs to appliances that can communicate with each other were on display, trumpeting integration with Alexa, Google Assistant, or both.

Google is playing catchup to Amazon, which was the first to offer a version of its Alexa device with a screen. Google made up ground in a big way, though, showing off Google Assistant devices with a screen made by the LG, Lenovo, and others. While Amazon still wins in the pricing department, Google Assistant has access to Google's more expansive lineup of proprietary and third-party apps.

NVIDIA (NVDA -2.51%) has been working on new applications for its chipsets. One of them is self-driving vehicles, and the company unveiled its newest chip for that purpose at CES last year, dubbed Xavier. This year, the company detailed functional safety architecture for its DRIVE artificial intelligence supercomputer platform for self-driving vehicles.

The company calls the system "holistic," covering everything an automaker or start-up needs to build a safe vehicle. Safety methodology, processors and sensors, software and safety algorithms, and virtual reality simulation to test the vehicle are all included. Thanks to Nvidia, the world looks like it's almost ready for its first fully self-driving car.

A small room on wheels?

Speaking of autonomous vehicles, Toyota Motor Company (TM 1.78%) made waves of it own. The company has been working on new mobility ideas of the future, and this latest one goes beyond passengers relaxing while commuting. Toyota wants to mobilize everything via its e-Palette all-electric self-driving machine. 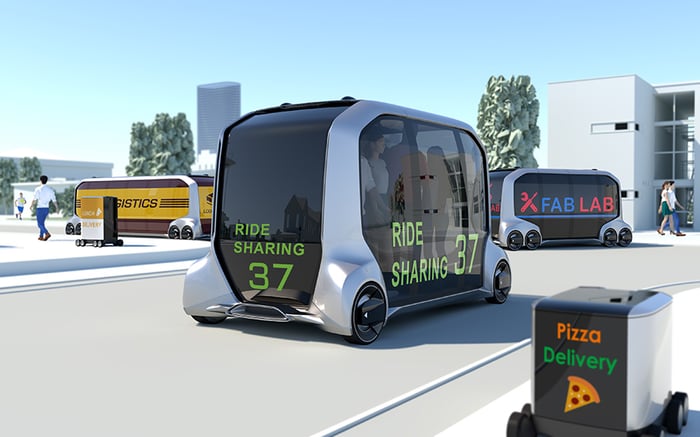 The concept looks like a box on wheels, and would be able to transport everything from people to mail to mobile retail stores. Also included was an announcement of the e-Palette Alliance, an ecosystem of hardware and software development and support to accelerate the e-Palette project. Partners in the alliance at launch include Amazon, DiDi Chuxing, Uber, Mazda, and Pizza Hut.

Huawei's uphill battle in the U.S.

Upstart Chinese electronic company Huawei didn't have a good time at CES this year. AT&T (T 0.94%) was supposed to be the first U.S. mobile carrier to sell its smartphones, and the new flagship Mate 10 was being shown off ahead of the start of that U.S. release. AT&T pulled the rug from under Huawei at the last minute, though, with some speculating it was because of political pressure.

During his CES presentation showing off the Mate 10, Huawei's CEO of consumer electronics, Richard Yu, expressed his frustration about difficulties breaking into the U.S. market, which is tightly controlled by the big mobile providers . Unfortunately for Huawei, it's not just about U.S. carrier's stranglehold on the phone market. The smartphone industry is crowded, and CES was the stage for several other competitors' phones as well, like Sony's (SONY 1.39%) Xperia XA2.

Huawei will go on to sell the Mate 10 online without the ringing endorsement of a major carrier, but the company's challenges were echoed throughout the week at CES. Other tech sub-industries have gotten crowded with competition as well, like wearable devices, tablets and laptops, and TVs all vying for attention. Even self-driving automobiles have myriad options being developed.

The good news? For consumers, competition means lots of choices and good pricing, and it also means progress on the most promising and exciting technologies being worked on. That is good news for investors, too, as this year's event proves there is plenty of work to be done to perfect the best ideas and prep them for the mass market.