It's the end of an era for Domino's Pizza (NYSE:DPZ).

Patrick Doyle, the CEO who led the pizza-delivery chain on an unbelievable comeback during his eight-year tenure, said he would step down from his post in June, to be replaced by Richard Allison, the current president of Domino's International.

Not surprisingly, Doyle's name was being tossed around as Chipotle Mexican Grill's (NYSE:CMG) next potential chief even before he said he would step down from Domino's. However, the rumors seem to be just that, as Doyle dismissed the idea of becoming top burrito at Chipotle and said he would take some time after leaving Domino's to take a breath and plan his next move.

Even if Chipotle can't land the turnaround specialist, it would be mindful to take lessons from some of Doyle's best moves as he repaired Domino's brand and sent sales soaring. 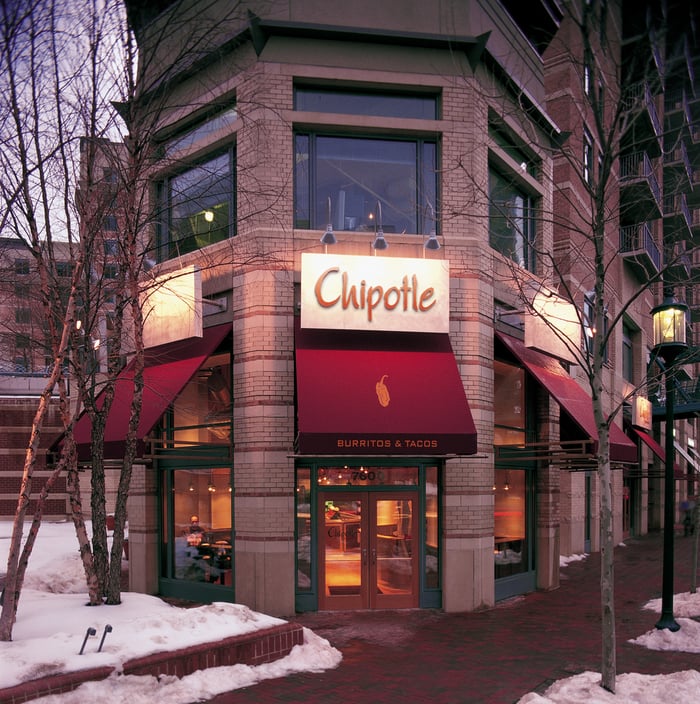 In 2010, when Doyle came on as CEO, he did something remarkable. He went on TV and admitted the company's pizza was terrible, acknowledging customer remarks saying the crust tasted like cardboard and the sauce was like ketchup. Then he pledged to make it better, rolling out new recipes for dough, sauce, and cheese that improved the pizza quality and resonated with customers.

Going on TV like that, admitting the company had an awful product and speaking directly to the consumer, was a big risk for Doyle and the company, but it paid off.

That sort of do-or-die moment recalls Chipotle's own botched efforts to recover from the E. coli crisis in late 2015 and rehabilitate the brand afterward. If CEO Steve Ells had gone on a TV ad like Doyle did, apologized directly to the consumer and asked them to return to the burrito chain so he could regain their trust, sales might have recovered. Instead, they remain down about 20% from pre-outbreak levels.

While Ells and Chipotle did apologize in newspaper ads and on the Today show, there's nothing like broader TV ads for communicating directly to a mass audience. Additionally, Chipotle's efforts clearly weren't enough and were diluted by management's own blaming of the media and Centers for Disease Control for the backlash, its own occasional snark and flippant attitude, and a marketing campaign that focused on its "Food with Integrity" at a time when patrons were still afraid of getting sick from eating at its restaurants.

Even today, some of Chipotle's customers don't seem to know what happened to the lemon slices that used to be by the drink station, which were moved behind the counter as part of its new food safety protocol.

When did Chipotle stop putting lemons out.. Jesus

This is simply bad communication between a company and its customers. Doyle is the type of CEO who knows how to fix that. Even today, Chipotle could probably benefit from a marketing campaign similar to what Domino's did in 2010.

After he improved the pizza recipe and told customers about it, Doyle's next winning move was tapping technology to make delivery better. Domino's rolled out tools to allow customers to order through its app, Twitter, or even with a simple pizza emoji. Domino's also introduced a pizza tracker to allow customers to see what stage of the delivery process their order was in, which was a hit with customers.

Meanwhile, Chipotle has been much slower to use technology to speed up the ordering process. During high-traffic peak hours before the E. coli crisis, the company would obsess about "throughput" or the number of customers it could serve in an hour, but allowing remote ordering through apps would have been a surefire way to improve that. It wasn't until last year that Chipotle really began focusing on digital ordering and improving the speed and accuracy of the process, but it may have missed an opportunity as it has lost customers who have gotten fed up with waiting in line and can't afford to waste 10 to 15 minutes on their lunch break. With Chipotle having a higher-end clientele than most fast food chains, focusing on digital ordering, like Starbucks did, should have been a no-brainer.

Focus on the food

While Chipotle's food quality and taste generally get rave reviews, its most recent creations have missed the mark. It pulled chorizo, the first meat it had added since its inception, after just a year on the menu, and the backlash against its highly anticipated queso has been well-publicized. Increasingly, it seems like the company's recipes are governed more by its own "Food with Integrity" mantra rather than customer taste. Chipotle may want to borrow from its Tasty Made burger chain, where it replaced organic meat with conventional after customers found the former too expensive. For many customers, price or taste are more important than sourcing.

Doyle seems to understand this intuitively, that taste comes above all else in the food business. During Doyle's tenure, the company successfully introduced a number of chicken items, which boosted sales in addition to the pizza revamp, and today 70% of Domino's menu items have been introduced since 2008. Chipotle's latest menu items like queso, and any new ones, could use some similar tinkering.

It doesn't look like Doyle will come on to be the burrito chain's next CEO, but Chipotle's board should consider someone in his mold. Knowing how to communicate with customers, making food taste better, and harnessing the power of technology will all be key qualities that the next head must possess in order to turn the company around. The clock is ticking.