Intel (NASDAQ:INTC) has come a long way in the last five years. At one point, it looked as if Chipzilla would fade into oblivion as the decline in the PC market hit alarming levels. In fact, the company was forced to lay off 12,000 employees a couple of years ago as its top- and bottom-line growth had stagnated. Moreover, Intel's failure to cut its teeth in the smartphone space further dented investor confidence.

But Intel started focusing on fast-growing technology trends such as data centers, the Internet of Things (IoT), memory, and automotive. This strategy has reaped rich dividends for the chipmaker, with its non-PC revenue growing 15% year over year during the last-reported quarter. The company's client computing group contributed 55% of revenue in the most recent quarter.

Not surprisingly, Intel's transition was rewarded by a decent run on the stock market last year -- up 27% -- and it could scale new highs over the next half-decade provided its execution remains strong.

Intel could become an automotive leader

The next five years are going to be very exciting for the autonomous car space. NVIDIA, one of the pioneers in self-driving car technology, believes that fully autonomous vehicles will hit the roads by 2022 and in the meantime many companies are working on putting various pieces of the puzzle on the roads. 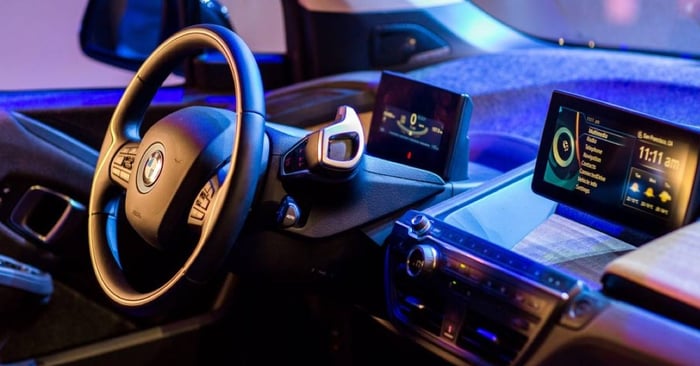 Luxury carmaker Audi plans to introduce a self-driving car by 2020, while its parent, Volkswagen, believes that sales of self-driving cars could begin as early as next year. So, the early iterations of autonomous driving technology could start gaining critical mass in the next few years, and Intel is in a prime position to take advantage.

Chipzilla has built a formidable group to attack the self-driving opportunity. First, Intel acquired Mobileye, which gave it ready access to 25 automakers and 27 component supplier partners. Next, it expanded its autonomous driving ecosystem by bringing in automakers such as BMW and Fiat Chrysler, as well as automotive parts technology company Delphi.

Then, it was revealed that Intel is supplying its chips to self-driving technology leader Waymo, which is the first company to deploy a fully autonomous vehicle on public roads without a human driver taking the wheel. The Alphabet subsidiary's self-driving cars have traveled more than 4 million miles on public roads, and it is potentially planning to enter the lucrative ride-hailing service.

Waymo is already offering a driverless ride-hailing service in Phoenix, setting it on its way to tap a market that could be worth $285 billion in 2030. Additionally, Intel's Mobileye business unit plans to launch an off-the-shelf autonomous driving system along with Delphi in 2019.

This self-driving system will have "Level 4" autonomous capabilities, just one notch below the fully autonomous level. So, Intel is set to make deep inroads into the automotive industry in the next few years thanks to its partnerships.

Intel was late to the artificial intelligence (AI) game. The more powerful graphics cards from NVIDIA and AMD were more suited for powering AI applications as compared to Intel's CPUs. As a result, its rivals have been scoring deals with cloud service providers to power AI-enabled data centers. But it is too early to discount Intel's prospects in this space.

Chipzilla recently announced that it has built neural network processing chips from the ground up to accelerate the training time of AI models. Intel has grand plans for these chips as it aims to accelerate the performance of neural networks by 100 times by 2020, so all is not lost for the chipmaker just yet as demand for AI chips is yet to hit critical mass.

Allied Market Research forecasts that the AI chip market could grow at almost 50% a year through 2023, hitting a size of $11.1 billion. More importantly, the report points out that demand for field-programmable gate arrays (FPGAs) will grow at a faster pace when compared to GPUs. This is great news for Intel as it is aggressively targeting the FPGA space.

The customizable nature of these FPGA chips makes them better than GPUs when it comes to performing multiple tasks. Intel is planning to integrate these FPGA chips with its server CPUs to enhance the performance of data centers so that they can run parallel workloads to execute AI applications.

However, the chip giant will need to overcome competition from Xilinx, which currently dominates this market thanks to a technology lead over Intel. But Intel enjoys an inherent advantage in this space as it has a monopoly-like position in the server chip market. This hybrid CPU-FPGA chip also gives Intel an advantage over the likes of AMD, which launched the EPYC server chip last year to attack the data center opportunity.

So, Intel's focus on making its server chips more versatile with the help of FPGAs should strengthen its position in the fast-growing server market, which is increasingly adopting more powerful and intelligent chips to power AI applications.

More importantly, Intel's transition is already having a positive impact on its bottom line. The company's net income increased more than 52% during the first nine months of 2017. So, as the opportunities that Intel's pursuing gain critical mass in the next five years, it could end up being a great pick for growth-oriented investors.