Apple (NASDAQ:AAPL) has enough money to scoop up companies like a kid in a candy store.

The tech giant had about $285 billion in cash to play with as of the end of 2017, according to estimates from Moody's Investor Service. That's slightly more than the $268.9 billion cash pile Apple reported for the quarter ended Sept. 30.

More importantly, it represents about a 16% increase over its 2016 year-end cash hoard of $246 billion.

Tech companies as a whole are doing well on this front, according to the Moody's report. The top five non-financial cash holders in the U.S. are all technology companies, including Apple, Microsoft, Google parent Alphabet, Cisco, and Oracle.

But Apple definitely wins the cash flow race, accounting for nearly 15% of all cash in the non-financial corporate sector.

In the past, Apple has struggled with investing back in the U.S. because the vast majority of its cash is held overseas. With the passage of tax reform, Apple can now bring cash back to the U.S. with just a one-time 15.5% tax versus the previous 35% tax rate. That's $52 billion in cash savings.

"You want people to use this money in the United States to invest more," Apple CEO Tim Cook said in an interview on CNBC in May.

So what could Apple, a company that seemingly has everything, do with its pocket money? Let's take a look. 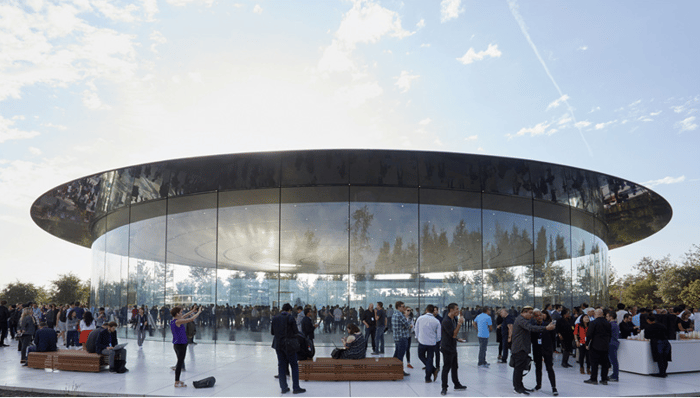 Apple recently spent a hunk of change on its new campus, including its new Steve Jobs Theater pictured above. Image source: Apple.

One major acquisition -- or the same old smaller deals

Some people have been begging Apple to step out of its comfort zone and make a half-exciting purchase that will help it expand its revenue streams outside of the iPhone.

Apple's biggest acquisition to date was its $3 billion purchase in 2014 of headphone maker Beats Electronics and music streaming service Beats Music. Most recently, Apple scooped up music-discovery app Shazam for a reported $400 million to help it compete with top music subscription company Spotify.

Now, with Apple making a tentative step into original content last year, some analysts are wondering if the company might take a leap and buy Netflix (NASDAQ:NFLX) to help it compete in the media space. This would make Apple the industry leader overnight. The deal would be a welcomed shortcut for Apple considering Netflix is a well-known brand that already holds content rights for a number of beloved shows and movies.

Apple could roll Netflix's $9.99 per month video services into a package deal with its $9.99 per month Apple Music services for $20 per month. Then users could have their music and video content in one spot and sync it across all of their devices.

However, there are some obvious hurdles here. First, Apple would need to find a way to keep Netflix open to non-iOS users so Netflix wouldn't lose customers. Second, Netflix's market cap is currently $92 billion and it's trading at a P/E ratio of 213.99 for the trailing 12 months. In other words, Apple would need to pay a premium to Netflix's current price.

There are definitely issues that make me think the two companies are better off staying separate and concentrating on their strengths. But it would also be nice for Netflix to have more money to put into additional content. In 2018, Netflix expects to spend $7 billion to $8 billion on content, Netflix CFO David Wells said on the latest earnings call.

Maybe it won't be Netflix, but the point is that Apple will have a good bit of cash to play around with that it didn't previously have. This gives it more freedom with acquisitions, so while Apple has typically stuck to smaller acquisitions, 2018 might be the year it departs from that strategy.

In fact, a GBH research note seen by the website 9to5mac says Apple will probably bring $200 billion of its overseas cash back to the U.S. to be used partly for "larger M&A." The firm hinted that Netflix is probably out of the question as it expects the deals to still stay under $2 billion, but also noted that it's time Apple made an "aggressive" buy in the media sector.

I tend to agree with Munster because Apple doesn't like to rock the boat too much. That's not how it does things. As much as possible, Apple still likes to build its own products and keep to itself. In addition, Apple's stock is doing very well on its own with a price increase of 48% in the past year. 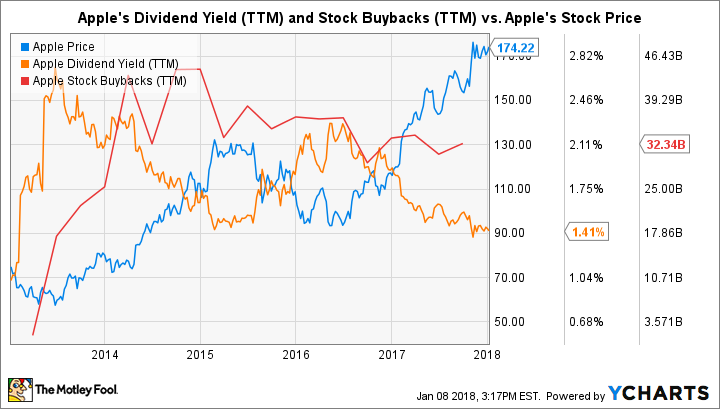 Apple has sponsored a generous capital return program since 2012, and I expect it to continue. Since 2014, Apple has returned a stunning $234 billion to shareholders through dividends and repurchases.

Of that chunk of change, about $61 billion was dedicated to dividends, while a much larger $166 billion went to buybacks. "We have now completed almost $234 billion of our $300 billion capital return program, including $166 billion in share repurchases," Apple CFO Luca Maestri said in the company's latest earnings call.

Munster also expects Apple to increase its dividend and buyback program. He expects Apple to buy back $69 billion worth of stock over the next three to four years and to increase its annual dividend by 15%, which is on top of the two 10% increases announced in April of 2017 and 2016. Because Apple will continue to generate cash over this period, Munster doesn't expect a big change in the company's 2022 cash ending balance from today.

So while it's exciting to imagine an Apple and Netflix combo, I think the reality is a bit mundane. I think Apple will continue to make smaller technology acquisitions, perhaps throwing in a midsize deal somewhere in there, while also increasing its buybacks and dividend. But I can't blame Apple. It's been a steady growth stock for so long partly because it has stuck with what works best for it.