Few stocks have provided long-term gains to match those of Starbucks (NASDAQ:SBUX). Since going public in 1992, shareholders have enjoyed returns of 20,150% including dividends. Howard Schultz -- current board chair and the man behind the company's rise -- created one of the greatest brands the coffee world has ever known.

But as the old saw goes, "Past performance is not an indicator of future results." As a former longtime shareholder of Starbucks, I want to share with you why I think the stock's best days are likely behind it. I sold all of my shares last year and have given the stock an underperform rating on my own CAPS profile. 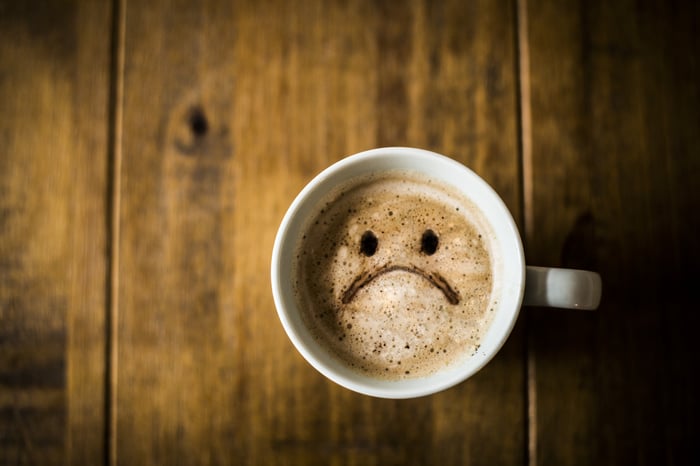 My reasoning starts with Starbucks' moat. In the simplest sense, a moat is a sustainable competitive advantage. It is the simple something that keeps customers coming back for more year after year, while holding the competition at bay for decades. As a long-term investor, there's nothing more important to investigate than moats.

There are four very broad moats a company can have: network effects, high switching costs, low-cost production, and intangible assets like brands or patents. You can read about them in more detail here.

The food and beverage industry has brutally narrow moats. Just about anyone can open up a store that offers coffee. That leaves a company's brand as the foremost moat-provider, and this is an area where Starbucks excels: its brand is second-to-none. According to Forbes, the brand is the 35th most valuable in the country, worth $15 billion and second only to McDonald's in the restaurant category.

Because of this strength, Starbucks has also begun to build a secondary moat in the form of high switching costs. The Starbucks Rewards program -- especially when used in tandem with the mobile ordering option -- has become very popular; management recently stated that, "36% of tender comes from Starbucks Rewards, the vast majority, via our mobile app."

If you've got Starbucks rewards that are stored on your account and can't be used elsewhere, that's a powerful motivator for you to return to Starbucks.

Given the strength of Starbucks' brand, the growing importance of Starbucks Rewards, and the ubiquity of a company with 27,339 locations worldwide, you'd think it would be an obvious buy for investors.

But I don't think that's the case.

In my time as an investor, I've found that except in rare cases, relying on brand strength as the moat-provider can get dangerous when three things happen:

Let's break all three of these concepts down, starting with "multiple futures." As I described in a previous article, "Companies that have multiple ways of fulfilling their missions -- and that use trial and error to find those paths -- will reap huge benefits over the long run."

Starbucks has made many attempts to expand its offerings beyond caffeinated drinks. The company spent $100 million to buy La Boulange bakery without notably improving the  chain's food. The acquisition of Teavana is starting to look like a case of di-worse-ification as well. While working on upscale roasteries might provide a new "future", I'm not holding my breath that it will move the needle.

Next, let's move on to slowing sales. In the restaurant business, there's no metric more important for investors to watch than comparable-store sales (comps). If they're growing, it's a sign that a company is becoming more popular with locals over time. Here's how Starbucks' comps have fared over the past five years in the company's two main geographies -- the Americas and China/Asia-Pacific -- as well as consolidated results. 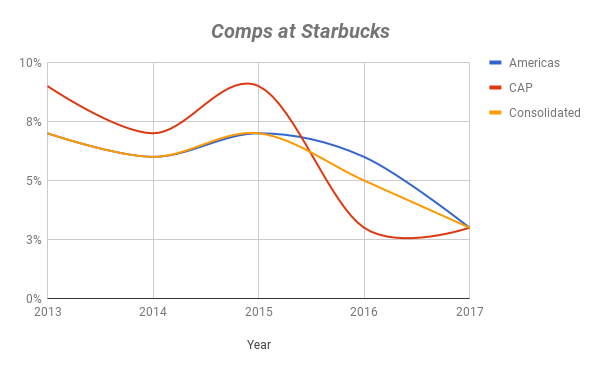 Of course, results like this are bound to happen with any company reaching the saturation level of its market. There's nothing inherently wrong with that. The problem, however, rears its ugly head when we look at the third factor from above: valuation.

Here are just a few of the metrics showing what kind of expectations are baked into Starbucks' stock price:

From a historical perspective, all three of these figures point toward a stock being "expensive." After our eight-plus year bull run, however, this is closer to par for the course. If and when a market correction comes, however, I believe stocks like Starbucks that rely primarily on brand, have limited multiple futures, and are seeing growth slow will be the ones to suffer the most.

While I'm not one to short stocks, these factors contributed to my decision to sell all of my shares of Starbucks last year. I could definitely be proven wrong, especially if sales pick up once again in China and the Asia Pacific region. But I think there's more risk than reward at these prices, and that's why I recently gave the company an "Under-perform" rating on my publicly viewable CAPS profile.

There are, I believe, better places for your money.