Shares of oil and gas royalty trust BP Prudhoe Bay Royalty Trust (NYSE:BPT) are down 11% as of 11:30 a.m. EDT today. The apparent reason for the sell-off is that investors are cashing out after receiving their most recent dividend payment.

It isn't uncommon to see shares of a high-yield stock drop after a dividend is paid. Investors who intend to unload shares wait until that last dividend paycheck and then move on to something else. 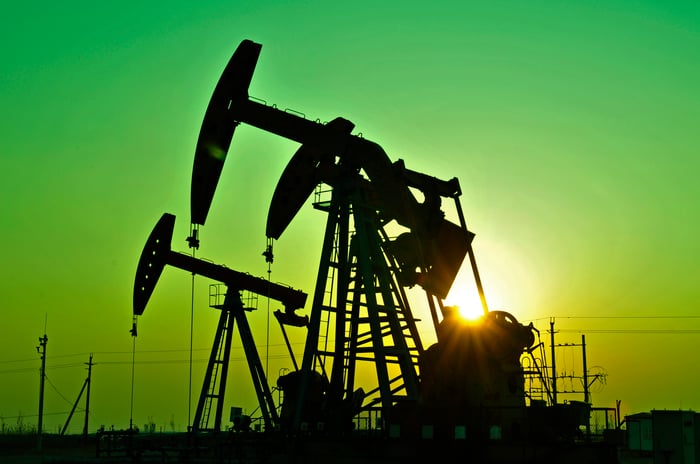 It seems a bit odd, though, that investors would be so quick to flock from a stock that, in theory, should benefit immensely from higher prices. As a royalty trust, BP Prudhoe Bay is entitled to a certain amount of production from BP's (NYSE:BP) Prudhoe Bay operations in Alaska. Its revenue is based on the spot price of West Texas Intermediate (WTI) crude oil -- the domestic benchmark price for the U.S. -- minus a production cost concession to BP and the total production from the field. Over the past six months, the price of WTI has been on an absolute tear. Even if its concession costs were to increase slightly, royalties from the trust should increase over the next few quarters.

The problem is on the production side of the equation. The Prudhoe Bay field has been prolific for quite some time, and now production rates are on the decline. The trust is entitled to a percentage of the first 90,000 barrels per day of production on the acreage it owns, but production has been below that 90,000-barrel-per-day threshold for some time. It also doesn't help that BP has scaled back its drilling program in the region from five rigs to two a couple years ago. This trend suggests that the trust isn't going to last much longer.

Of course, the big "if" in this equation involves oil prices. If all of a sudden we see high oil prices again -- like $100 a barrel -- then BP might elect to increase drilling or implement some enhanced oil recovery techniques to eke out more production. In that case, the trust could still have some life left in it yet. If not, then higher oil prices might not be enough to offset the declines in production it will inevitably face.

Today's dividend yield of 16% looks incredibly tempting, but keep in mind that payment was based on current oil prices and current production. There is no guarantee it will be able to replicate those results in the future.