2017 wasn't a bad year for Nike, Inc. (NYSE:NKE) on the stock market, where it beat the S&P 500's performance 23% to 19%. But not all was well with Nike operationally. The company has seen net income decline, and there doesn't seem to be an easy way to stop the bleeding.

If Nike doesn't turn around operationally in 2018, it could start looking like a very expensive stock for investors.

Margins are beginning to be a concern

In the first half of fiscal 2018, Nike saw revenue rise a tepid 2% as competition in sporting goods got stronger. What's more concerning is that cost of sales rose 5% over the same time, leading to a gross profit margin decline of 160 basis points. Management blamed foreign currency exchange rates for most of the decline, something that will swing up and down from quarter to quarter, but higher costs were a factor as well.

While falling gross margins wouldn't be concerning by themselves, when you combine them with a large increase in operating expenses, a different story unfolds for Nike.

Are expenses out of control?

Total selling and administrative expenses jumped 4% in the first six months of the fiscal year. That represented 31.9% of sales, up 0.6 percentage points. In the most recent quarter, demand creation expense was up 15%, and operating overhead expenses rose 8%. Higher marketing costs and investment in Nike Direct were the drivers of higher costs. The problem is, the trend appears to be getting worse. 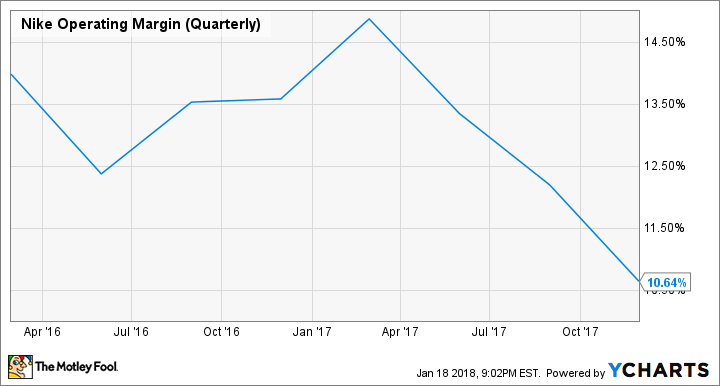 The reason I'm concerned about falling operating margins is that Nike should be increasing margins as it sells more products directly to customers. Nike is trying to cut out the middleman, or in this case, retailers, which should lead to a higher sale price per item and higher margins overall. But the opposite has been the case.

Higher costs are even more exaggerated on the bottom line, where net income has fallen 18% in the first six months of the fiscal year to $1.72 billion. If the trend continues, the stock will look very expensive.

Nike may be an expensive stock in 2018

I think Nike is one of the best brands in the world, and it's managing the transition to direct sales well. But the cost has come in the form of lower margins and a less profitable business, a trend that could continue.

If declining earnings are indeed a trend, the stock looks awfully expensive at 28 times earnings. That's what will keep me from making an outperform call on My CAPS page today.