The race to make fully autonomous vehicles is on. Technology companies like Alphabet (NASDAQ:GOOG)(NASDAQ:GOOGL), Nvidia (NASDAQ:NVDA), and Intel (NASDAQ:INTC); ride-sharing services like Uber and Lyft; and seemingly every auto manufacturer are putting in serious work to get a self-driving car on the road. While all eyes in the U.S. are on promising projects -- like the Chevy Bolt that doesn't have a steering wheel, announced by General Motors (NYSE:GM) last week -- the best-selling autonomous vehicle of the future may not be what you think.

The best-seller isn't a car at all

It's the motorcycle -- probably not the first mode of transport you think of when imagining AI-powered driving technology. For most Americans, it's not a method of transport at all. That didn't stop Honda (NYSE:HMC) from unveiling self-leveling rider-assist technology for its motorcycles at the Consumer Electronics Show (CES) 2017 in Las Vegas. BMW (OTC:BAMXF) has revealed similar rider-assist technology for its bikes.

At CES 2018 last week, Yamaha (OTC:YAMHF) had a few tricks of its own: a motorcycle that was driverless could be summoned with a gesture of the hand, had self-leveling technology, and used electric power. The company talked about its ambitions to meld riders with their bikes via technology to make them safer.

What is the need for driver-assist and self-driving bike tech? Motorcycles and motorbikes outsell cars globally -- over 130 million two-wheelers are expected to be sold worldwide in 2018, compared to about 95 million cars, SUVs, and trucks. And that fact is significant.

The need in the world's most crowded cities

Most of the world's population lives in emerging markets, with the scales tipped overwhelmingly toward Asia, and motorbikes are the best-selling and primary means of transport there. The cities in some of these developing countries like China, India, and Southeast Asia are bursting at the seams with tens of millions of people. 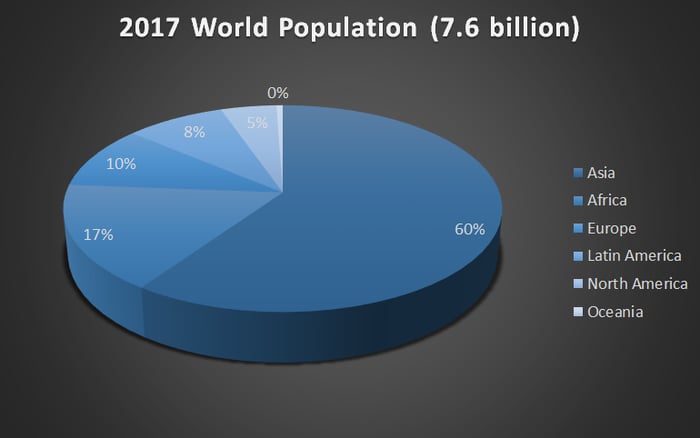 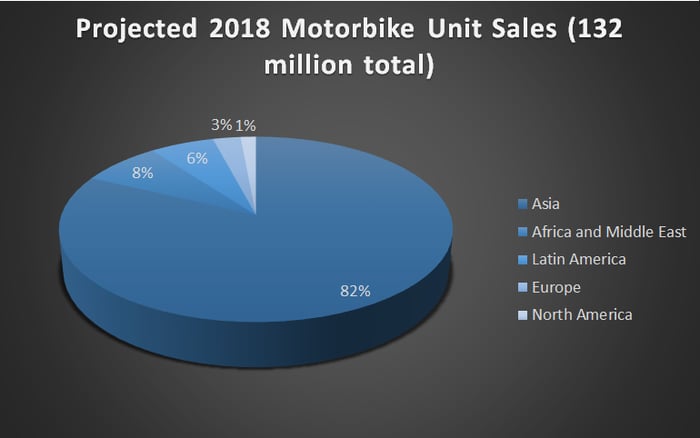 Motorbikes are popular in developing countries because they're inexpensive to buy and maintain, and they're small enough to maneuver through crippling traffic in packed cities. As people in the developing world acquire more money, a means of transport is one of the first things they acquire. And a motorbike is usually the ticket. 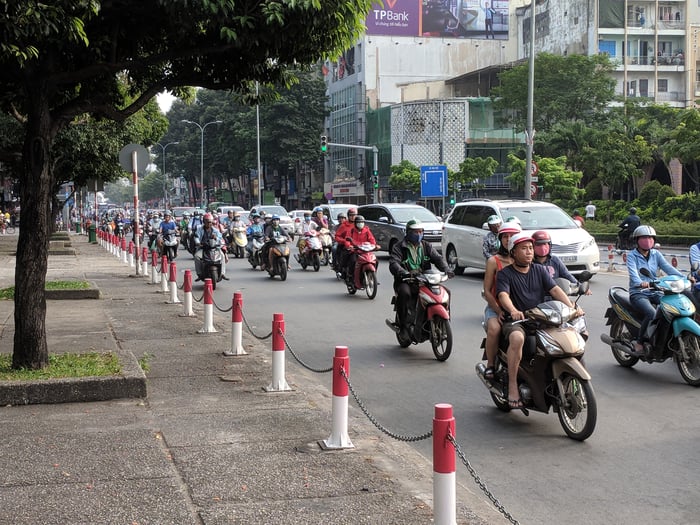 A typical scene in Southeast Asia, this one on a street in Ho Chi Minh City, Vietnam. Image source: author.

That can come at another cost, though. Across the world, two-wheelers are more dangerous to operate than a car. There isn't anything separating the rider from the road, there are fewer safety mechanisms on a bike, and dangers from other drivers are elevated because a bike can be more difficult to spot. That fact shows up in the numbers.

For example, in Vietnam -- the world leader in motorbike use with 80% of the population utilizing a motorized two-wheeled vehicle -- there are over 14,000 reported fatalities from traffic accidents every year, by far the leading cause of death in that developing country.

Despite the dangers, motorbikes are likely to remain the most popular means of transportation as they are the only practical option. That's why the self-driving and rider-assist technology that Honda, BMW, and Yamaha are working on is important. While self-driving or rider-assisted bikes may sound like impractical sci-fi toys to some, in the most crowded areas of the globe they could be a real game-changer in keeping roads safe.

That's why I think the best-selling autonomous vehicle of the future isn't a car at all. The world's most crowded countries use two-wheeled vehicles, and as they continue to develop, the number of motorbikes on the road is only increasing.

I'm not saying you should buy shares of the leading motorcycle manufacturers. Focus, instead, on the tech companies leading the charge in developing the equipment and software to enable self-driving vehicles: Alphabet, Nvidia, and Intel, or China's tech giant Baidu (NASDAQ:BIDU).

While the focus is currently on getting a mass-produced self-driver on the market in the U.S., attention will eventually shift to the emerging world. That theme has played out in the past with other advancements in technology and could be a strong tailwind for decades to come for self-driving hardware and software.