When it comes to investing, Texas has long been associated with the energy industry... and for good reason. Many of the world's biggest energy companies are headquartered there, and a significant portion of North America's oil and gas reserves are found deep under Texas soil.

But the Lone Star State offers far more to investors than just black gold: Texas is a great state in which to do business, or to locate a company's headquarters, thanks to its relatively low taxes, strong transportation infrastructure, access to major shipping terminals, and central U.S. location. This is why some of the biggest non-oil companies in the U.S. are based there. And with a dynamic and growing population of well-educated residents, Texas also is a great place for growing businesses. 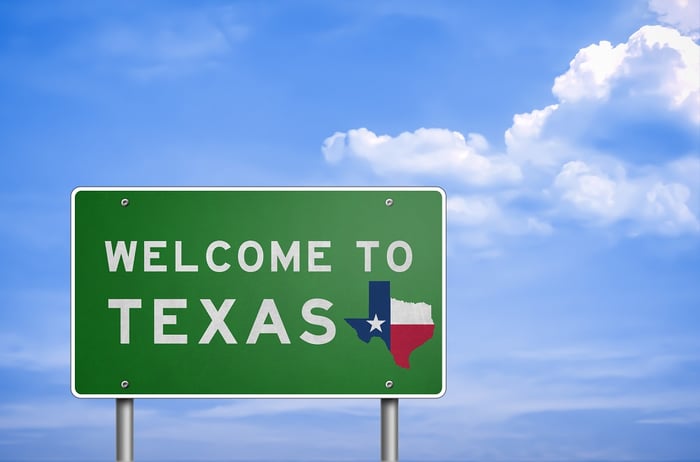 If you're looking to boost your portfolio and go big with Texas, here are five stocks with ties to the state that might be perfect for your portfolio.

Expanding where the growth is

Over the past several years, it's been tough to invest in the energy sector, but with oil prices steadily climbing for much of the past year and holding steady around $70 per barrel, there are a lot of signs that the worst cycle in many years has finally run its course. Phillips 66 (NYSE:PSX) is set for years of profits no matter what happens to oil prices.

Phillips 66 is best known for its refining and gas-station businesses, but there's a lot to like about the Houston-based midstream and downstream giant beyond these slow-growth segments. Since spinning out as a stand-alone company, Phillips 66 has steadily invested in high-growth opportunities in petrochemical manufacturing and oil and gas infrastructure. In 2018, the company will spend $2.3 billion on capital projects, with the majority of that -- $1.4 billion -- dedicated to expanding its export and chemical manufacturing capacity and adding to its pipelines and other terminals.

The company's past investments in those segments have paid off. Earnings in the midstream and chemicals units were up 15% through the first nine months of last year. But after a huge bounce-back year in refining, it's easy to miss out on the long-term prospects for those segments to eventually become the most important parts of the business. Looking at the long term, however, the company's focus on the best-growth segments of the industry, along with a strong record of dividend growth and share buybacks, makes it an ideal long-term holding. 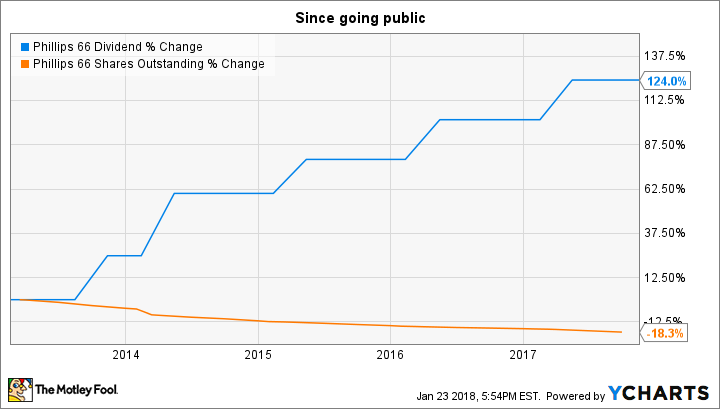 Offshore drillers may have struggled more than any part of the oil and gas industry during the downturn, as this subsector went through its worst patch in decades. But with oil steadily moving higher and producers announcing plans to finally start spending a little more offshore, several of the companies that have managed to ride out the downturn are in very good positions to profit going forward. High-spec offshore driller Ensco PLC (OTC:VAL) is one of my top picks.

While Ensco is domiciled in the U.K., it has deep roots in Texas, where its main operations are based, and where its predecessor company was founded over 40 years ago. And with many of the world's biggest oil producers -- the companies Ensco contracts to drill for -- also headquartered in Texas, it makes strategic sense for the company to have a major presence there.

What's exciting about Ensco? In short, it has managed to not just ride out the downturn, but come through it stronger with its acquisition of Atwood Oceanics adding to its fleet of high-spec drilling vessels. 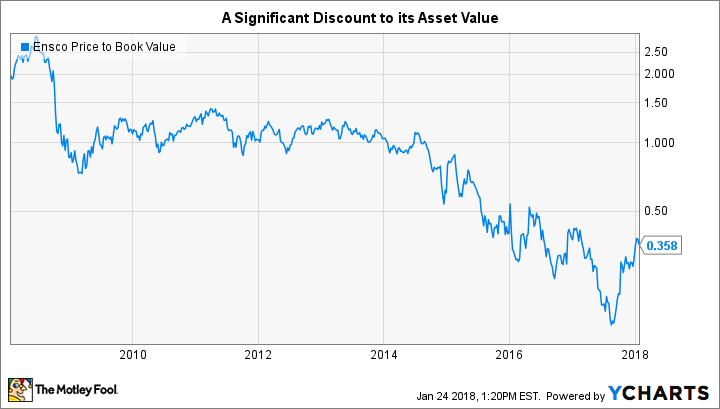 Lastly, Ensco is dirt cheap, trading for barely more than one-third of the book value of its assets. Now's an excellent time to invest in this top-tier offshore driller. It could be rough seas for a bit yet, especially if oil prices fall. But even if that happens, the company's prospects over the next several years look very good.

A dividend as big as Texas

Telecom giant AT&T Inc. (NYSE:T) may not offer the growth prospects you can find with other companies, but at recent prices, it pays a very impressive 5.3% yield -- more than double that of the S&P 500 average. It also has increased the payout every year for three-plus decades. 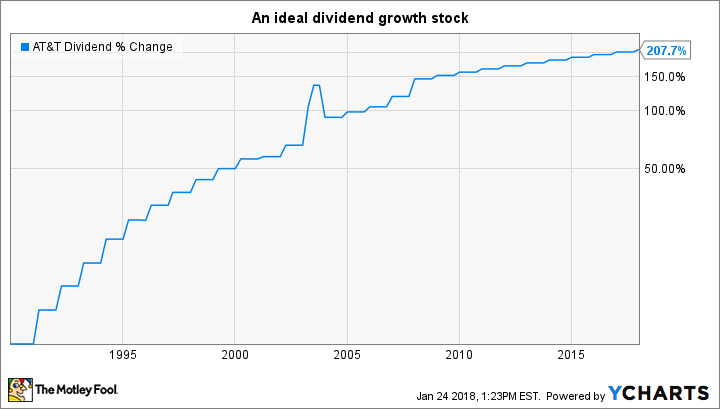 It hasn't been a great year-and-change for "Ma Bell" investors, with a share price that's down almost 15% since mid-2016. But with one of the biggest wireless networks and expanding pay-TV and broadband holdings, AT&T is an ideal stock for investors looking for a predictable source of regular income. And it's trading for less than 13 times next year's earnings, a cheap price that helps create some margin of safety, as well. AT&T may not be a very exciting investment, but if you're seeking a dependable source of income at a reasonable price, the Dallas-based Dividend Aristocrat deserves to be on your list.

Millennials often get a bad rap for being entitled, lazy, and overeducated but undermotivated. The stark reality is that this generation came of age in the worst economic environment since the Great Depression. After years of challenges to get established, they're starting to come into their own. And as the biggest demographic in the U.S., they're turning into a real financial powerhouse.

This is becoming especially true in the housing market, and The Woodlands-based LGI Homes Inc (NASDAQ:LGIH) is taking full advantage of that, investing a lot of resources to build homes aimed squarely at first-time homebuyers, of which more than 40% fall squarely into the millennial generation. That's paying off with record earnings and home-closing growth for LGI Homes. 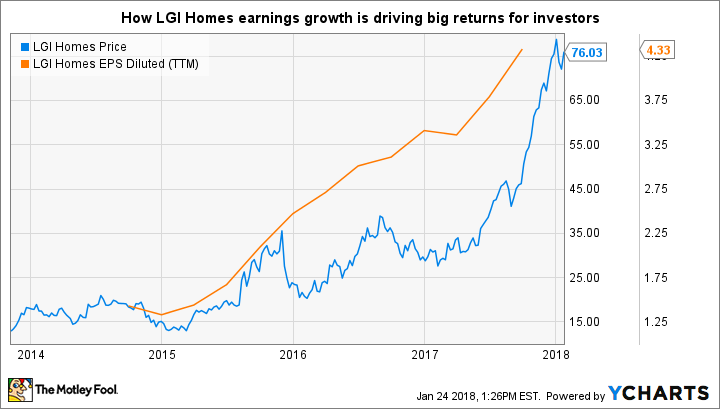 In the third quarter of 2017, the homebuilder closed on 1,729 homes, the most ever in a quarter, and its earnings per share surged 63% as a result. LGI Homes operates in numerous markets, including five of the 10 fastest-growing real estate markets in the U.S., but Texas continues to be a huge part of its business.

With nearly a decade of real estate sales growing faster than the national average, that's likely to remain the case for years ahead. LGI Homes' strong presence in the state, as well as its plans to continue expanding into other high-growth markets with strong millennial demand, make it an ideal growth stock to buy and hold for years to come.

Founded in Austin in 1982, Chuy's Holdings Inc (NASDAQ:CHUY) didn't go public and really start expanding until late 2012. And frankly, it hasn't been a great ride for investors so far, as the "restaurant recession" of the past couple of years has impacted almost every casual-eatery chain in the country. Add in the impact of last year's hurricanes on Chuy's results, and investors in the chain, which is best known for its giant burritos, irreverent and unique decor, and reasonable prices, have experienced an up-and-down ride so far.

Even as the general slowdown in traffic at most casual eateries affected Chuy's, it tended to outperform the averages and report smaller comps and traffic declines than its peers. And with the national metrics starting to improve, Chuy's looks primed to start bucking the trend and return to growth.

Here's what investors should focus on the most: The restaurant business goes through these cycles, where consumer demand ebbs and flows from one year to the next. With Chuy's, the opportunity is long term. With only 91 locations, the company should be able to steadily grow its restaurant count -- and profits -- for many years to come.

There are a million Mexican and Tex-Mex restaurants in the U.S., but Chuy's unique brand, excellent prices, and high-quality food make it very appealing to hungry customers in every economic environment. Because it has some of the strongest returns of any public chain and is trading for some of its cheapest earnings multiplies since going public, Chuy's is likely to be a great investment that's worth buying right now.