AT&T (NYSE:T) and Ford Motor Co. (NYSE:F) each face some uncertainty in 2018. Ford will have to juggle its long-term ambitions with the hefty price tag it will take to achieve them, which will weigh on its near-term results -- something not all investors are willing to accept. AT&T will have to deal with the Department of Justice over its bid to purchase Time Warner. Despite those challenges, though, both offer a great dividend yield for investors now.

As the great Warren Buffett once said, "Be fearful when others are greedy and greedy when others are fearful." That strategy applies well to investing in Ford these days; the automaker has faced a fearful Wall Street ever since the first intimations that auto sales were plateauing in North America. The fear increased recently when Ford lowered its forecast for 2018, based on the assumption of negative impacts from rising commodity costs and its investments in the future of electric vehicles, smart mobility, and driverless cars.

Despite the pessimism engendered by Ford's recent earnings guidance cut from its previous level of $9.9 billion -- which abruptly sent the stock 7% lower -- it's still going to have a profitable year, with earnings of between $8 billion to $9.2 billion. The company is transitioning intelligently for the future, which should be a welcome change for long-term investors from than the Detroit automaker of old, which ignored the trends and paid the price. It's making an $11 billion bet on electrified vehicles, and redirecting $7 billion in research and development funding from passenger cars to light trucks. 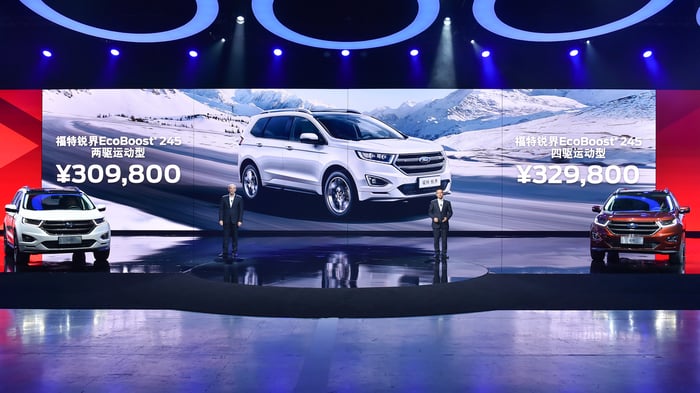 Ford is also trying to offset plateauing sales in the U.S. by doubling down on its efforts in the world's largest automotive market. It plans to launch 50 new models in China by 2025, which the company believes will lead to a 50% boost in revenue there over that time period. But with investors wary of Ford, the company's shares trade at a price-to-earnings ratio of 10 -- suggesting much of the negativity is priced in -- and offers a dividend yield right at 5%, or more than 6% when including the company's 2017 supplemental dividend of $0.13 per share. The company's business is cyclical, and it faces uncertainty about its near-term results, but management is confident its current payout is sustainable through the ups and downs, and that's valuable.

There's no question there's a lot swirling around AT&T at the moment. The telecom juggernaut's potential takeover of Time Warner has hit a snag, and is completely up in the air whether it will come to fruition or not. And while the company seems to have a strategic edge in the race to develop and deploy a 5G network, that effort demands a hefty upfront investment that will take years to bear fruit. It's also attempting to fend off smaller rivals T-Mobile and Sprint, which that are desperate to expand their subscriber counts and match AT&T's and Verizon's scale.

Despite all those issues, however, a couple of things are certain. One is AT&T has proven adept at printing cash, growing its scale, and creating cost advantages that allow it to pressure its competitors. Those factors won't change regardless of how the Time Warner takeover attempt plays out. Already AT&T is a Dividend Aristocrat -- a company that has increased its dividend for at least 25 consecutive years. Indeed, it recently boosted its payout for the 34th straight year, and now yields an impressive 5%.

If the deal does go through, there's no telling how well AT&T would monetize Time Warner content. But it would gain ownership of CNN, HBO, and Warner Bros.' films, among other valuable assets, and in a media world where players without their own content catalogs are increasingly being left in the dust, it gives AT&T a firmer leg to stand on.

Even if this deal gets blocked, AT&T will have other opportunities to deliver its content to its wireless base. That potential, in addition to its ability to produce mountains of cash and deliver consistent dividend increases and yields, is reason enough to buy AT&T stock, despite so much being up in the air.