Cypress Semiconductor (NASDAQ:CY) stock has entered 2018 on a high after soaring nicely last year. The chipmaker has wowed Wall Street by targeting fast-growing areas within the semiconductor space -- such as connected cars, connected homes, and factory automation -- as a part of its Cypress 3.0 strategy.

But will Cypress be able to sustain its impressive momentum in the new year? The company's fourth-quarter results, which will be released Feb. 1, will give investors a clearer picture of where this high-flying chipmaker is headed in 2018. Here's what to expect. 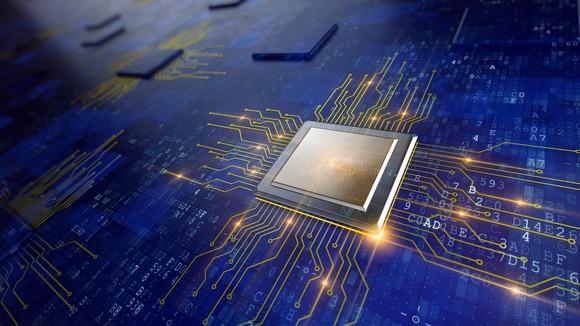 Wall Street expects Cypress to report $0.25 per share in earnings on revenue of $593 million for the quarter, a substantial improvement over the prior-year period's earnings of $0.15 per share and revenue of $530 million. These estimates are in line with the company's fourth-quarter guidance, though it won't be surprising if Cypress beats expectations because it had already booked 90% of its fourth-quarter revenue estimate less a month into the quarter. Investors should note that Cypress is supplying the USB Type-C port controller to Apple's (NASDAQ:AAPL) new iPhones for enabling fast charging, following its design win in the iPad Pro earlier this year.

In fact, Cypress' USB-C revenue had more than doubled from the second to the third quarter because of the iPhone production ramp. Apple's outlook for the December-ended quarter was better than expected thanks to broad-based strength across all product lines and strong iPhone demand.

But Cypress has more going for it than just Apple.

Cypress is following a strategy of attacking markets that are growing at a faster rate than the overall semiconductor industry. Automotive is one such area where Cypress sees a lot of potential because of the growing semiconductor content in cars.

In fact, Cypress' automotive business is currently bigger than NVIDIA's, supplying 30% of its total revenue. The chipmaker looks set to increase its automotive revenue thanks to its smart-product development moves.

For instance, Cypress released an embedded connectivity solution for cars earlier this month that integrates Wi-Fi and Bluetooth connectivity into a single platform. This chip comes equipped with two Wi-Fi modules, allowing all passengers to connect to a car's infotainment system and stream their own video or audio content simultaneously.

Cypress claims that this combo chip is "the highest-performance Wi-Fi device in our IoT (Internet of Things) portfolio," and the only one on the market to simultaneously stream two Wi-Fi signals. What's more, its design has already been approved by several customers to enable a wide range of features such as infotainment and telematics. The chip is in full production and is being shipped inside a couple of models already.

This isn't the only automotive chip released by Cypress of late. The company revealed an automotive touchscreen controller at the Consumer Electronics Show earlier this month to power next-generation infotainment systems. It expects this product to start shipping in the second quarter.

Cypress is going all-out after the automotive infotainment market, which is expected to double in the next five years, according to Markets and Markets. And its USB-C business will continue picking up pace as the technology gains widespread adoption in consumer devices like smartphones and laptops.

For instance, there were 78 PC models shipping with a Cypress USB-C solution last year. The company estimates that this number will swell to at least 120 in 2018. More important, USB-C looks like a big long-term catalyst for Cypress because it holds a 35% share of this rapidly growing space. According to Strategy Analytics and Cypress' internal estimates, the market for USB-C solutions could grow at 89% a year through 2021, giving the chipmaker a nice boost because of its substantial market share.

In all, Cypress seems to be in a strong position to grow its business both in the short and the long run, and a strong quarterly report next week should confirm the same.