It seems like nearly every technology company is pursuing some form of artificial intelligence these days. But while there are many companies hoping to benefit as this burgeoning market expands, NVIDIA Corporation (NASDAQ:NVDA), Amazon.com (NASDAQ:AMZN) and Alphabet (NASDAQ:GOOG) (NASDAQ:GOOGL) are already leading the way. 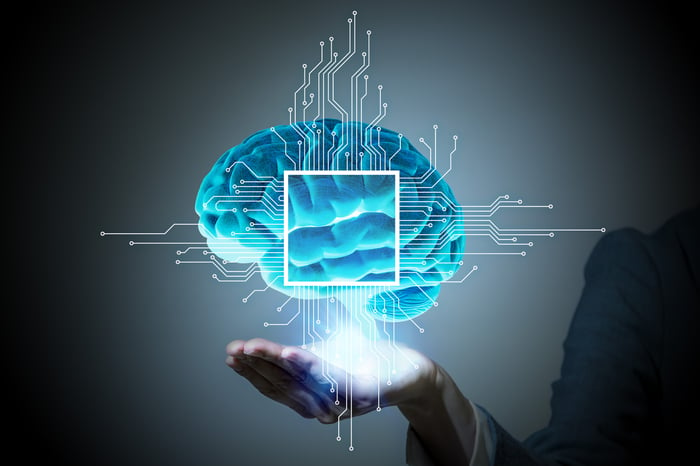 This one is no surprise

Alphabet likes to have its hands in nearly every new technology trend, and AI is no exception. Specifically, the company is focusing on three key areas: AI services in the cloud, driverless cars through its Waymo subsidiary, and implementing AI into its flagship services. The company is doing much more in AI, but let's just start with these.

In the cloud space, Alphabet's Google Cloud platform integrates AI services that companies and developers can tap into to make their own AI products. For example, Google offers its machine learning software, called TensorFlow, for free to developers that help them to build apps that have machine-learning capabilities (it's the same tech that's used to easily find images in the Google Photos app). The company hopes that combining TensorFlow with its cloud-computing services will make for a winning combination as it tries to take a larger share of the $411 billion market (by 2020).

Alphabet is also using its AI know-how to build driverless car software through its Waymo subsidiary. Waymo announced at the end of last year that it's now testing its driverless minivans (void of any human driver) with the public in Arizona. The company has already logged 4 million miles with its vehicles, and Waymo is setting itself up for further ride-hailing driverless car services in the future.

The tech giant is also busy building its second-generation AI chip, called the Tensor Processing Unit (TPU) which will be used for its cloud services and is improving the company's own services, like Search and Gmail. Alphabet can use AI to better understand what its users are looking at, watching, and reading, and then use that information to display more targeted ads. Considering that the company makes about 86% of its top line from selling ads from Google services, it's no wonder Alphabet is using AI to make its ad business even better.

A chipmaker with AI on the brain

Like Alphabet, NVIDIA is building its own AI chips and is working on its own driverless car technology as well. But the difference is that NVIDIA sells both its chips and its autonomous vehicle tech to other companies -- and it's already paying off.

The company's AI graphics processing units (GPUs) are already used by Alphabet, Microsoft, and Amazon to make their AI cloud computing services a reality. More and more companies are adding GPUs to their data centers to make them better at things like image recognition, and that's led to NVIDIA's data center revenue climbing by 109% in the most recent quarter.

In addition to data center opportunities, the company is also on the third version of its semi-autonomous driving computer, called Drive PX Pegasus. The computer fits into the trunk of semi-autonomous vehicles and uses NVIDIA's GPUs to process images from a vehicle's cameras, so the car can understand what it's looking at while driving. More than two dozen companies are already using Drive PX Pegasus to create autonomous taxis with Level 5 automation (no human driver needed).

NVIDIA's GPUs are also quickly becoming a powerful tool for other tech companies to utilize in building strong AI services. That's led the company to estimate that its total addressable market for AI (for data centers, driverless cars, AI for cities, etc.) is about $40 billion between now and 2025.

Amazon makes the majority of its revenue from its e-commerce platform, but CEO Jeff Bezos explained the brains behind its online retail platform in an investor letter last year:

Machine learning drives our algorithms for demand forecasting, product search ranking, product and deals recommendations, merchandising placements, fraud detection, translations, and much more. Though less visible, much of the impact of machine learning will be of this type -- quietly but meaningfully improving core operations.

Bezos said investors should watch the machine-learning space closely (which is part of the broader AI market) because of its impact on many of Amazon's businesses. But the company isn't just using AI to make its online retail recommendations better; it's also using it to expand its Amazon Web Services (AWS) in cloud computing as well.

The company already holds 40% of the public cloud-computing market and offers AI services like image recognition and language translation.

Amazon sees AI as another tool it can use to make its AWS services stronger, and late last year, it teamed up with Microsoft to offer new AI tools to combat Google's expansion into cloud computing. Amazon is focused on AI cloud computing because the company brings the vast majority of its operating profit from its AWS cloud services. The more it stays ahead of Google and others in the cloud market, the more it stands to add to its bottom line.

Investors should also take note that Amazon's Alexa virtual assistant is also a play on basic artificial intelligence in smart homes. Amazon already holds about 70% of the smart speaker market, and 2018 is poised to be a big year for smart speaker adoption. RBC Capital estimates that Amazon could add $10 billion to its top line by 2020 through its smart speakers, and the company's AI for Alexa is helping make that a reality.

It's best to keep in mind that artificial intelligence is still a small part of these companies' revenues, but that doesn't make their AI pursuits irrelevant. Artificial intelligence is making the products and services that Amazon, NVIDIA, and Alphabet offer much better, and that, in turn, should help fuel their growth. AI will likely transform nearly every aspect of these companies in the coming years, and investors would be wise to take notice now.