The volume of mergers and acquisitions in the global aerospace and defense industry hit a record high in 2017, delivering to investors some nice takeout premiums in the process. Some of the factors driving consolidation are still in place heading into 2018. Could more dealmaking be on the horizon? 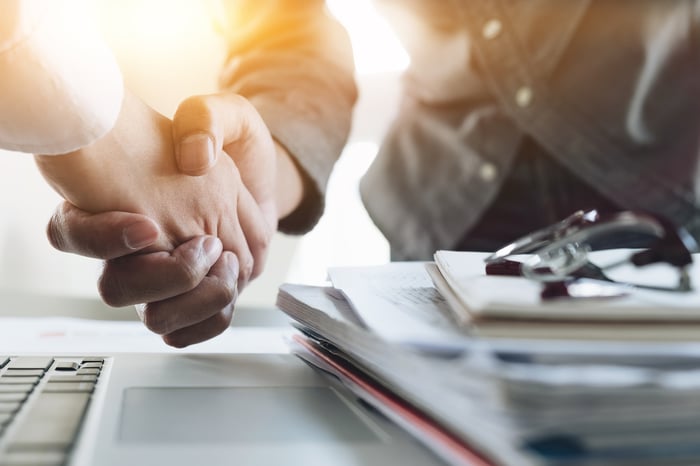 There were lots of agreements reached between aerospace companies in 2017. Image source: Getty Images.

A run of big transactions

A total of $72 billion was spent on aerospace and defense M&A globally in 2017, according to consulting firm PwC, surpassing the $67 billion spent in 2015 to make last year the highest on record. The actual number of deals, 454, remained steady compared to 2016, but the average deal size increased 69% from 2016.

There were a number of megadeals in the industry in 2017, led by United Technologies' (NYSE:RTX) $30 billion takeover of Rockwell Collins (NYSE:COL) (an 18% premium for Rockwell holders) and Northrop Grumman's (NYSE:NOC) $9.17 billion purchase of Orbital ATK. (NYSE:OA) (a 22% premium for Orbital holders). Interestingly, Rockwell Collins was also involved in the largest deal of 2016, acting as the buyer in a $8.2 billion deal for B/E Aerospace.

PwC attributed the surge in dealmaking to a range of factors, separating out commercial aerospace transactions like UTX's Rockwell takeover with more defense-minded purchases like Northrop-Orbital.

On the commercial side, the business remains strong in terms of new-jet orders and growing airline utilization of equipment, which should lead to more used-parts sales. But increased competition and pressure from Boeing and Airbus on margins has led companies like Rockwell, in 2016, and then UTX, in 2017, to seek opportunities to consolidate.

On the defense side, buyers were motivated by a sense that fresh opportunities are on the horizon. A combination of growing geopolitical tension and the Trump administration's call for increased defense budgets has led buyers like Northrop to make investments in missile defense and space, as well as in artificial intelligence, robotics, and cybersecurity.

Companies have also enjoyed impressive run-ups in share price -- upward of 30% in one year for some defense contractors -- making buybacks less impactful and likely causing conversations about other ways to deploy capital.

None of those factors disappeared when the calendar turned. If anything, new factors, including increased liquidity thanks to tax reform, should provide more firepower to potential consolidators.

There are limits investors should be aware of. Since the late 1990s, the Pentagon has frowned on deals between prime defense contractors, eager to preserve competition in the supply base, so it is hard to envision a U.S. defense deal substantially larger than the Northrop-Orbital transaction. But there has also been a steady mix of divestitures driven by portfolio shaping -- for example, Leidos Holdings' $5.9 billion acquisition of the defense IT business of Lockheed Martin, which followed Lockheed's $9 billion purchase of helicopter manufacturer Sikorsky Aircraft from United Technologies -- so deal volume can remain healthy without primes buying primes.

Among the potential buyers, General Dynamics (NYSE:GD) stands out on the defense side due to its pristine balance sheet and a potential desire to gain scale in areas where the Pentagon is focused. Among commercial companies, Spirit AeroSystems (NYSE:SPR), after spending a number of years revamping itself, is now financially healthy and could use M&A to diversify itself away from its reliance on former parent Boeing.

It's unwise to invest in a company solely as a bet on a buyout, but fortunately the aerospace and defense sector is loaded with healthy companies that can be a solid part of any long-term portfolio. A period of strong M&A providing some added pop is just the icing on the cake.