There's little doubt CEO Jordan Wu and the rest of the Himax Technologies (NASDAQ:HIMX) team were glad to put 2017 in the rearview mirror. Though the year ended on a positive note, it sure didn't start that way. The result was bearishness nearly across the board, including written attacks from a couple of industry analysts who were, shall we say, less than complimentary.

But with the aftertaste of 2017 fading, Himax is poised for another stellar run over the next five years. If you're not overly familiar with Himax, you're not alone. With a market capitalization of just $1.45 billion, Himax is relatively small potatoes compared with many semiconductor manufacturers. But its size will work in its favor in the coming years, as will Himax's entry into new, fast-growing markets. 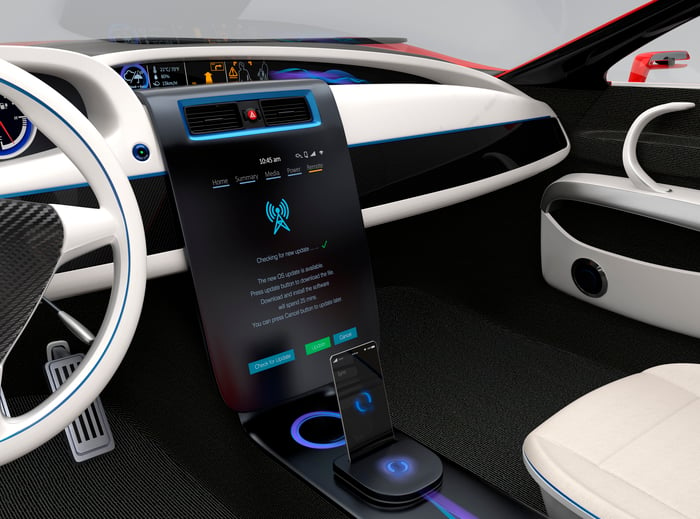 The production capacity concerns and new product development delays that plagued Himax a year ago are no longer a concern, as it demonstrated in the third quarter. Because of the earlier snafus, to get a true picture of Himax's performance, sequential comparisons paint a clearer picture of its results. And toward that end, Himax delivered big-time in 2017's third quarter.

Himax generated $197.1 million in revenue for the quarter, which was not only on the high end of expectations, but it was an impressive 30% increase sequentially. Each of Himax's units grew quarter over quarter, including its all-important non-display driver sales. As it stands, Himax generates 45% of its revenue from small and medium-sized drivers, primarily for smartphones.

But its reliance on display drivers is slowly changing, particularly because of Himax's new high-end wafer level optics (WLO), and its sensors targeting the smart-car market. Last quarter, Himax's non-driver unit was propelled by outstanding WLO sales. Non-driver revenue soared 86% to $55 million compared with the prior quarter and now equals 28% of total sales.

The new-ish automotive division, which targets the exploding market for smart and secure infotainment systems, rose by single digits sequentially, and more than 20% from a year ago. Automotive sales generated over $20 million last quarter, a new Himax record.

Himax isn't the only provider focused on the fast-growing smart-car market, let alone the Internet of Things (IoT) in general. Himax competitor Cypress Semiconductor (NASDAQ:CY) is coming off a record-breaking quarter of $604.6 million, led by a jaw-dropping 80% jump in IoT connectivity sales. Cypress just released what it bills as the "industry's most advanced automotive touchscreen controller," as it continues to reinvent itself. Not to be outdone, Himax shared some intriguing news of its own last quarter.

A peek at the future

In partnership with Qualcomm (NASDAQ:QCOM), Himax unveiled its SLiM 3D sensing solution designed specifically for the billions of Android OS devices around the globe. Himax is getting so many inquiries from prospective customers, it's authorized a second capital expenditure round to further expand its production capacity. The new SLiM solution is expected to begin shipping the second half of this year.

SLiM also has implications for Himax's smart-car initiative. Several of the world's largest auto manufacturers have opted to go with Android. The world's most popular OS now includes a system utilized throughout the entire vehicle, not just the infotainment unit. Keeping all that data secure, yet easy to access, is exactly what Himax's SLiM 3D sensing solution brings to the table. Yes, it's a competitive market, but considering its market cap, it won't take too many wins to really move Himax's revenue needle.

The additional production capacity is also needed for Himax's new WLO product following a major coup that began paying dividends last quarter. Himax recently began a "major ramp [up] and shipment" of its WLO offering to a "leading customer," and Wu said shipments would really accelerate in the fourth quarter and into fiscal 2018.

For Himax, the next five years are lining up nicely. Growth investors will enjoy the 2.9% dividend yield Himax offers, but given the view of some analysts, expect some ups and downs. But with time and increased capacity to meet growing demand for its improved and growing product line, Himax will be flying high by 2023.