The Japan-based entertainment conglomerate delivered booming profit growth on modest sales increases, then handed the reins to the CFO who helped shape this era of fiscal discipline.

Electronics and entertainment conglomerate Sony (SONY 1.39%) crushed analyst estimates and raised full-year profit targets in an earnings report posted early Friday, covering the third quarter of fiscal year 2017. At the same time, the CEO who drove Sony's turnaround over the last six years passed the baton to his CFO. Wall Street applauded all of these details, driving share prices as much as 9.7% higher.

Sony's third-quarter results by the numbers

Booming sales were supported by fiscal discipline. Operating margins widened from 3.9% in the year-ago quarter to 13.1% in Q3 of fiscal year 2017. The semiconductor segment's profitability more than doubled year over year in spite of a modest 4% revenue increase.

The all-important gaming and network services division delivered 27% of Sony's total sales, up from 26% in the year-ago period, but its share of the operating profits fell from 54% to 24%. Within this business segment, Sony shipped 9 million PlayStation 4 consoles in the third quarter, down from 9.7 million units in the previous holiday quarter. The company has put a total of 76.5 million PlayStation 4 units in the hands of consumers so far, on pace to eclipse the 83.8 million unit sales of the PlayStation 3 console. Sony is winning this generation of the Console Wars, though the PS4's sales may have peaked by now. 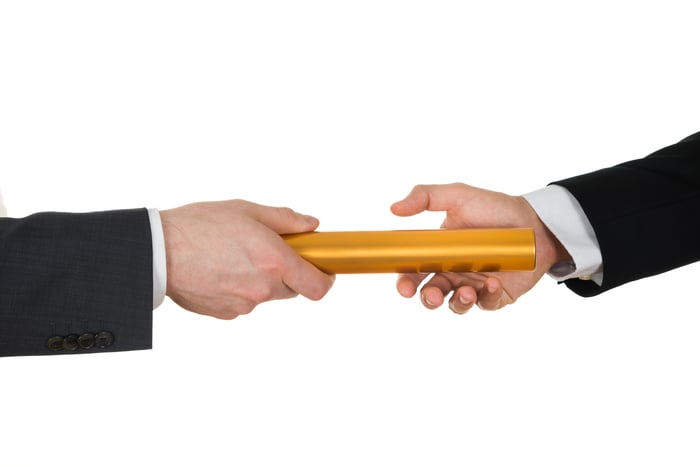 Change at the helm

Looking ahead, Sony held its full-year revenue expectations steady at $77 billion. At the same time, operating profit targets were raised by 14% compared to the full-year guidance provided three months ago. In particular, music sales are exceeding management's expectations and delivering strong operating profits.

CEO Kazuo Hirai chose this moment to step down from the post he took in April 2012.

"As the company approaches a crucial juncture, when we will embark on a new mid-range plan, I consider this to be the ideal time to pass the baton of leadership to new management, for the future of Sony and also for myself to embark on a new chapter in my life," said Hirai in a prepared statement.

"My first priority will be to finalize our next mid-range corporate plan starting in April, together with our immediate business plan for the fiscal year 2018, and then move ahead swiftly with implementation," Yoshida stated.

The "mid-range" references in both of these statements are to Sony's habit of setting business goals for two years at a time. In the next stage, which starts in March, Sony will pursue new business ideas tied to its diverse range of consumer-facing entertainment and electronics operations. Yoshida's financial background should give Sony a more mellow tone for this push than Hirai's constant search for The Next Big Thing.

That being said, Hirai and Yoshida have worked together since 2013, so I'd be surprised to see any huge changes in the company's direction at this point. The current formula proved quite successful, after all, more than tripling Sony's share prices over the last five years amid shrinking revenues but booming cash profits. And Hirai isn't moving far away -- the former CEO is picking up the chairman's role instead.