Please ensure Javascript is enabled for purposes of website accessibility
Log In Help Join The Motley Fool
Free Article Join Over 1 Million Premium Members And Get More In-Depth Stock Guidance and Research
By Chris Neiger - Feb 5, 2018 at 8:53AM

You already know these companies -- but maybe not as top information technology companies.

Companies that were once the backbone of the information technology hardware market have been outpaced by other competitors over the past few years that are focused on selling services to enterprise customers.

That shift means that companies you may have never thought of as IT stocks are now excellent investments. I'm talking specifically about Alphabet (GOOG -0.27%) (GOOGL -0.21%), Amazon.com (AMZN 3.15%) and Microsoft (MSFT 1.07%). Don't think of these companies as just a search engine business, an online retailer, and a computer software maker, because these companies are transforming the IT industry right now -- and each will likely outpace their competitors for years to come. 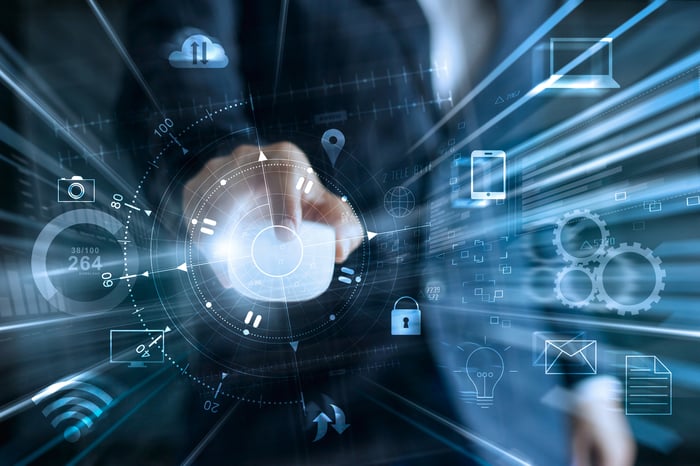 Alphabet is, of course, the tech conglomerate made up of many different companies that used to be known as Google. The company's all-encompassing approach to technology means that there's very little within information technology that Alphabet doesn't handle. Artificial intelligence, cloud computing, driverless cars, connected homes, augmented reality, the Internet of Things, are all easily in Alphabet's wheelhouse.

To understand where Alphabet is going in IT, look no further than what Google's head of cloud computing, Urs Holzle, said back in 2016. Holzle set a goal of bringing in more revenue from the company's cloud computing services by 2020 than Google earns from its advertising segment. That's an ambitious goal considering that 90% of Google's sales come from advertising.

Even if Google's cloud services sales fall short of that goal it still should be taken as a huge sign of where the company is headed. Google Cloud Platform has just 6% of the cloud computing market right now, but it has its eye on what will become a $411 billion market by 2021. The company has been busy wooing developers to use its machine learning tools in order to build out its cloud computing market share.

Yes, Alphabet is still in the business of using data to sell ads, but the company is also expanding quickly into new IT businesses by building its own artificial intelligence processors and teaming up with other cloud players to grab a bigger slice of this market. With the company's dominance across many tech segments and its $100 billion in cash there's no reason to keep Alphabet off of your information technology investment short list.

An online retailer with an IT bent

Amazon has become synonymous with online retail shopping and receives lots of attention for its Echo devices and far-out ideas of drone delivery. But when it comes down to the company's operating profit Amazon is an information technology company.

The company made a staggering $4.5 billion from its public cloud computing service -- Amazon Web Service (AWS) -- in the fourth quarter 2017. That's up 40% from the year-ago quarter and a total of $12.3 billion in the first nine months of 2017. Most importantly, Amazon earned about $1.2 billion in operating income from AWS, compared to just $112 million from its North American online retail sales. All of which means that AWS is already lucrative for Amazon and is easily the company's most profitable business.

That should be enough for investors to consider Amazon a strong IT play, but there's more. The most recent data shows that AWS holds about 35% of the public cloud computing market right now. AWS is used for everything from data storage and backups, to security, computing, databases, etc. and Amazon's cloud computing market share far outpaces any of its competitors.

Amazon's far-reaching AWS services and its current market share mean that the company should be able to retain its leadership position for a long time. With AWS bringing in most of the company's profits you can bet that Amazon will continue to invest in this stellar strategy -- and will likely make a bundle doing it. 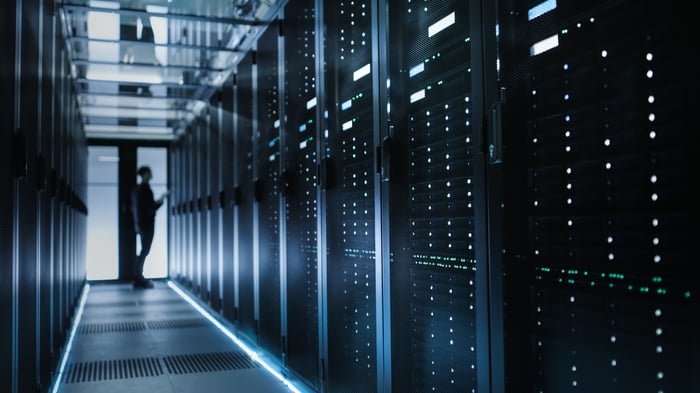 An old tech stalwart with a new image

If you're tempted to dismiss Microsoft as being out of its league among Alphabet and Amazon, don't make that mistake. Microsoft holds 11% of the public cloud computing market and its business is growing rapidly. The company managed to grow its market share by three percentage points over the past four quarters, according to Synergy Research Group.

That jump is due, in part, to the company's 14% year-over-year increase in revenue from its Intelligent Cloud Business, which includes its Azure public cloud and Windows Server services. But the company is also dominating from its commercial cloud services (like its cloud-based Office 365 software).

Microsoft's CEO, Satya Nadella, set a goal back in 2015 for the company to reach an annualized run rate of $20 billion for the company's commercial cloud business by mid-2018. It was a big prediction at the time, but just this past quarter Microsoft surpassed the goal months ahead of schedule.

Microsoft has successfully transitioned into the cloud computing space and its No. 2 position in the market shows just how well it's already competing. I like the company's balance of its Azure public cloud offerings mixed with its commercial cloud software products. The blend of those two give enterprise customers, developers, and everyday consumers plenty of reasons to use Microsoft's services for years to come.

It's worth pointing out that Amazon has such a massive lead right now that if you were to invest in any of these companies solely on their cloud computing merits, then Amazon should be your choice. But investors should look at the big picture with each of these stocks. Alphabet will continue to be a dominant tech leader, even if its cloud computing profits fail to keep pace with Amazon's. Additionally, Microsoft and Google recently teamed up to develop some machine learning services together in an effort to keep pace with Amazon. All of which means that we're likely to see much more IT innovation from these companies in the coming years.