GE is likely to get dropped from the Dow Jones Industrial Average in the near future. But Amazon.com won't be its replacement -- despite its rapid growth and broad impact on the economy.

Storied U.S. industrial giant General Electric (GE -0.20%) has had a rough time over the past year. Earnings expectations have plunged, driven primarily by a big downturn in the company's power business. Last month, GE announced a massive charge related to its legacy insurance operations. This sparked fears about what other problems may still be lurking beneath the surface.

In response, its new management team plans to simplify the company, but many investors are worried that it won't be enough. As a result, GE stock has lost about half of its value over the past year. 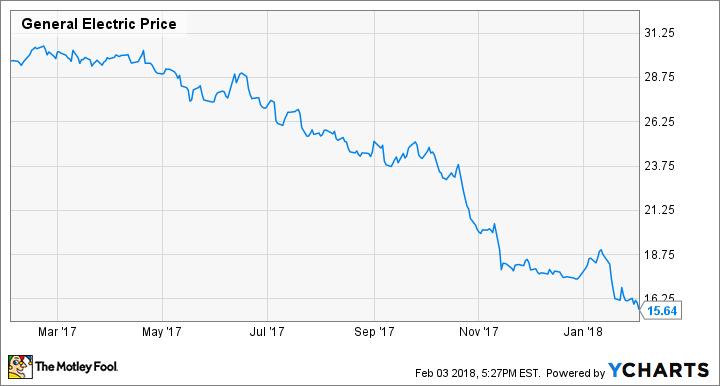 GE's moribund stock performance could cause the company to lose its place in the Dow Jones Industrial Average. Tim Mullaney of MarketWatch recently suggested that Amazon.com (AMZN 3.15%) should replace it. Amazon is extremely unlikely to join the Dow, though. Among today's fast-rising companies, Facebook (META -0.76%) is the most likely Dow candidate.

The stock price is the problem

General Electric is the only one of the 12 original Dow components that is still part of the index. Thus, dropping GE from the Dow would be a momentous decision. However, the index committee may not have much choice anymore.

The problem is not that General Electric has suddenly become irrelevant. Analysts expect it to produce more than $120 billion of revenue this year. Even if the company slims down by selling or spinning off its interests in oil and gas, transportation, and lighting, it will still have about $100 billion of annual revenue. That puts it in the upper echelon, even within the Dow index. Among General Electric's main business segments, only GE Power is shrinking.

Instead, GE is likely to get booted from the Dow because of its low stock price. The Dow Jones Industrial Average is a price-weighted index, which means that low-priced stocks like GE -- which ended last week at $15.64 -- have a very low weight in the index. (By contrast, Boeing is the highest-priced Dow component, with a stock price of $348.91 as of Friday's close.) 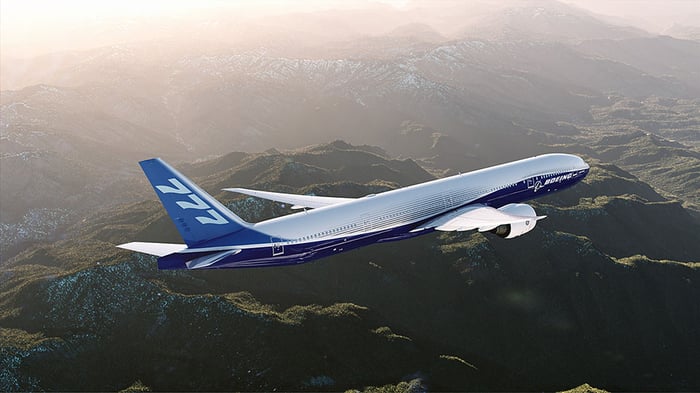 GE is likely to be replaced in the Dow by a higher-flying stock. Image source: Boeing.

Right now, General Electric stock makes up just 0.4% of the Dow index, compared to 9.4% for Boeing. In short, it has become virtually irrelevant to the index's performance -- as seen from the fact that the Dow has soared over the past year despite GE's woes. In the past, this has been sufficient cause for removing stocks from the Dow index.

Amazon.com stock is too pricey for the Dow

In terms of fundamentals, adding Amazon to the Dow would make a lot of sense. As Mullaney notes, it's a massive, fast-growing company that is quickly diversifying beyond its retail roots.

However, its sky-high stock price means that it won't be considered for inclusion in the Dow. Based on its Friday closing price of $1429.95, Amazon stock would make up nearly 28% of the index, completely dominating its performance.

Mullaney does recognize this obstacle, and suggests that Amazon could split its stock to put the stock price back in range for Dow inclusion. However, Amazon's last stock split was in 1999. It seems like management has made a philosophical decision to avoid the financial engineering of stock splits and let the stock price go where it will.

CVS Health was Mullaney's "backup" choice for inclusion in the Dow. It's already No. 7 on the Fortune 500 list of the largest companies by revenue, and will move up further if its proposed acquisition of Aetna is approved. As one of the leading healthcare companies in the U.S., it is likely to join the Dow index sooner or later.

However, if the selection committee wants to add one of the most prominent high-growth companies to the index, Facebook is the obvious choice.

First of all, the stock's Friday closing price of $190.28 puts it well within the price range of the other Dow components. Furthermore, Facebook has a massive global audience of billions of users across a handful of dominant apps. This gives it a huge amount of leverage with advertisers. Revenue zoomed past $40 billion last year -- up from just $18 billion two years earlier -- and analysts expect Facebook to generate about $70 billion of revenue in 2019.

There are plenty of good candidates for the Dow index if the committee dumps GE because of its slumping stock price. But among fast-growing internet stocks, Facebook is the logical choice.