Betting on Sprint recovering market share may seem enticing, but odds are the company will stay well behind wireless leaders.

In the U.S., Sprint (S) has been the third wheel to AT&T (T 1.67%) and Verizon Communications (VZ 1.75%) for more than a decade, despite efforts to turn itself into a sustainable challenger. The company's smaller network has forced it to compete for customers with lower prices, which squeezes margins and makes it hard to invest in the powerful network it was lacking in the first place.

To make matters worse, T-Mobile (TMUS 1.69%) has been pricing and advertising aggressively, taking the low price position in the market that Sprint wants to dominate. This rough competitive environment is why I don't think now is the time to get greedy with Sprint's stock. 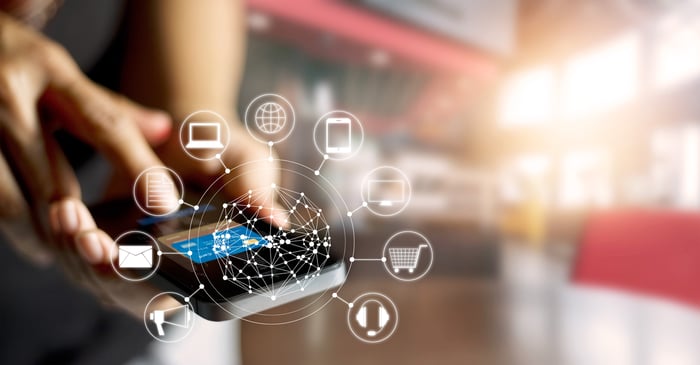 The telecommunications business is all about scale, and Sprint is far behind larger competitors Verizon and AT&T. That's why the company has to compete by charging lower prices. You can see both sides of that dynamic in the chart below. 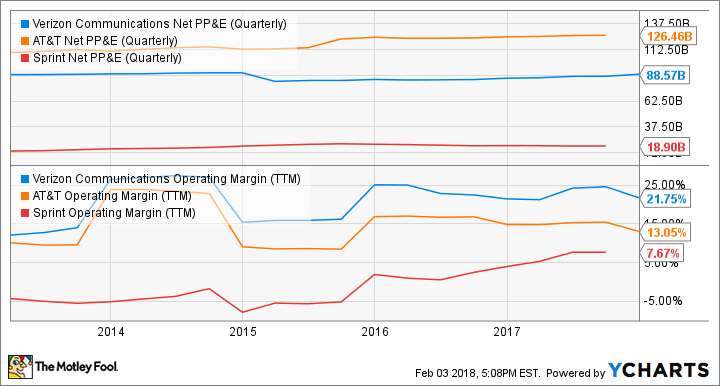 It may seem like Sprint is slowly catching up to its larger rivals in 4G, and it's true if you look at the margin profile above. But the fact that it doesn't have as much existing infrastructure and generates less profit to fund future growth will make it difficult to make the switch to 5G, which will be critical for wireless companies in the future.

In the last few years, AT&T and Verizon have had to compete with Sprint and T-Mobile more on price, meaning lower cash flow and profits from their businesses. This may be seen as a point of weakness for Sprint's larger rivals, but it highlights the weak position Sprint is in. Look at the chart below and see that Verizon and AT&T may have lower free cash flow than they did five years ago, but they're still generating billions annually. Sprint, on the other hand, has had to spend billions in the last five year to catch up to larger rivals, and it's still left with negligible free cash flow to fund future investment. 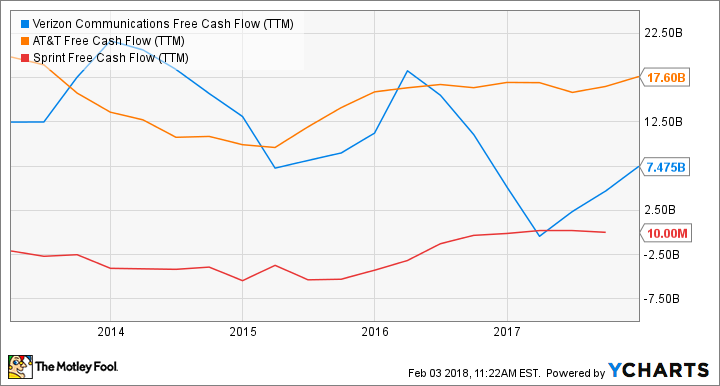 What Verizon and AT&T are doing is squeezing competitors like Sprint so they don't have the scale or the cash flow to invest in next-generation wireless networks.

Sprint will fall behind in 5G

Verizon and AT&T have said they'll roll out 5G networks in limited markets by the end of 2018, leading the new technology charge. It's those new networks where both companies intend to intrench leads as early as possible by building a nationwide network and building a network of customers.

Sprint says it'll begin building its 5G network in early 2019, potentially putting it a year behind. T-Mobile is in even worse shape, saying it won't launch a 5G network until 2020.

And as 5G rolls out, we need to consider how big the networks will be. AT&T and Verizon will get head starts on Sprint, which will be crucial in learning how to deploy the technically complex network, and they'll likely have a much larger scale in their 5G networks. This is important because early adopters of 5G will want the best network, something AT&T and Verizon have typically had a lead in as networks advance.

Add it all up and Sprint is being squeezed in 4G networks, making it tough to fund 5G networks, and likely relegated to a third or fourth place in the U.S. wireless market. It'll be difficult to make a profit from that third or fourth position, which is why I wouldn't get greedy with the company's stock.