Please ensure Javascript is enabled for purposes of website accessibility
Log In Help Join The Motley Fool
Free Article Join Over 1 Million Premium Members And Get More In-Depth Stock Guidance and Research
By Daniel B. Kline - Feb 9, 2018 at 4:02PM

An industry in turmoil shows some signs that stability is coming.

Newspapers have had a rough few years. The internet changed everything for print publications, and many have struggled to adjust to the new digital reality.

The best newspaper stocks, The New York Times Co. (NYT -3.48%), Gannett (GCI), and News Corp. (NWS -1.50%), have embraced the changing marketplace. That does not mean any of the three companies have figured everything out, but none of them have clung to the past. 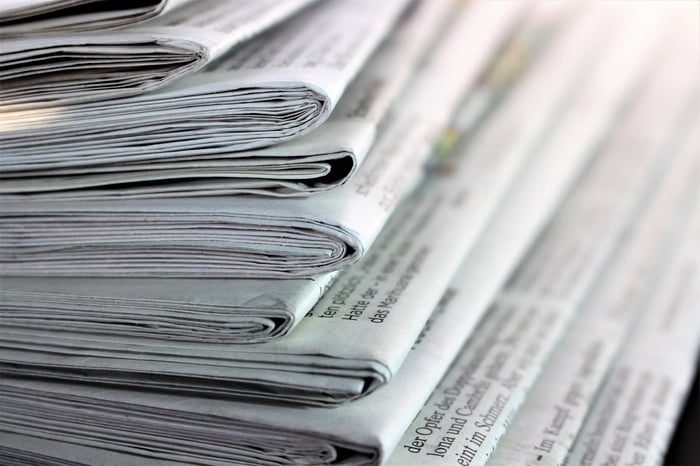 What happened to the market?

Consumers opting to read news on the internet instead of in print disrupted the newspaper ad model. You could argue that this change dates back all the way to 1995, when Craigslist launched and began to undermine the classifieds business that once provided steady revenue for newspapers.

That disruption continued as readers left print for digital. When that occurred, newspaper consumption stopped being linear. That meant print ads lost value because fewer people saw them, and digital ad rates could not make up for those losses.

Those changes devastated the newspaper industry. While The New York Times Co., Gannett, and News Corp. have not escaped those struggles, they have made some strong strides in finding new revenue paths forward. 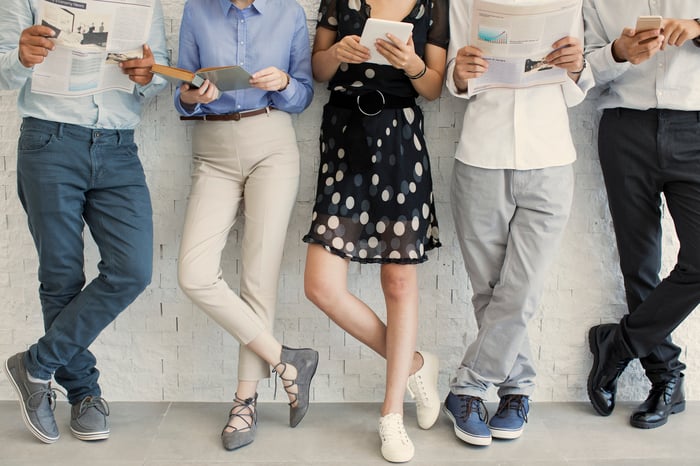 How is The New York Times doing?

The company saw lower print advertising revenues, which were partially offset by higher subscription revenues. The company added 99,000 digital news subscriptions in Q4 and 157,000 total net digital-only subscriptions, including news along with the company's Cooking and Crosswords products. CEO Mark Thompson offered encouragement after a year "marked by growth and innovation."

We had our best revenue growth in many years, driven by strong digital subscription revenues, which increased by over $100 million year-over-year. Subscription revenues were over one billion dollars in 2017, or 60 percent of the year's total revenues, and is a clear sign that our subscription-first business model is proving to be an effective way to support our broad journalistic ambitions.

How is Gannett doing?

Gannett operates a chain of local newspapers around the country under the banner of its flagship paper, USA TODAY. These local papers, dubbed the USA Today Network, reached record audiences in Q3, according to the companies earnings release.

That does not mean the quarter was clear sailing for Gannett. Operating revenue dropped to $744.3 million from $772.3 million the period a year ago, which the company blamed on a drop in print advertising and circulation revenues.

On the positive side, that expected decline was partially offset by higher digital advertising revenues. The company touted in the earnings release that on a same-store basis, Q3 revenue dropped by 9.4%, an improvement over the Q2 decline of 10.6%. Gannett credits that improvement to digital revenue growth. Total digital revenues in the third quarter increased to $245 million, approximately 33% of total revenue.

"Throughout the quarter, we enhanced audience growth and engagement, expanded our marketing services capabilities and added new offerings to our portfolio," said CEO Robert J. Dickey in the press release. "We delivered strong year-over-year earnings growth in the third quarter, despite challenging print advertising trends."

How is News Corp. doing?

While it owns The Wall Street Journal, New York Post, and various other newspapers around the world, News Corp. is less a pure newspaper play than the other two companies on this list. The company also owns a book publishing business and has some cable television interests. Still, $1.29 billion of its $2.18 billion came from its News and Information Services division in the second quarter of its fiscal 2018.

That division was flat for the quarter while the company as a whole posted a 3% gain. Advertising revenues declined 6% compared to the prior year while circulation and subscription revenues increased 6%. That was driven "primarily due to a healthy contribution from Dow Jones,which saw a 10% increase in its circulation revenues," according to the earnings release.

"The robust first half results highlight the virtue of our strategy to become increasingly digital and global, the discipline of our financial management, and our commitment to premium content and high-quality, high-integrity news," CEO Robert Thomson said in the earnings release. "First half revenues were up 4% and profitability improved by 27%, including strong results in the second quarter."

The company also reported some big gains in digital subscriptions across its properties that sell them. (Some of its newspapers have free digital products operating on an ad-based model.)

It's a slow transition

The newspaper business did not fall apart in a quarter, or even a year, nor will its problems be solved that quickly. However, these three companies have all taken major steps toward righting their ships. They clearly understand that the future is digital, and making up lost revenue will require a variety of streams. This won't be a short road, but The New York Times Co., Gannett, and News Corp. appear to be on the right path.

Why Gannett Stock Is Rising Today

Why I Just Invested in America's Largest Newspaper Publisher