Please ensure Javascript is enabled for purposes of website accessibility
Log In Help Join The Motley Fool
Free Article Join Over 1 Million Premium Members And Get More In-Depth Stock Guidance and Research
By Danny Vena - Feb 11, 2018 at 9:45AM

Strength in parks and resorts was just one thing Disney investors had to cheer about.

Shareholders of The Walt Disney Company (DIS -1.31%) have had a lot to keep up with in recent quarters. Concerns regarding flagging growth in the company's cable networks have been offset by excitement surrounding the acquisition of certain media assets of Twenty-First Century Fox (FOX) (FOXA). Investors are also eagerly awaiting the debut of an ESPN streaming service, which is scheduled to launch this spring, and an over-the-top Disney branded service that will make its debut in late 2019.

Disney announced the results of its fiscal 2018 first quarter (which ended Dec. 30, 2017) and addressed these issues and more on a conference call to discuss its financial results. After two quarters of declining revenue, the House of Mouse returned to growth, led by strength in the company's parks and resorts business. 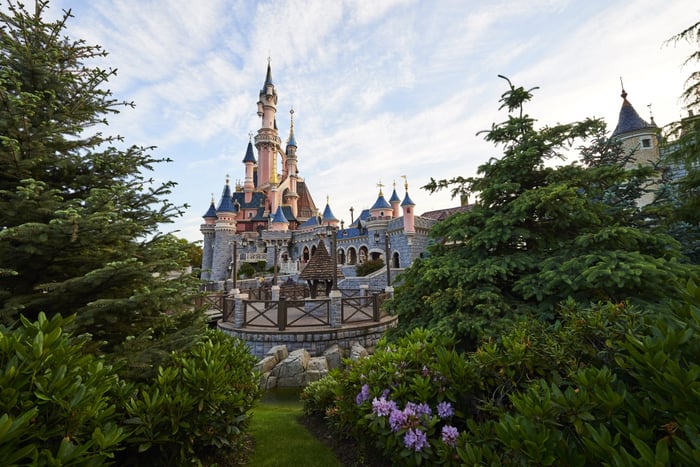 For the just-completed quarter, Disney's revenue increased to $15.35 billion, up 4% year over year, and below analysts' consensus estimates of $15.48 billion. The company reported a profit of $4.42 billion, which increased 78% over the prior-year quarter. This produced earnings per diluted share of $2.91, up 88% year over year.

It is important to note that the company recorded a net tax benefit of $820 million as the result of recently passed U.S. tax legislation. Excluding this one-time event would have resulted in earnings per diluted share of $1.89, an increase of 22% over the prior-year quarter, and surpassing analysts' expectations for $1.61 per share.

Performance among Disney's various segments was mixed. Media networks, which includes television programming, ESPN, and cable networks, saw revenue of $6.24 billion, which was flat compared to the prior-year quarter. The standout performer was the parks and resorts segment, which generated sales of $5.15 billion, up 13% year over year. Studio entertainment produced revenue of $2.5 billion, which declined 1% year over year. Sales of consumer products and interactive media declined to $617 million, down 4% compared to the prior-year quarter.

Paris, Fox, streaming, and much more

There were several interesting things of note that were revealed by company executives during the conference call to discuss the financial results. In mid-2017, Disney regained control of Disneyland Paris, which had a troubled history since it debuted in 1992. Disney executives noted that the theme park, which is located 19 miles east of Paris, had achieved a record first quarter during its 25th anniversary celebration and had been profitable now for the last three quarters.

CEO Bob Iger gave a brief update on the proposed acquisition of Twenty-First Century Fox. He stated that the regulatory approval process had begun in numerous jurisdictions around the world. He also said he had spent the last several weeks meeting with a number of executives at Fox gaining insight into the company. "After these discussions, I'm even more enthusiastic about the businesses we're acquiring, and the management teams that are leading them," Iger said.

Iger also provided additional information regarding the ESPN streaming business that is set to launch later this year. He said the company would first release a "completely reconceived and redesigned ESPN app." He indicated the "changes will be dramatic" and include an "easy, intuitive interface." The app will provide a significant amount of personalization, using machine learning to provide "specific relevant content" to each individual user. The app will deliver scores and highlights, podcasts, and will access the live streams to all ESPN's networks for its cable subscribers.

It will also provide access to the long-awaited ESPN Plus subscription service, powered by BAMTech, which will offer subscribers "a greatly expanded array of programming," providing thousands of additional live events that won't be available on the main ESPN channel. The over-the-top service will also offer the entire library of ESPN-produced films, including the highly regarded 30 for 30 series of sports documentaries. The subscription service will be available to consumers for $4.99 per month.

Disney also revealed that David Benioff and D.B. Weiss, the creators of the highly successful Game of Thrones program, had been tapped to produce a new series of Star Wars movies that would provide a separate storyline from the Skywalker saga. Executives didn't reveal much about the new series of films, except to say it would be "focused on a point in time in the Star Wars mythology."

Disney continues to defy detractors, who have placed undue reliance on the company's declining cable business. Cable subscribers fell 3% year over year, but the trend revealed a "modest sequential improvement" for the second consecutive quarter. During the call, executives noted that the upcoming streaming services have "implications beyond domestic consumption and domestic distribution platforms."

Much of what was covered confirmed the thesis held by longtime investors: Disney has the intellectual property, the marketing machine, and a long history of adapting to changing circumstances. This time will likely be no different. Stay tuned.