Please ensure Javascript is enabled for purposes of website accessibility
Log In Help Join The Motley Fool
Free Article Join Over 1 Million Premium Members And Get More In-Depth Stock Guidance and Research
By Brian Stoffel - Feb 13, 2018 at 8:16AM

Imagine a company that could take a cut on over half of all retail purchases.

Over the past twelve reportable months, that's how much Americans have spent on retail purchases. Imagine if one company could skim a little bit off of every one of those purchases by offering a way to make the whole process of retail easier.

Something as low as a 2% cut on that enormous sum would still yield $100 billion in revenue. 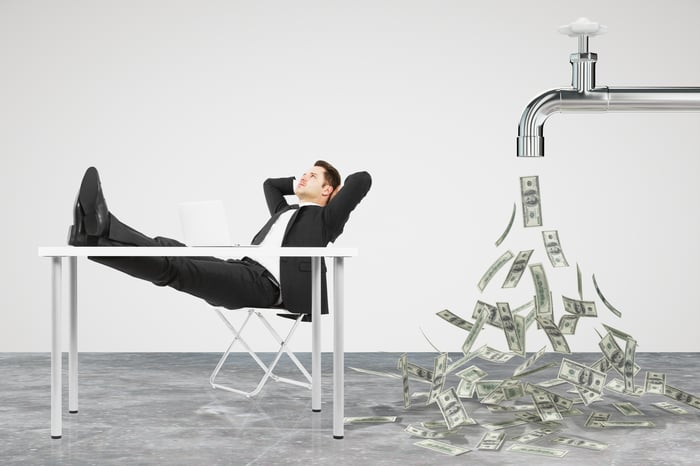 Increasingly, that's what I'm coming to believe is in the cards for Amazon (AMZN -5.14%), and it's why if I could only choose one stock to own this would be it.

A moat wider than many think

As recently as 18 months ago, I identified Alphabet as the "one stock" I would own if I could only choose one. Then I came upon Ben Thompson's brilliant Stratechery blog, which has both free and subscription content. After a stint at Microsoft, Thompson now blogs on everything tech-related.

For the longest time, I believed the two most compelling aspects of Amazon were pretty simple to understand:

But Thompson's work has convinced me there's even more to the story: while the moat of fulfillment centers is still important, and Amazon's compass will still be guided by that same mission, the effect for investors is simple to understand: there will be an Amazon Tax on a huge portion of spending, both domestically and abroad.

To understand how this might come to fruition, there are some simple mechanics to digest. Amazon's core business has been -- and will probably remain -- being The Everything Store, a place you can go to purchase anything.

But over time -- as far as investors are concerned-- it is the tools that Amazon builds to help The Everything Store accomplish its mission that will really turbo-charge results.

But over time, it became clear no one else had the same scale as Amazon. And if the company allowed third-party merchants to list their wares on Amazon and pay for the company to take care of all fulfillment services -- storing, packing, and delivering them to customers -- then Amazon would be getting paid for a service it was already having to perform for its own core business. Thus was born Fulfillment by Amazon (FBA) -- which is thriving.

The Amazon Tax -- extended to AWS

Let's use Amazon Web Services (AWS) -- the company's cloud platform -- as a further example. When Amazon started growing at the turn of the Millennium, the company was constrained by having to funnel all IT projects through a single department. Making the tools of AWS available to everyone in the company was the solution. It de-bottle-necked IT at Amazon.

Not just anyone could undertake such an expensive project. Amazon, however, could justify spending billions -- it helped make Amazon.com run smoother. But those same investments also became a play outside of Amazon: by offering up the platform for anyone else to use, the company turned something it had initially built for itself into a money-making machine that others could use.

Keep in mind that sales from AWS have never surpassed 10% of all company sales. And yet, because of the high-margin nature of the service -- because of scale -- it is helping to fund all other initiatives.

Amazon may have started as..."The Everything Store," but its future is to be a tax collector for a whole host of industries that benefit from the economies of scale.

It won't end with FBA or AWS. Remember, the company's guiding principle is to be the most customer-centric company the earth has ever seen. Already, we have hints about the next industries to be disrupted:

I wrote "the parent company" because there's a key dynamic at play throughout: Amazon can justify spending so much on fulfillment centers, and AWS, and delivery, and healthcare, because, as Thompson writes, the "first and best customer" of each one of these solutions is Amazon's e-commerce business. 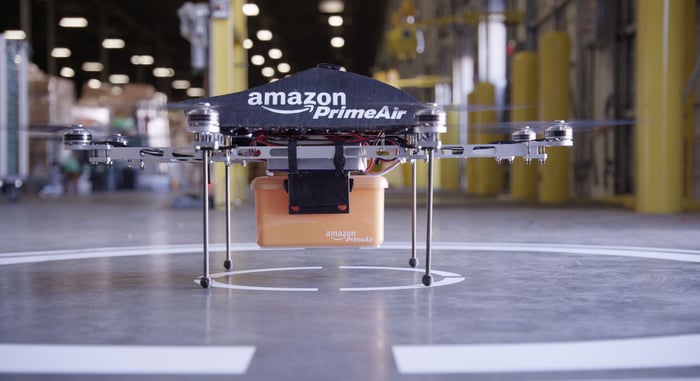 Delivery makes sense because the e-commerce division needs to deliver packages. But why not take that solution and scale it out indefinitely so others can benefit -- and you get a cut of the transactions -- as well?

Healthcare makes sense because Amazon employs 566,000 people. When you include the families covered under these plans, that could amount to healthcare for over one million people. If Amazon can build out a system to lower costs, that helps Amazon. And if it can offer that same solution to the rest of the country -- and take a cut -- all the better.

In the end, Amazon has simply reached a scale where it can continue to develop more and more solutions for its internal needs, and then offer those solutions to the rest of the world once they're perfect. Few companies have the same scale and experience to risk such ventures. That's an advantage I want a piece of, and it helps explain why I'm comfortable with Amazon making up over 20% of my real-life holdings.