Better sales than investors expected, and plans to further cut costs to drive up profits, have ignited the market today.

In short, Under Armour delivered a fourth quarter that exceeded most investors' expectations, particularly with sales. The consensus among Wall Street analysts who cover the company was for $1.33 billion in sales, and Under Armour delivered $1.37 billion, a solid beat that was 5% higher than the year-ago quarter.

On the earnings side, the company reported a net loss of $88 million, which was in part because of one-time charges related to the Tax Act, the new legislation passed by Congress in late 2017. Adjusted for this and other nonrecurring expenses, Under Armour's adjusted net loss in the quarter was $1 million. This result was in line with what Wall Street was expecting. 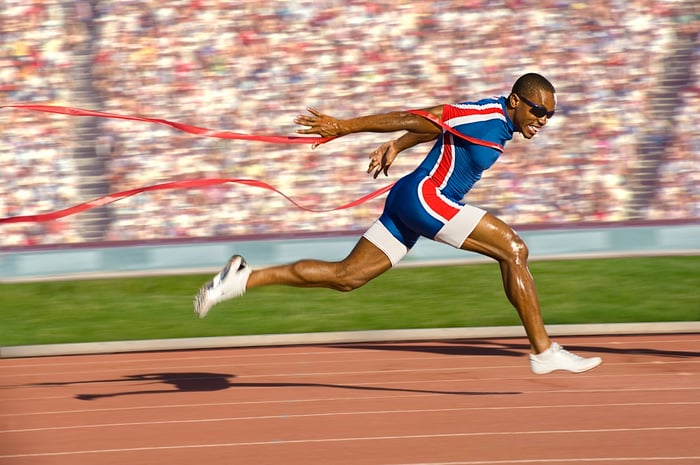 In short, the market is quite pleased to see that Under Armour's sales are growing again, after a third quarter that marked the first quarterly sales decline for the company in a very long time, with revenue down almost 5%. The return to growth was driven by two key things: international sales and strong direct-to-consumer revenues.

On the international side, sales surged by 47% (43% higher adjusted for currency changes), and made up 23% of total revenue. North American sales declined 4% in the quarter, largely on continued weakness in Under Armour's sales through its retail partners. On a consolidated basis, wholesale revenue fell 1% in the quarter, while direct-to-consumer increased 11%. But even within the weakness in wholesale, there was improvement: The 1% quarterly decline is a steady reversal from bigger declines most of the year. The company finished 2017 with wholesale revenues down 3%.

Under Armour also finished up 2017 with $124 million in restructuring and impairment charges, below the $140 million to $150 million management had originally forecast. Management has also identified further restructuring opportunities it says will deliver at least $75 million in annual savings, though they will cost the company $110 million to $130 million in charges in 2018. The majority of these -- up to $105 million -- will be cash charges to terminate leases and contracts. When adjusting for the impact of these nonrecurring items, management expects adjusted operating income of between $130 million and $160 million in 2018.

Management said that 2017 was a transitional year for Under Armour, and it's looking like 2018 is going to be more of the same as the company gets its operating structure under better control. Guidance for 2018 is for gross margin of 45.5%, 50 basis points above 2017, while the company also expects to generate $20 million to $30 million in positive operating income after reporting an operating loss in 2017. This is expected to come from "low single-digit" revenue growth, from the $5 billion in sales the company reported last year.

Growth will continue to be fueled by international sales. Last quarter, international sales were 23% of the company's total; that's a 39% increase from 16.5% of sales, year over year. That's a big reminder that the international market still makes up a relatively small part of Under Armour's total sales. At the same time, direct-to-consumer sales are becoming more important to the company. Direct sales made up 42% of the total in the fourth quarter and 35% for the full year, up from 31% in 2017 and 30% in 2016.

Looking ahead, 2018 is on track to be a lot like 2017 for Under Armour on both the top and bottom lines, but it's evident -- at least based on the big reversal in the stock price -- that investors are starting to buy into the company's plans to right the ship. A return to sales growth certainly has helped in that regard, while plans to further reduce overhead and focus on profitable growth for the long term are also good to see.

Under Armour is likely to remain a turbulent stock to own, but long-term investors willing to ride it out could do very well if the company's business results continue to trend in the right direction.