Please ensure Javascript is enabled for purposes of website accessibility
Log In Help Join The Motley Fool
Free Article Join Over 1 Million Premium Members And Get More In-Depth Stock Guidance and Research
By Keith Speights - Feb 14, 2018 at 6:33AM

What kind of stocks can you keep for 10 years or more? Great businesses with great products and continual innovation.

Warren Buffett once said, "If you aren't willing to own a stock for 10 years, don't even think about owning it for 10 minutes. Put together a portfolio of companies whose aggregate earnings march upward over the years, and so also will the portfolio's market value." As is usually the case, Buffett was right.

There are plenty of stocks that should generate earnings that "march upward over the years" like Buffett described. I think AbbVie (ABBV -1.98%), NVIDIA (NVDA 2.12%), and The Walt Disney Company (DIS -1.50%) fit in that group and especially stand out as three of the top stocks you can buy and hold for the next decade. 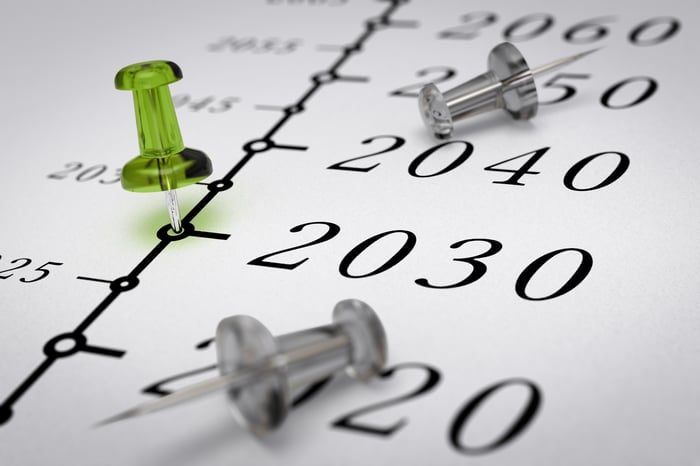 I view AbbVie as the best big pharma stock on the market right now. It's certainly been the best over the last three years, with the highest total shareholder return and highest growth in adjusted earnings per share in the industry. AbbVie has a good shot at keeping its No. 1 spot for a while.

The biggest driver of AbbVie's past success is Humira, the top-selling drug in the world for several years running. AbbVie thinks that Humira will rake in close to $21 billion in annual sales by 2021. And while the autoimmune disease drug will face biosimilar competition in the U.S. in 2023 (and in Europe later this year), Humira is likely to continue generating plenty of revenue for AbbVie well into the next decade.

However, the more important catalysts for growth in the future will come from elsewhere. At the top of the list is cancer drug Imbruvica. New hepatitis C drug Mavyret seems destined to become AbbVie's next blockbuster. The company also claims multiple promising pipeline candidates, led by cancer drug Rova-T and autoimmune disease drug upadacitinib. Overall, AbbVie expects to launch at least 20 new products or indications by 2020.

While AbbVie's earnings growth from these drugs seem likely to push the stock higher, there's also another reason behind the company's tremendous total shareholder return of more than 270% over the last five years: its dividend. AbbVie's dividend currently yields 2.55%. The big pharma company has increased its dividend by nearly 78% since being spun off from parent Abbott Labs in 2013.

I think that NVIDIA will be a top stock in 2018. But I also like the graphics chipmaker's prospects over the next decade also. There are several trends working in NVIDIA's favor.

NVIDIA's core market, gaming, continues to grow by leaps and bounds. I don't see that slowing down, especially as virtual reality games increase in popularity. Gaming still contributes well over half of the company's total revenue, but that could change down the road.

NVIDIA's technology should also be critical for a specialized application of AI that holds the potential to be huge: self-driving cars. Hundreds of transportation companies are already using the NVIDIA Drive platform, which combines deep learning, sensor fusion, and surround vision for self-driving vehicles.

There are plenty of reasons to like Walt Disney for the next decade as well. Let's start with its theme parks business. Disney's theme parks are more important to its bottom line than ever before. And the parks are performing really well, with 21% year-over-year operating income growth in the fourth quarter of 2017.

The company's studio entertainment segment also seems likely to do well for years to come. Disney owns several of the most lucrative movie franchises around, including Marvel superhero movies such as the Avengers and the Star Wars movies.

Also, Disney hopes to finalize its planned merger with Twenty-First Century Fox. The deal would add a large number of movies to Disney's content lineup, notably including the Avatar, Planet of the Apes, and X-Men movie franchises.

One area that has been challenging for Disney recently, though, is its media networks segment. The effects of cord-cutting have taken a toll on the segment's revenue. However, Disney is rolling out its own streaming services, including a new ESPN subscription service that will launch this spring at a low cost of $4.99 per month.

10 years is just a start

While Warren Buffett said that investors shouldn't own a stock for 10 minutes if they're not willing to own it for 10 years, he certainly didn't set a maximum on buying and holding. Buffett prefers to keep stocks for even longer periods of time.

I think that AbbVie, NVIDIA, and Disney are the kinds of stocks that you can buy and hold for the next decade because they're well-run companies with great products and continual innovation. But in my view, owning these three stocks for 10 years is just a start.