Ford Motor Company (F 2.95%) said its sales in Europe rose 1.8% in January from a good year-ago result, buoyed by strong demand for its all-new Fiesta and the Kuga crossover SUV.

But Ford's sales gain lagged both the overall market and some key rivals', raising questions about Ford's product strategy that echo those raised in other parts of the world.

Ford sold about 109,600 vehicles in January in the 20 Western and Central European markets that it considers its primary marketplace in Europe (the "Euro 20," to use Ford's term). That was up 1.8%, or about 1,900 vehicles, from its total in January of 2017. Because Ford's gain lagged the overall market's 6.4% increase, its market share in the Euro 20 dropped by 0.4 percentage points from a year ago, to 7.6% for the month.

In Europe as a whole, including Russia, Turkey, the former Soviet republics, and the countries of Eastern Europe (what Ford refers to as the "Euro 50"), Ford sold about 119,000 vehicles in January, up about 1,700 from a year ago. The little Fiesta is Ford's biggest seller in Europe. Powered by demand for an all-new model, the Fiesta had its best January since 2011 last month. Image source: Ford Motor Company.

Although most of the vehicles Ford sells in Europe would be familiar to Americans, Europe's auto market is a very different place. The biggest difference: Tight city streets and high taxes on gasoline and diesel fuel mean Europeans favor smaller vehicles.

Given that, it's no surprise that Ford's top three best-sellers in Europe are all on the small side. Sales of each rose in January.

Data source: Ford Motor Company. Sales totals are for the Euro 20 region and are rounded to the nearest 100 vehicles.

The subcompact Fiesta is far and away Ford's best-seller in the Old World. The European Fiesta is all-new, launched last year. Demand for the new Fiesta has been brisk -- but supplies were tight for much of 2017 as Ford worked to ramp up its production line. That situation appears to have eased in January, but it's possible Fiesta sales could rise further in coming months as more cars reach dealers.

Despite a preference for small vehicles, more European car-buyers -- like their counterparts in the U.S. and China -- have been choosing SUVs in the last couple of years. Sales of the Kuga, the European version of Ford's Escape, have surged since the model was given an overhaul last year. Overall, Ford's SUV sales rose 6% in the Euro 20 last month.

In a booming market segment, Ford is mostly missing out

As you'd expect from the above, small SUVs (one size from the Kuga/Escape) are white-hot in Europe. Subcompact crossover SUVs like the Opel Mokka, a near twin of General Motors' (GM 2.20%) Buick Encore, and Renault's (RNSDF -0.98%) sleek Captur have done very well -- but for all of its success with larger SUVs, Ford has struggled to crack this segment. (The same thing is true in both the U.S. and China.) 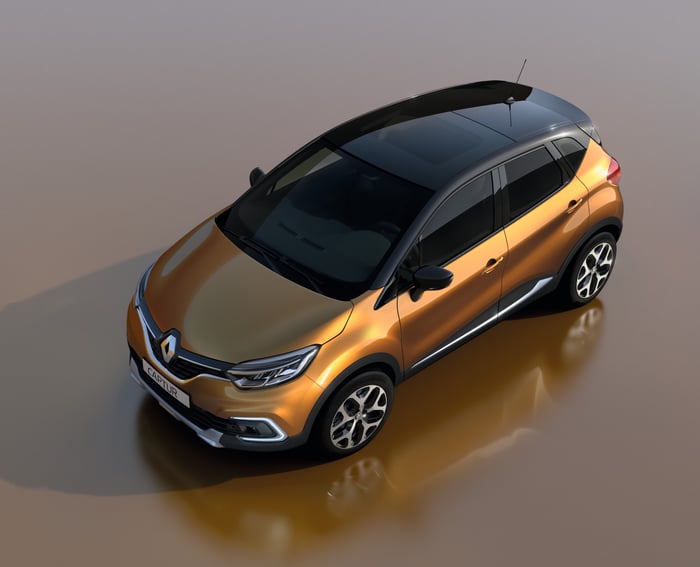 Ford's subcompact SUV entry is the little Ecosport, a Fiesta-based crossover SUV that was originally developed for emerging markets like India. But Ford sold just 3,900 Ecosports in the Euro 20 last month, down 22% from a year ago.

Ford has been trying to sell Ecosports in Europe for a few years now, with very limited success. At first, the Ecosport was held back by its rough edges. Despite being spiffed up somewhat for Europe, its emerging-market roots were easy to discern next to the plush Mokka and other rivals. 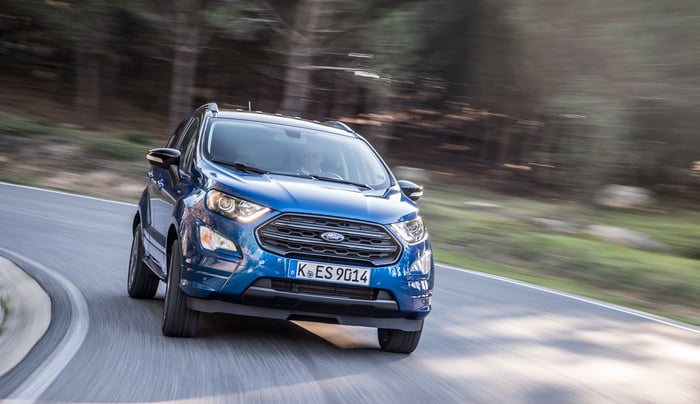 Ford just gave the Ecosport a major overhaul in an effort to make it more competitive with rivals like the Captur. Image source: Ford Motor Company.

Ford has responded by re-revamping the Ecosport for Europe (and the U.S.); that version is making its way to dealers now. Watch to see if sales start rising as the year goes on.

The upshot: What Ford Europe needs

Ford's profit in Europe dropped sharply in 2017. There were some macroeconomic factors at work, but the costs of launching the new Fiesta made a significant dent. That won't be a factor in 2018, of course, but sales of several other Ford models are suffering because they're due (or in a few cases, overdue) for replacement as well.

Ford can fix that, and it will: The company plans to launch 21 "new or refreshed" products in Europe this year, including an all-new Focus. The costs of those launches could weigh on Ford's profits again this year, but on the flip side, the new models should help Ford make up any lost sales ground.