IPG crushed on earnings Friday morning. So why in heaven's name is its stock down?

Sometimes, life just doesn't seem fair. For investors in fiber laser-maker IPG Photonics (IPGP 2.49%), Friday was one of those times.

Releasing its Q4 and full-year 2017 results Friday morning, IPG reported that its sales surged 29% in Q4 to $361.1 million, and operating profits soared 41% to $148.3 million. True, profits per diluted share declined a steep 31%, but that was mainly because IPG recorded $0.90 in true one-time charges due to the effects of tax reform that were entirely out of its control.

On a non-GAAP, "adjusted earnings" basis, IPG Photonics said it would have earned $1.86 per share last quarter without the effects of tax reform, a number that easily beat Wall Street's expectation of $1.72 per share in pro forma profits. Sales likewise exceeded expectations. So why is the stock down 10.6% as of 11 a.m. EST? 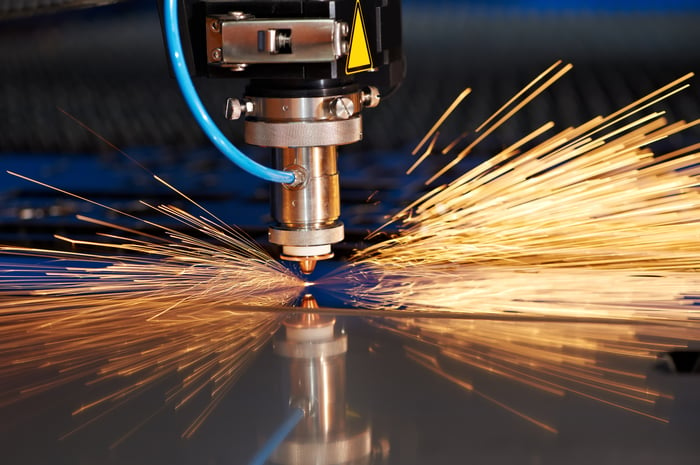 Laser maker IPG Photonics was red hot and right on target this morning -- but its stock got burned. Image source: Getty Images.

IPG CEO Dr. Valentin Gapontsev summed up the quarter thusly: "We capped off one of the strongest growth years in IPG's history with a record fourth quarter, driven by accelerating adoption of our high-power fiber lasers across our largest applications and geographies."

Speaking of tax reform, that one-time charge to earnings won't repeat in 2018. As a result, by artificially depressing earnings in 2017, it sets up IPG for strong earnings growth off a lower base in 2018.

With "solid" growth in backlog enabling IPG to maintain a book-to-bill ratio of 1.0 in Q4, management sees no reason IPG cannot grow revenue an additional 15% to 24% in Q1 2018. This implies revenue of $330 million to $355 million, ahead of Wall Street's expected $331 million. IPG further expects to earn between $1.62 and $1.87 per share on those sales -- earnings growth of anywhere from 17% to 36%, and likewise ahead of estimates. Full-year projections for 10% to 15% sales growth are also ahead of what Wall Street is expecting.

When it's boiled down, IPG Photonics beat earnings, and it promised to keep on beating earnings through 2018. So why is the stock down? After searching through the earnings report for anything negative (and finding nothing), I can come to only one conclusion: After watching IPG Photonics more than double in price over the past year, and seeing the stock now priced at 35 times trailing earnings, investors have simply decided to "declare victory and go home." They placed their bets. They won their bets. And they're counting their winnings today.