Please ensure Javascript is enabled for purposes of website accessibility
Log In Help Join The Motley Fool
Free Article Join Over 1 Million Premium Members And Get More In-Depth Stock Guidance and Research
By Daniel B. Kline - Updated Jun 6, 2018 at 2:32PM

The company has major expansion plans.

Starbucks (SBUX -0.33%) shares fell a bit after the company reported its first-quarter earnings. That drop was likely because same-store growth in the United States only came in at 2%, and that was due to higher prices, not an increase in customers.

The numbers fueled concerns that the company has maxed out its market share and audience in its home country. That may be true for the chain's current format, but big changes are coming that will expand U.S. opportunity for the coffee chain. 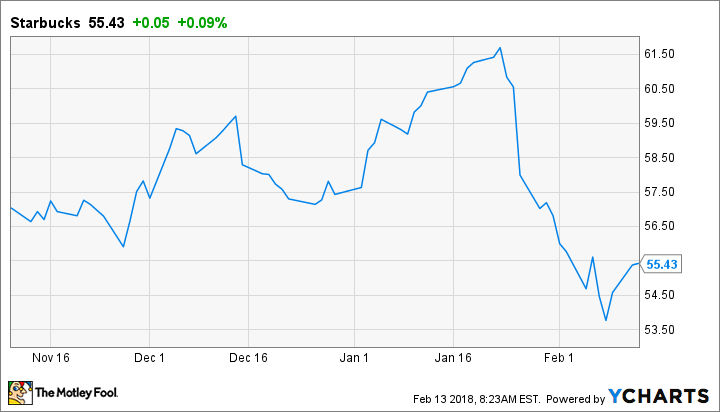 In most of the U.S., it's fair to say that the coffee chain has maxed out its opportunities for new stores. In fact, a recent report from BMO Capital Markets found that the average Starbucks location has 3.6 other Starbucks cafes within a one-mile radius.

That's certainly saturation when it comes to growing via adding new stores. Or, if you look at it another way, it's an impressive retail platform to launch new products that will drive same-store growth. Starbucks plans to do that as it rolls out its premium brand. What is Starbucks premium?

Starbucks launched its premium model with its Roastery in Seattle. That location provided the model and a testing ground for more Roasteries. Along with those Roastery locations -- essentially temples/theme parks for coffee lovers -- the company is going to open about 1,000 Reserve stores and add Reserve bars to about 20% of its locations.

Reserve locations offer a selection of higher-end products developed by the Roastery (soon to be Roasteries). It's an effort so crucial to the brand that former CEO Howard Schultz is leading the expansion effort.

"Starbucks Roasteries under design or construction in the iconic, global cities of Shanghai, New York, Tokyo, Milan, and Chicago will join our Seattle Roastery in delivering an immersive, ultra-premium, coffee-forward experience like none other anywhere in the world," said Executive Chairman Schultz in the chain's second-quarter earnings release. "Together our Roasteries, Reserve stores and Reserve bars will broaden -- and deepen -- the enduring emotional connection that exists between our customers and the Starbucks brand everywhere."

Reserve bars should drive comparable-store sales in existing locations where they are added. It's not a direct comparison, but in 2016, Roastery customers spent an average of four times what a typical customer spends in a regular store. It's unlikely Reserve bars will have the same multiple, since a visit won't be as special of an occasion as visiting a Roastery, but pricier offerings mean higher check sizes.

The Starbucks audience has shown a willingness to spend money. It changed people's behavior from either making a pot of coffee at work or buying a cheap cup in a convenience store.

As long as the Roastery and Reserve bar offerings are presented as special, people should be willing to buy them and pay more for them. Starbucks has always been good at creating excitement around a limited-time offering. It should be able to do that at its premium locations with a barista-driven experience built around higher-end coffee.

Starbucks isn't going to build thousands of new U.S. stores. There's simply no demand for that. Instead, the chain should be able leverage its existing customer base, getting it to spend more. That's a different model for growth, but it's one that should work well.