Kraft Heinz Co's (KHC 1.31%) fourth quarter of 2017 fell decidedly flat as the consumer-staples titan recorded a paltry 0.3% revenue increase and booked a 0.6% decline in organic revenue. Management was able to point to a couple of bright spots in its earnings results. Revenue in Europe, for example, jumped 9.3% over the prior-year quarter, and even though 8.4% of this performance originated from favorable foreign-currency translation, the segment still notched a percentage point of organic-revenue improvement.

Kraft Heinz's "rest of world" segment fared much better, reporting 5.2% revenue growth and organic revenue expansion of 7%. Management noted that in both segments, its "big bet innovations" have paid off lately. Examples include the successful expansion of Heinz mayonnaise across Europe, Australia, and Latin America and the launching of Planters Peanuts in China.

There's just a slight problem with this picture in that sales outside the U.S. and Canada make up only 21.5% of the company's total revenue base. During the fourth quarter, U.S. sales of $4.8 billion declined by 1% versus the comparable prior-year quarter, and Canadian sales slumped by 4.1%, to $591 million. The performance north of the border was aided by a robust Canadian dollar during the last three months -- organic revenue in Canada actually slumped by nearly 9%. 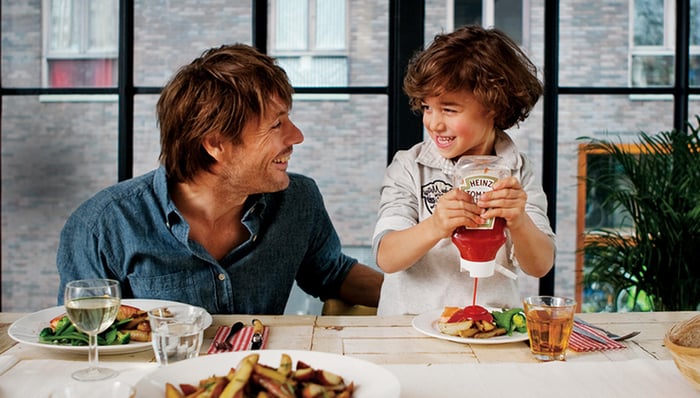 North America's outcomes are disappointing given the investment the company has poured into the continent. During the company's earnings conference call on February 16th, CEO Bernado Hees pointed out that since the merger of the Kraft and Heinz organizations in 2015, the company has expanded the dollar volume of the Heinz brand by 17% in the U.S.

This is a credible achievement that Kraft Heinz should feel justified in touting. Yet the problem of running a large conglomerate with a stable of billion-dollar brands -- and a plethora of midsized ones -- is that a handful of product lines can often squash overall momentum in any given quarter. Take the U.S., for example, where management has called out an undersupply of Ore Ida potato products coupled with softer sales of Planters peanuts in retail-club channels as first-quarter 2018 headwinds that will pressure sales.

In Canada, the company is facing more onerous issues. Management attributed results in the fourth quarter to lower coffee shipments and the "discontinuation of select cheese products." At the same time, executives told investors that while retail inventory levels had been expected to decline in the fourth quarter, they came in below expectations -- and worse, the reduced levels appear to be permanent.

This "permanent" dip means that grocers and food-club organizations are limiting some of Kraft Heinz's shelf space in Canada, most likely in favor of smaller, cleaner-label brands. As I've recently written, other consumer packaged-goods (CPG) companies, such as Campbell Soup Company, are also suddenly finding their retail spaces crimped as consumer tastes change.

This may actually be a healthy headwind for Kraft Heinz's management to grapple with. The CPG industry is undergoing a sea change as nimble brands with low barriers to entry, fueled by social-media clout, are springing up to challenge some of the biggest names in the business. As I've previously argued, it might be fruitful for acquisition-minded Kraft Heinz to avoid undertaking a larger merger transaction this year. Instead, decisively proving to shareholders that the company can optimize balance within its North America packaged foods, which run the gamut from snacks to condiments, possibly could raise the its sinking earnings multiple: 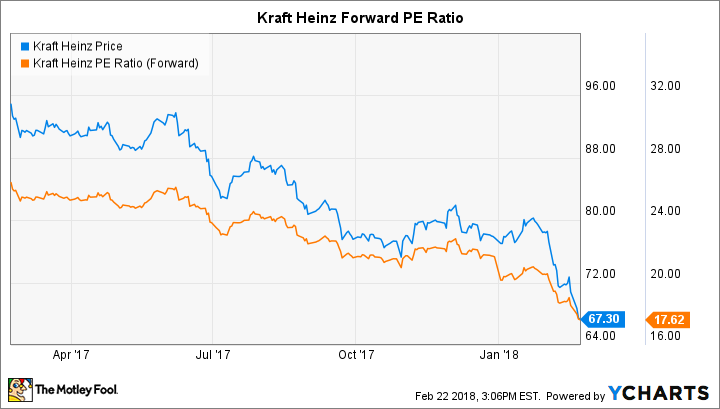 Over the last 12 months, Kraft Heinz's forward price-to-earnings (P/E) ratio has fallen below its peer group, the consumer-staples sector of the S&P 500 Index, which presently trades at a forward P/E ratio of 18, according to Yardeni Research. Global opportunities may abound for Kraft Heinz, but the best way to stabilize and lift share price may be to tackle the hard work of product reformulation in North America.

Revamping ingredients to present cleaner labels to health-conscious millennials and winning back shelf space are key strategies to jump-start growth here at home. And home, after all, is where four-fifths of total company revenue presently resides.