It's been a difficult few months for Campbell Soup Company (NYSE:CPB). Its fiscal second-quarter 2018 results, released on Feb. 16, revealed a flat top line and a decrease of 2% in organic revenue growth. Arduous negotiations with a major unnamed customer (thought to be Walmart) over reduced soup promotions continued. And the company's Campbell Fresh segment posted an operating loss, as supply chain issues and the higher cost of carrots continued to plague its Bolthouse Farms business.

Shareholders should remain cautious. I've argued recently that Campbell Soup isn't a value play at this point, and that its pending acquisition of Snyder's-Lance Inc. (NASDAQ:LNCE), to bulk up its snack presence, isn't an instant cure to its market-positioning woes. But Campbell's most recent quarter contains a few glimmers of hope for those advocates who'd like to see the company once again find momentum with consumers. 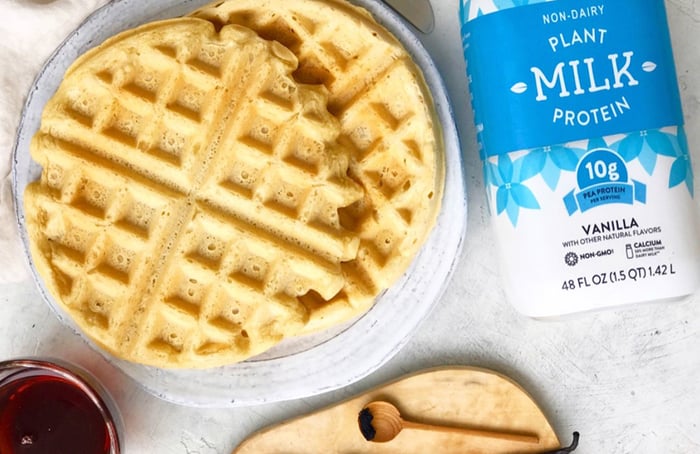 From fruit-forward to functional

Most positively, management is rethinking its approach to beverages within Campbell Fresh. In the company's earnings conference call last week, executives relayed that some of its customers (i.e., major grocery stores) have "reset" their super-premium juice categories, reducing available shelf space.

This is a potential blow to Bolthouse Farms, which has deep investment in this category through its line of fruit-intense beverages like "100% Pomegranate," "Blue Goodness," and "Acai + 10 Superblend." Millennial consumers, who have already frowned upon carbonated sodas, are beginning to ditch high-sugar-content beverages of every stripe -- even all-natural drinks that derive sugar primarily from fruit.

Thus, Campbell announced last week that it's responding by introducing more functional beverages (i.e., geared to specific health benefits), within a wave of 19 beverage products. Many of these fall within a new label, "Bolthouse Farms B." In describing the competitive advantages of this line during the company's earnings call, CEO Denise Morrison cited the examples of "B Strong," a protein drink which claims to have 70% less sugar than competing brands, and "B Balanced," a smoothie beverage which claims to contain 50% less sugar than competitor labels. Campbell is also adding variants this year to its successful "plant protein" milk beverage. This newer but rising beverage category has drawn the interest of no less than The Coca-Cola Company (NYSE:KO), which acquired its own plant-derived beverage company, Latin America-based AdeS, last year. 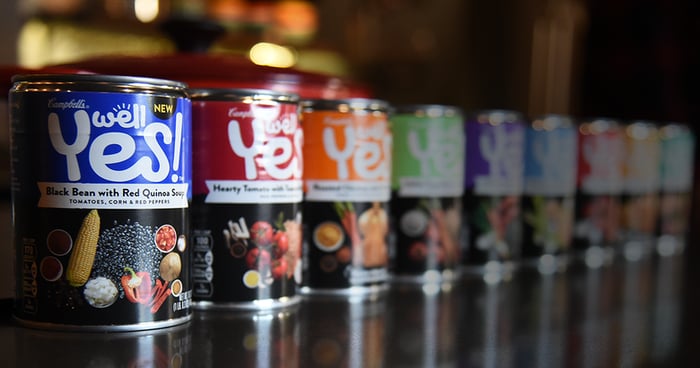 As for its eponymous soup business, Campbell will likely struggle with decreasing shelf space for its legacy soup labels in the near future, the recent acquisition of organic-soup manufacturer Pacific Foods, now completed, gives Campbell a respected brand it can scale to a wider audience. And management is signaling that the relatively new "Well Yes!" line of healthy, simple-ingredient soups is gaining traction in the market.

At a consumer analyst conference this week, Campbell presented the slide below, which illustrates 2017 pro forma revenue composition after adding in Snyder's-Lance (as well as Pacific Foods). The slide gives investors a decent idea of how the company's revenue will be broken up between various categories once the Snyder's-Lance transaction is completed later this year. 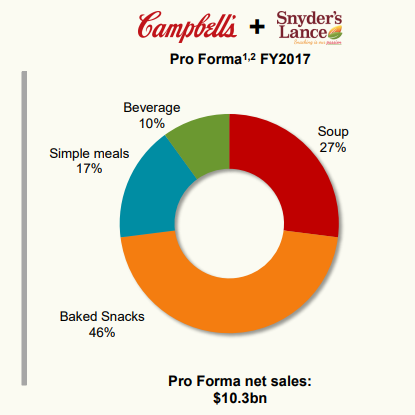 Though snacks will make up the largest revenue source at an estimated 46% of total revenue, soups and beverages won't be far behind, combining to comprise 37% of Campbell's total top line. Solving the long-term issue of updating the company's core soup and beverage portfolio -- given rapidly evolving consumer preferences -- should remain a vital corporate objective. Though the time frame to completion is indefinite, management is finally beginning to make persuasive investments to achieve progress on this unwieldy task.