Please ensure Javascript is enabled for purposes of website accessibility
Log In Help Join The Motley Fool
Free Article Join Over 1 Million Premium Members And Get More In-Depth Stock Guidance and Research
By Matthew DiLallo - Feb 23, 2018 at 11:47AM

Traffic at the Latin American airport operator lost some altitude due to some issues at its recently acquired locations.

Despite some turbulence at a couple of its airports, Grupo Aeroportuario del Sureste SAB CV (ASR 0.73%), or ASUR, reported a solid finish to 2017, which was a transformational year for the Latin American airport operator. The company's earnings took off after it boosted its stake in a joint venture that operates a major airport in Puerto Rico and bought a company that operates several more in Colombia. 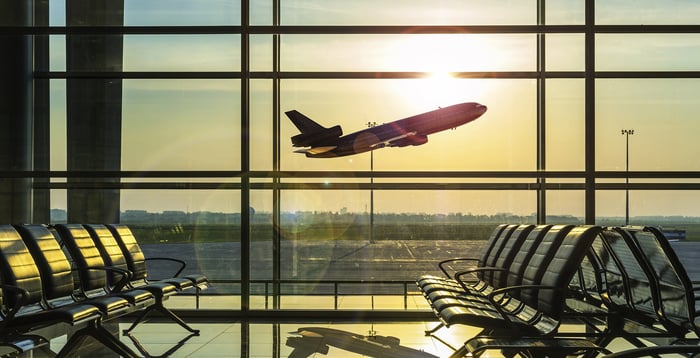 The new additions were the main story:

ASUR recently began operations at the newly constructed terminal 4 in its Cancun airport. The new terminal will have the capacity to handle 9 million passengers, significantly increasing the space of an airport that already handled 23.6 million passengers last year. That expanded space will enable Cancun to continue growing revenue from the increased traffic as well as the 64 new commercial spaces now open.

In October, the company closed the acquisition of a majority stake in Airplan, which operates six airports in Colombia. That deal, as well as the increased stake in the San Juan airport, should help drive earnings growth in the next year.

It's also worth noting that ASUR had a deal in place to acquire a majority stake in Oriente, which operates several airports in Colombia. That acquisition has yet to close, and as of its last update in October, ASUR was still waiting for regulatory approval and was negotiating with the sellers to adjust the acquisition terms due to the delay. If this deal is closed, it will provide a further boost to earnings in the coming year.