Please ensure Javascript is enabled for purposes of website accessibility
Log In Help Join The Motley Fool
Free Article Join Over 1 Million Premium Members And Get More In-Depth Stock Guidance and Research
By Lou Whiteman - Feb 24, 2018 at 11:30AM

The company is taking steps to make sure it's involved in the winning bid in a competition that will help push military aircraft technology forward.

Boeing (BA -0.01%) earlier this month signed on to help privately held General Atomics in the competition to build the U.S. Navy's MQ-25 Stingray tanker drone, even as Boeing has its own competing design in the competition. The reasoning behind Boeing's surprising decision to hedge its bets provides some insight into the company's long-term thinking and goes well beyond one program.

Boeing, General Atomics, and Lockheed Martin (LMT 0.35%) in January all submitted bids to build what the Navy describes as an aerial refueling tanker drone, and General Atomics on Feb. 12 announced a group of partners including United Technologies, L-3 Communications, and BAE Systems, along with Boeing. Specifically, General Atomics will lean on Boeing Autonomous Systems for what was described as "aviation and autonomous experience" on its drone, which is expected to be based on its Avenger model. 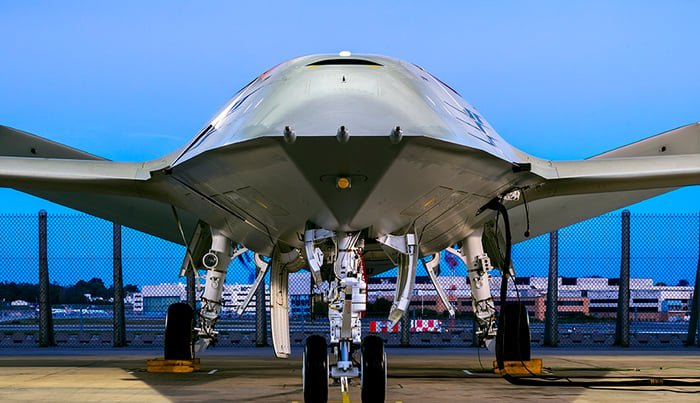 The partnership won't stop Boeing from entering its own competitor into a competition that could be worth billions depending on how many units the Navy eventually decides to order.

Despite the potential size of the contract, the Stingray would appear at first glance to be an odd one for Boeing to double down on. The Navy appears in no rush to get the eventual winner into production, projecting just four MQ-25 deliveries by fiscal 2023 in its recently released budget projections, and the Pentagon has made no firm commitment to buy the full 72 aircraft initially envisioned.

Further, the government has seemed uncertain at times about what it needs the Stringray to do, and whether the drone would be primarily just for refueling or also be used for surveillance and intelligence gathering. With all the uncertainty, Northrop Grumman, which was initially viewed as one of the favorites in the competition, last October went the opposite direction from Boeing and dropped out of the competition.

More than just a drone

For Boeing, participation in the MQ-25 program seems to be about a lot more than selling a few drones. It's an incumbent manufacturer in a sector where new technologies threaten to disrupt the status quo, making sure it has a seat at the table for whatever comes next.

Boeing has a lot to offer whoever the eventual winner is, given its leading role as a provider of Air Force refueling tankers and its generations of experience working with catapult launch and recovery systems on aircraft carriers.

But ever since the company's X-32 design lost out to Lockheed Martin's F-35 in the joint strike fighter competition, Boeing has been at least at somewhat of a disadvantage when it comes to next-generation flying technology development. Lockheed has invested millions of dollars and countless hours in trials and development to get the F-35 up to snuff that Boeing would have benefited from had the X-32 been selected instead.

By attempting to ensure its participation in an ambitious drone project, and in particular one that needs to marry manned and unmanned aircraft in ways that figure to become more common in the future, Boeing figures to gain valuable experience when preparing for future competitions.

Bofore the partnership, Boeing was at risk of being left on the outside yet again. As fellow Fool Rich Smith noted in January, many watchers give the General Atomics offering the upper hand in the Stingray competition because of its expected cost advantages and the previous success of its designs.

In partnering with General Atomics, Boeing is offering its expertise to the potential eventual winner. That's a gesture the Pentagon would surely appreciate. If it ensures Boeing a seat at the table for a next-gen aircraft, all the better for the company.