Please ensure Javascript is enabled for purposes of website accessibility
Log In Help Join The Motley Fool
Free Article Join Over 1 Million Premium Members And Get More In-Depth Stock Guidance and Research
By Rich Smith - Feb 25, 2018 at 8:18AM

SpaceX's plan is to go big, not stay home.

When SpaceX launched the world's biggest rocket ship on Feb. 6, that kind of seemed like a big deal -- but not everyone is impressed.

Previewing the SpaceX Falcon Heavy launch, The Wall Street Journal  seemed perplexed. Yes, the Falcon Heavy is big, admitted the Journal. But as a "heavy-lift booster," it said, it is a product designed to serve a market that's suffering "significantly eroded commercial demand" and "uncertain commercial prospects."

The problem, as the Journal (correctly) pointed out, is that thanks to advances in rocketry, electronics, and materials technology, "both national security and corporate satellites continue to get smaller and lighter" (and cheaper). 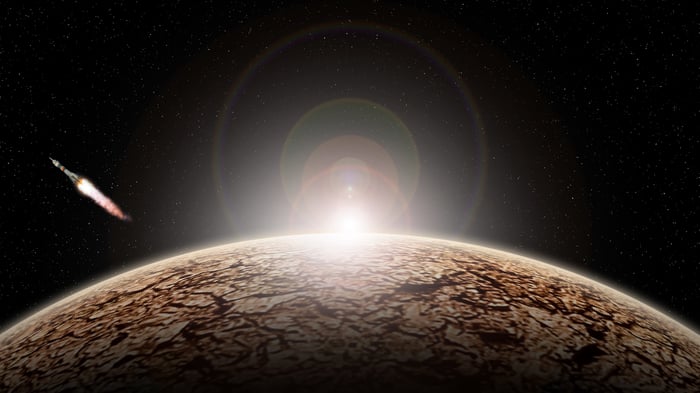 Falcon Heavy is big, but it's not quite big enough to land astronauts on Mars -- and that's what Elon Musk really wants to do. Image source: Getty Images.

That's good news for small rocket-launching start-ups like Vector Launch, Virgin Orbit, and Rocket Lab (which recently launched its first satellite into orbit). They hope to capitalize on burgeoning demand for cheap, on-demand access to orbit. But as the market for satellite launch moves toward satellites whose mass in measured in kilograms, not tons, it appears to make SpaceX's Falcon Heavy launcher -- which aims to put 70 tons of cargo in low Earth orbit in one go -- a solution in search of a problem.

Citing SpaceX's own launch manifest, the Journal points out that the company has only four contracts signed that call for the heavy lifting capabilities of the Falcon Heavy. That's versus dozens of launches slated to fly aboard SpaceX's Falcon 9. SpaceX's ultra-low prices for space launch have made its Falcon 9 incredibly popular among commercial satellite launchers. But there just doesn't seem to be a lot of demand for an even bigger launcher like the Falcon Heavy.

And that's just fine. You see, on the one hand, Musk isn't really competing in small satellite launches. Instead, he seems OK with allowing companies like Virgin Orbit, Rocket Lab, and Vector (itself founded by one of Musk's original partners at SpaceX) to capture that market.

Musk, in contrast, has his sights set firmly on colonizing Mars, a planet months away from Earth under even the most optimistic scenario -- too far for astronauts to reach in a tiny space capsule such as the Falcon Heavy could carry. To make a Mars mission viable, you either need (1) a really big rocket ship taking off from Earth to Mars, or alternatively (or even additionally) (2) a really big rocket that can shuttle multiple spaceship parts into Earth orbit, assemble them there, and then fuel and crew that spaceship to depart for Mars.

Either way, you want to build the biggest rocket ship possible. And that's why, after building and flying the Falcon Heavy earlier this month, Musk mused that what is now the world's biggest rocket ship was actually still "a bit small " for his purposes.

To make his Mars dreams a reality, Musk believes he will need an even larger rocket ship, the vessel he now calls the BFR. At almost 350 feet tall and weighing 4,400 tons, the BFR will probably comprise two main parts: a 190-foot-tall, 3,200-ton first-stage booster section; and a 157-foot-tall, 30 feet in diameter, 1,200-ton spaceship on top of it. That's big enough to cram in some really sizable spaceship parts for assembly in orbit. Alternatively, the BFR would be big enough to transport a team of colonists all the way to Mars in relative comfort, all on its own.

Musk wants the to be big enough that it can tackle just about every big mission you can throw at it -- sending astronauts to the Moon or Mars, gigantic-spaceship-construction in orbit, fueling those gigantic spacecraft, and even transporting cargo (and people) around between continents on Earth.

The BFR could, by the way, also carry supermassive satellites into Earth orbit -- just like the Falcon Heavy, but more so -- if predictions of the market shifting to all small satellites, all the time, don't pan out. But if they do, that should be fine with Elon Musk. Other companies can handle the small stuff, while he focuses on the big problem of designing really big rocket ships for interplanetary spaceflight.

This does, however, leave us as investors with the question of what to make of Boeing (BA 2.28%), Lockheed Martin (LMT 0.83%), Orbital ATK, Aerojet Rocketdyne -- anyone and everyone in the publicly traded space universe, that is to say -- which are working so hard on building a Space Launch System (SLS) for NASA? Until the SLS gets built and tested, SpaceX's Falcon Heavy will remain the biggest rocket ship on Earth -- and cheaper pound-for-pound-to-orbit, to boot. If economics have anything to say about it, the Falcon Heavy should capture the bulk of whatever large satellite launch contracts there are to be had.

On top of that, with the Falcon Heavy flight-tested, SpaceX is moving right ahead to building the BFR, which will be even bigger than the SLS, and presumably even cheaper to operate as well. If Musk and SpaceX succeed with their latest audacious plan, it's entirely possible that when the BFR gets built, it won't make just the Falcon Heavy redundant, but the SLS as well. And what will Boeing, Lockheed, and all the rest of them do then?

I don't know the answer to that. Maybe, with luck, Musk will be so busy thinking about Mars and other planets by then that he will find simple low Earth orbit launch missions (literally) beneath him, and the competition there will get a chance to catch its breath. Maybe not.

What I do know is that I wouldn't be investing in Boeing and Lockheed based on their space business right now -- because I see a very real risk that that is going away.