You already know these companies -- and you can buy them for a song right now.

Tech stocks have seen some huge gains over the past year -- the Nasdaq 100 Technology Sector is up about 30% over the past 12 months. Even among these gains, there are still a handful of technology companies that investors can snatch up at discount prices.

What's even more surprising is that some of these companies have been pillars of the technology industry for decades. Intel Corporation (INTC 0.17%), Qualcomm (QCOM -2.08%), and International Business Machines (IBM 0.14%) are all trading at lower multiples than many of their tech counterparts right now. Let's take a closer look at why each company is trading at a discount. 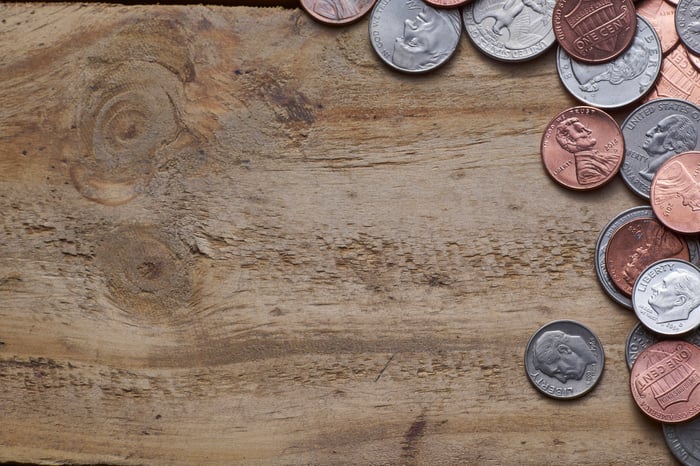 Chipzilla is in the middle of a huge transition

Investors looking for a tech bargain can have Intel's shares for just 12 times the company's forward earnings -- far below the tech industry average of about 25 times earnings.

After initially missing the mobile market, Intel has now started gaining more design wins in mobile devices (including the iPhone) and has turned much of its attention to the growing cloud computing market, which will be worth $411 billion by 2020. Intel is still the premier supplier of chips for servers -- with about 98% market share right now -- and that should help the company benefit from the burgeoning cloud computing market. Sales from its data center segment account for about 30% of the company's top line, so any gains in this space should have a significant impact on the company.

Intel is also looking to the future of semi-autonomous transportation and views the automotive market as one of its next big chip opportunities. The company bought one of the leading advanced driver assistance system (ADAS) companies, Mobileye, last year and is partnering with other driverless car leaders like Alphabet's Waymo to get its processors into more vehicles. Intel believes autonomous transportation will create a $7 trillion passenger economy by 2050, and its work with Waymo and driverless car leaders such as Aptiv are giving the company a nice inroad into the market.

For a long time, Qualcomm was not only a leader in mobile processors, but also had a very strong wireless chip patent business. Unfortunately for Qualcomm, both of those key business have taken a hit over the past couple of years. Qualcomm's shares are up just 11% over the past year -- compared the S&P 500's gains of 15% -- and its stock trades at just 16 times the company's forward earnings.

Qualcomm's patent business has been under attack by many of the same companies it's done business with for years, including key customers Apple (AAPL -2.33%) and Samsung. Both companies -- and a host of others -- have sued Qualcomm for charging too much for 3G and 4G patent licenses.

To make matters worse, Apple has started to move away from Qualcomm's high-end modem chips for its iPhone, and there are reports that Apple might drop Qualcomm from the iPhone completely. That's only a rumor at this point, but Apple's lawsuit against Qualcomm and its move use more of Intel's chips in its devices have left Qualcomm's future with Apple anything but certain.

If all of the above weren't bad enough, Qualcomm is also fighting off a hostile takeover bid from chip giant Broadcom (AVGO -1.30%). Qualcomm's board rejected the $121 billion offer, but Broadcom is still pursuing the company and trying to get shareholders to vote out a majority of Qualcomm's board so that the deal can eventually go through. Needless to say, this mobile tech giant's bargain share price comes with a lot of uncertainty.

IBM's big bet on the cloud and AI

Like Intel and Qualcomm, IBM is inexpensive right now because the tech stalwart is in the middle of major transition. Shares of IBM trade at just 11 times the company's forward earnings, in part because IBM's revenue fell for 22 consecutive quarters (it finally reversed that trend in the most recent quarter)

The company is looking to its Watson artificial intelligence (AI) services and to cloud computing to help turn things around further, and there are signs of life. IBM earned about 24% of its top line from its cloud computing segment in the fourth quarter of 2017, and cloud sales reached $17 billion for full-year 2017, up 24% year over year. IBM is one of the biggest cloud computing companies right now -- competing with Alphabet, Amazon and Microsoft -- and it's trying to grab a bigger piece of the market by offering customers its AI services.

IBM estimates that the cognitive computing market will be worth $2 trillion by 2025, and it's hoping that it can earn a chunk of that by bringing in recurring revenue from its Watson AI services. Big Blue has already made some key partnerships in the AI space, most recently expanding its partnership with Salesforce.

IBM also has a very strong dividend yield of 3.8% -- and 22 consecutive years of raising it -- that make the company's shares enticing for both bargain hunters and dividend investors. The company isn't out of the woods yet, but it's making great progress on both the AI and cloud computing fronts.

Investors should understand the risks facing each of these tech stocks. IBM, Qualcomm, and Intel were once some of the biggest innovators in the tech industry -- and are fighting their way back into that category again -- but their bargain prices are likely to come with some increased volatility as well. My biggest concern is with Qualcomm, which will likely have the hardest time emerging from its lawsuits, bouncing back from changes to its patent licensing business, and its potential takeover from Broadcom. All of those hurdles could prove too many to overcome -- and it makes the stock far less enticing even as shares are trading at what may appear to be a discount.