Please ensure Javascript is enabled for purposes of website accessibility
Log In Help Join The Motley Fool
Free Article Join Over 1 Million Premium Members And Get More In-Depth Stock Guidance and Research
By John Bromels - Feb 27, 2018 at 8:33AM

Things can't get much worse for the beleaguered industrial conglomerate...or can they?

"I've got to admit it's getting better
Getting better all the time (can't get much worse)"
-- "Getting Better," The Beatles

Of course, it's looked that way before for the company -- many, many times before. But here are two reasons to think that maybe GE's future isn't as dire as it looks. 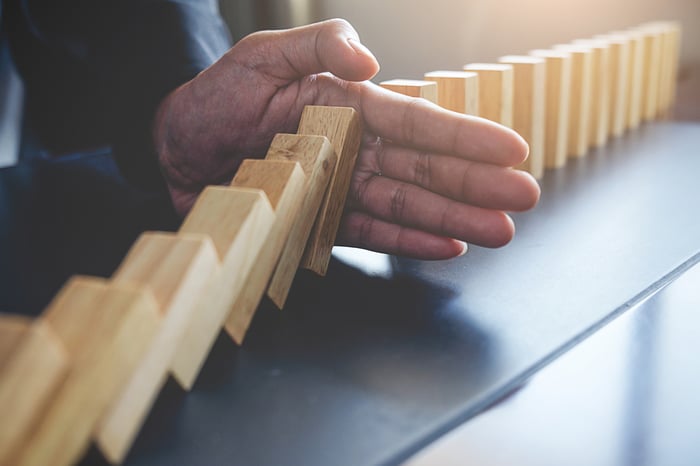 GE's stock has underperformed the market as it reels from one issue to another. Can CEO John Flannery reverse the trend? Image source: Getty Images

I've got to admit that I've been wrong before about whether GE's share price was done collapsing. When I bought the stock last year for about $28 per share -- in other words, for nearly double its current price -- I thought that the market would give new CEO John Flannery the benefit of the doubt. After the exit of former CEO Jeff Immelt, I thought that someone else -- anyone else -- in the corner office would stop the bleeding. And I wasn't the only one who thought so.

It turned out, though, that Immelt wasn't the only problem. The earnings projections he and CFO Jeffrey Bornstein -- who has also since departed -- had been putting out turned out to be overly rosy. That caused the share price to fall some more as Flannery reset expectations to more appropriate levels.

Flannery also announced moves to sell the company's jet fleet and trim other excess expenses. And then he was forced to cut the company's storied dividend. That was likened to ripping off a Band-Aid, but the market still wondered whether another shoe was going to drop in 2018. Those fears turned out to be valid.

On Jan. 16, the company announced that it had completed an insurance review, and would need to take a $6.2 billion charge plus set aside $15 billion in reserves to cover legacy long-term care insurance policies that were still being held by its GE Capital unit. That meant GE Capital would need to stop making dividend payments to the parent company, cutting off a crucial source of cash for the strapped industrial giant. The stock price took another hit.

Just eight days later, on Jan. 24, the SEC announced it was launching a probe into how the company had handled its insurance obligations. The probe will also look into how GE's accounting booked service agreements for equipment including power plants and jet engines.

GE has long used unorthodox accounting methods when reporting to the public (who can forget the infamous "Ending Net Investment" mystery metric GE rolled out in 2015 to evaluate its GE Capital holdings?), and as long as the company kept chugging along, nobody seemed to care much. But now, a shareholder has filed a lawsuit against GE, Immelt, Flannery, Bornstein, and Bornstein's successor Jamie Miller, accusing them of securities fraud.

Ironically, the severity of GE's current situation is one reason the company's best days may be ahead: It's hard to imagine what kind of surprise GE could roll out that could put the company in worse shape than it is now. Of course, that was what I thought last year, and look how wrong I was...

It could get better

The "it can hardly get worse" argument is likely to be cold comfort for longtime GE investors, who are now sitting on shares worth less than half what they were a year ago, and less than a quarter of what they were at their peak in the year 2000.

However, it's possible that the current situation is setting Flannery and GE up for future success. This is by no means a sure thing, but for the past several years, GE has been at war with itself: Things were OK but not great for the company, so there were big questions about whether to stick with "business as usual" and hope for outperformance, or to make radical changes to the company and its business model -- a risky approach, but one that could yield high rewards.

What ended up happening -- as it turns out, to the detriment of shareholders -- was a sort of "middle of the road" approach. GE mostly stuck with business as usual, while making some big risky bets that haven't (yet) paid off: Buying into the oil and gas sector at its peak, for example, or spinning off its financial services businesses as Synchrony Financial. It's worth noting that Synchrony shares are up 15.1% since the spinoff while GE's have fallen by 45%. Also, Synchrony's current dividend yield is more than three times GE's.

Today, however, it's pretty clear to everyone that "business as usual" hasn't worked, and isn't working, for GE. And with Trian Fund Management executive Ed Garden now on GE's Board, there is likely now more pressure than ever to shake things up. That could lead to a big payoff for shareholders.

A lot of things will have to go right for Flannery in order to even get GE back on track, much less make the company's future better than its past. And change doesn't come easy for a massive 100-plus-year-old conglomerate.

While GE's shares are looking downright cheap right now, I'm not buying more. That's because there's no guarantee that GE's management and board can succeed in this Herculean task...or if they do, how long it might take. While I'm holding my shares for now in the hopes that GE will find its way forward, it looks like we're probably in for a long, hard slog.