Here's how the oracle of Omaha could deploy some of Berkshire's $116 billion cash stockpile.

Warren Buffett has a problem. But it's a good kind of problem to have.

At the end of 2017, Buffett's Berkshire Hathaway (BRK.A 0.07%) (BRK.B 0.04%) was sitting on a cash stockpile, including cash and U.S. Treasury bills, totaling $116 billion. Here's what Buffett wrote to Berkshire shareholders about that huge cash position: "This extraordinary liquidity earns only a pittance and is far beyond the level Charlie and I wish Berkshire to have. Our smiles will broaden when we have redeployed Berkshire's excess funds into more productive assets."

Don't you want Warren Buffett and his partner Charlie Munger to have huge smiles on their faces? I do. Therefore, I've put together a short list of stocks in which the Berkshire leaders could invest and be happy about. Here's why AbbVie (ABBV 0.53%), Alphabet (GOOG -1.62%) (GOOGL -1.81%), and JPMorgan Chase (JPM -0.80%) would fit nicely into Buffett's investment portfolio. 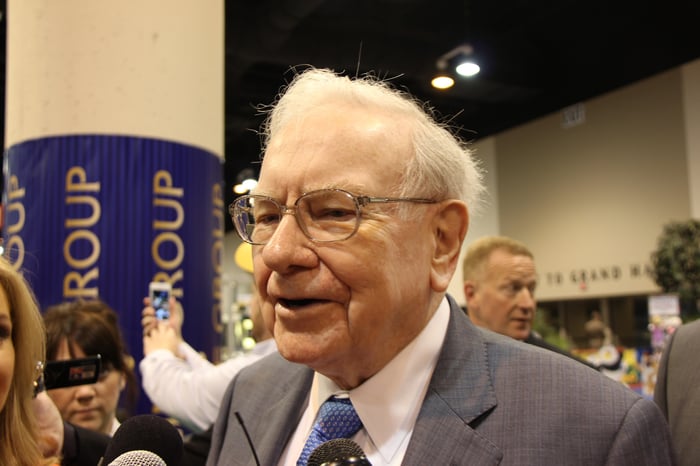 Berkshire already owns several pharma stocks -- Johnson & Johnson, Sanofi, and now Teva. None of those stocks performed as well as AbbVie over the last year. And none of them has the growth prospects that AbbVie does.

AbbVie claims the top-selling drug in the world with Humira. Thanks to an agreement with Amgen last year, Humira should enjoy several more years in the U.S. market with no competition from biosimilars. In the meantime, two of the company's other approved products -- cancer drug Imbruvica and hepatitis C drug Mavyret -- stand to generate tremendous growth.

But its AbbVie's pipeline that is really exciting. The company expects to launch at least 20 new products or indications by 2020. By 2025, AbbVie anticipates that it will have $35 billion or more in sales from drugs other than Humira.

Warren Buffett would probably like a couple of other things about AbbVie. The stock is priced attractively, with shares trading at less than 14 times expected earnings. In addition, AbbVie pays out a nice dividend, which currently yields 3.34%.

Buffett was slow to buy Apple stock, but he eventually took a big bite. I think there's another high-profile tech stock that would be a smart late-bloomer pick also -- Google parent Alphabet.

Alphabet claims a great moat for most of its products, including its Google search engine, YouTube video-sharing site, and Android operating system. And if there's anything Buffett loves, it's a solid moat.

The company is also a leader in multiple technologies that could be game changers. Its "other bets" include efforts to extend human life span and develop glucose-sensing smart contact lenses for diabetic patients. But I think Alphabet's greatest opportunity lies in artificial intelligence (AI). In my opinion, Alphabet ranks as the best healthcare AI stock right now and one of the top stocks targeting the self-driving car market.

Buffett wouldn't even have to worry about spending too much on buying a stake in Alphabet. The stock trades at more than 23 times expected earnings, but factoring in the company's growth prospects, it's even cheaper than Apple is.

Berkshire Hathaway owns nearly 10% of Wells Fargo. Buffett has held on to his large position despite scandals plaguing the financial services giant. And Berkshire owns several other bank stocks as well. But there's another big bank he could buy that could be a good fit -- JPMorgan Chase.

Interest rates are rising. That's good news for banks like JPMorgan Chase. The U.S. economy continues to perform well, which is yet another good sign for the company. And while Wells Fargo can't increase its total assets due to a huge penalty assessed by the Federal Reserve, JPMorgan Chase isn't limited in growing assets.

JPMorgan Chase fares pretty well in the key metrics that Buffett would likely evaluate, including efficiency ratio and return on assets. The stock is also valued attractively, with shares trading at 12 times expected earnings. In addition, JPMorgan Chase pays a decent dividend, which yields just under 2%.

Perhaps the biggest argument against buying JPMorgan Chase is the significant stakes that Berkshire owns in other bank stocks. However, Buffett stated in the past, "Diversification is a protection against ignorance. It makes very little sense for those who know what they're doing." Warren Buffett knows what he's doing when it comes to investing in the financial sector, so buying shares of JPMorgan Chase shouldn't be a problem for Berkshire.

No need to wait on Warren

Will Warren Buffett actually buy AbbVie, Alphabet, and/or JPMorgan Chase? I don't know. But I do think they compare favorably against some of the stocks that Berkshire already owns.

The good news is that you don't have to wait on Warren Buffett to buy solid stocks like AbbVie, Alphabet, and JPMorgan Chase. You can deploy some of your excess funds into these productive assets regardless of what Buffett does with Berkshire's $116 billion. In my view, these stocks are the kind that have the potential to broaden smiles like Buffett desires, especially over the long run.