At long last, President Trump announced his infrastructure plan last month -- and at $1.5 trillion in total value, it's about 50% bigger than we had been led to expect. Not everyone believes this plan will come to pass -- indeed, two days ago, a Bloomberg columnist voiced doubt after Senate Majority Whip John Cornyn demurred that Congress simply doesn't have time to address it this year.

But what if the plan does come to pass? In a move that should make it easier to keep an eye on the industry, and that could set it up to pick winners and losers as the infrastructure bill's prospects firm up, investment banker Morgan Stanley announced a whole series of picks this morning in the heavy industry space -- everything from truck makers to earth movers.

Here are two of the heavy industry stocks Morgan Stanley thinks you should buy, and one they'd suggest you sell. 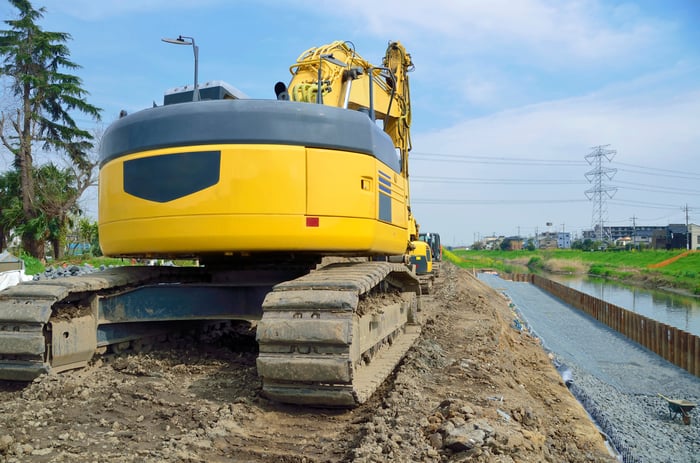 Beginning with the big name in the sector, Morgan Stanley rated shares of Caterpillar (NYSE:CAT) overweight and assigned the stock a $185 price target, as reported today on TheFly.com. If the analyst is right about that, investors in Caterpillar stock could potentially earn a 23% profit off of today's prices, and collect a tidy 1.9% dividend yield on top of that -- making for a nearly 25% total return over the next 12 months.

Most analysts who follow Caterpillar see the company posting strong, steady 10% annual earnings growth over the next five years, and Morgan Stanley appears to be broadly in agreement with that view. According to the analyst, the global economy is continuing to recover from its recent commodities slump, and key end markets are also recovering. Combined with channel checks that show inventories of heavy machinery are now "right-sized," Caterpillar should be able to grow its revenue at the same time as it expands its profit margin -- a good recipe for earnings growth so long as the recovery continues.

And buying Deere, too

Morgan Stanley is also a fan of Caterpillar rival Deere & Company (NYSE:DE), albeit more for that company's flagship agricultural machinery business ($20.2 billion in annual sales) than for its much smaller construction and forestry unit ($5.7 billion).

Most analysts on Wall Street see much more limited growth potential for Deere than for Caterpillar -- 5% projected long-term earnings growth, versus Caterpillar's 10%, according to analysts surveyed by S&P Global Market Intelligence. But Morgan Stanley believes Deere's profits will be lifted by the North American agricultural machinery "replacement cycle." The analyst is also hoping to see corn and soybean prices rebound, putting more money in farmers' pockets, and enabling them to spend more buying tractors and combines from Deere.

The analyst rates Deere overweight as well, and assigns the stock a $195 price target -- 24% above current prices, albeit with a smaller dividend than Caterpillar pays (just 1.5%).

Sadly for investors in truck maker Paccar (NASDAQ:PCAR), their stock gets no such love from Morgan Stanley. One of the few stocks the analyst rated underweight this morning, Morgan Stanley worries that Paccar's sales of Class 8 tractors (the truck part of a tractor-trailer) will peak this year within the NAFTA trade region, and could begin to slip as early as 2019.

It's worth pointing out that this is most decidedly not the consensus view on Wall Street, where analyst estimates on average predict Paccar's profits will grow even faster than Caterpillar's, and much faster than Deere's -- 12% annually over the next five years, in fact. Nonetheless, Morgan Stanley highlights an emerging threat from electric trucks such as the all-electric semi that Tesla unveiled late last year. That's a potential disruptor in the trucking business, and contributes to Morgan Stanley's pessimism about Paccar.

The analyst is therefore counseling that investors sell Paccar, and sees little chance of share price appreciation this year, predicting Paccar's price will be about $69 a share a year from now.

From a P/E investor's perspective, I have to say that Morgan Stanley's picks (and pan) this morning seem a bit curious. At 35 times earnings (and projected 5% growth), Deere stock hardly looks cheap enough to inspire a buy rating. Caterpillar stock, at more than 116 times earnings, appears to be wildly overpriced. In contrast, Paccar, at 14 times earnings, a 12% projected growth rate, and with a modest 1.4% dividend yield, appears at first glance the best bargain of the bunch.

That being said, closer examination of the companies' financials reveal that with just $869 million in trailing free cash flow, Paccar is actually generating cash profit at barely half the rate the stock's $1.7 billion in reported earnings would suggest, and so is arguably more expensive than meets the eye.

Deere, pricey from a P/E perspective, looks even more so when valued on its free cash flow -- of which it generated none in 2017, burning nearly $1 billion instead.

In contrast, Caterpillar generated positive free cash flow of $3.4 billion last year -- several times its reported $754 million in net income. At a price-to-free-cash-flow ratio of 26, Caterpillar stock is arguably actually the cheapest of the lot, despite its frighteningly high P/E ratio. I don't know that I'd say Caterpillar is cheap enough to buy based on growth expectations of only 10%, but I do know that it's the single Morgan Stanley recommendation today that I'm most inclined to agree with.