The company behind the successful Roomba vacuum-cleaner robots could deliver huge returns if it maintains a forefront position in its industry.

iRobot (IRBT -0.27%) has already produced impressive returns for shareholders who got in early, with shares up roughly 275% since its 2008 initial public offering. That performance comes even as the stock has lost roughly 20% of its value following the Feb. 7 release of its full-year earnings results, and there are reasons to think that the robotic-appliances company could still be in the early phases of a triumphant long-term growth trajectory.

If iRobot can continue to succeed on a few key fronts, it could be a goldmine for growth-focused investors. 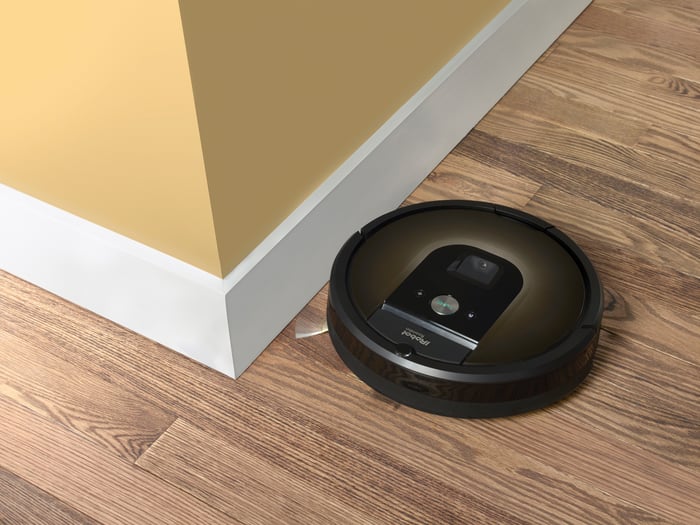 Leveraging its lead in a high-growth market

The following comment from the company's recent earnings report does a good job of summarizing some of the big growth opportunities on the horizon:

Global household penetration of robotic vacuum cleaners remains extremely low, in the single digits. Strong economic conditions worldwide are fueling overall global growth and positive consumer sentiment. We have demonstrated that in regions where we have run marketing programs to educate prospective customers about Roomba, we have increased our market share, and our recent distributor acquisitions enable us to extend our strategic marketing programs to Japan and Europe.

Even in the U.S., the market with the greatest penetration for robotic-vacuum-cleaner (RVC) devices, only around 11% of households own a product in the category. That suggests a long runway for growth, and iRobot seems to be making some smart moves to realize opportunities and sustain its position in the robotic-appliances space.

iRobot and its line of autonomous Roomba vacuum cleaners and Braava mopping robots are leading household-robotics brands. That's not the type of advantage that guarantees the company will remain at the top of its niche, but it's not something that should be disregarded, either. Brand strength is a big deal in the appliances market.

The Roomba line has more than 60% market share in the RVC category. That will probably trend down as more competing products arrive on the scene, but the good news is that the overall market is on track for substantial long-term growth as functionality improves and word of mouth and marketing initiatives build product awareness.

Worldwide sales for the RVC category grew 25% year over year in 2017 according to iRobot, and Research and Markets expect the category to grow at a compound annual rate of 22.5% through 2023. Mopping bots are currently the other big sales driver and account for a smaller share of iRobot's overall revenue, but there's evidence that advertising efforts in the product category have been effective -- with sales of Braava bots in the U.S. climbing 65% year over year in 2017.

The threat posed by new competition might also not be as big as it seems -- at least in the near term. iRobot recently reached a deal with Stanley Black & Decker that sees the latter company agreeing not to produce RVCs for an undisclosed period of time. That could be an indication that iRobot's patent disputes with companies including Hoover, Bissell Homecare, and iLife will also wind up with favorable results. If the company can defend relevant intellectual property and box competitors out of the RVC space or delay the entry of rival products, it stands to see significant mind and market share advantages.

iRobot's early start in the household robotics space means that it's gaining valuable experience in building out individual product features and inter-device functionality to meet household needs. The company already has lots of relevant data from its years as a leader in consumer-robotics hardware -- a head-start factor that could help it sustain a software advantage against competitors.

For core products like vacuum cleaners and mopping bots, the company already has relatively high-quality hardware solutions. That means it can devote more focus to developing software advances. Right now, that's taking the form of the company improving its mapping, mobile app, and connectivity technology. As its software becomes more advanced and the company introduces new devices, iRobot has an opportunity to create a product ecosystem that has a differentiated appeal to consumers even if there are more competitors on the market.

iRobot stock trades at roughly 28 times this year's anticipated earnings. That doesn't look cheap compared to the broader market, but it is a valuation that leaves room for substantial growth in light of the business' strengths and some positive trends.

The company sees its gross margin improving from roughly 47% last year to between 50% and 51% for the years 2018 through 2020, which indicates that manufacturing costs are falling relative to consumer pricing. Additionally, operating margin is expected to climb from roughly 8% in 2017 to 10% in the next three years even amid heavy marketing and R&D spending. iRobot also has a solid balance sheet working in its favor -- with roughly $166 million in cash and short-term assets against zero debt. That gives the bot-maker some leeway to continue funding acquisitions to improve its technology and strengthen its distribution channels.

With the household-robotics market still very young, it's best to proceed with the understanding that iRobot is not a low-risk investment. The company can't afford to rest on its laurels and will need to continue navigating changes in its industry, but it stands a good chance of delivering strong returns if it can maintain a forefront position in its corner of the connected-home-appliances market.